For my final HoboTrashcan article as a regular, I thought to myself, “Self, I could rail against Lindsay Lohan, or wax poetic about the tao of Patrick Swayze or perhaps talk about film and television circa 1994. You know. Things I always do.” But the universe had more in store for me. The universe didn’t want me to tell some shiny snarky viewpoint of the world of entertainment and celebrity.

Instead, the world gave me a hooker.

This past weekend, I went bridesmaid dress shopping with my two best friends (Item You Won’t Miss #1: Brief references to my upcoming nuptials that are incredibly brief because I don’t want you judging me for talking about my wedding, and still something I do because as a bride I am physically incapable of not referencing my upcoming nuptials). That task was completed very quickly, so we immediately moved onto hotel room ’90s dance parties and a trip to Gold Coast for some costly libations.

We decided to go to Tavern on Rush, a place that seemed far too grown-up for most of my time living in Chicago. But on this night, filled with adult bride-liness, I felt comfortable joining their ranks. Proper grown-up cocktails. I wore heels and eyeshadow and everything.

We saw her the moment we entered.

We saw a table that had been very recently vacated. Quita, the bravest (drunkest) of the three shot herself at the table like a lawn dart. But she’d been beaten to it by a very beautiful woman, possibly Pakistani, definitely wearing a Cleopatra wig.

The woman was alone, and we didn’t think much of her after that, as we were still stuck standing in a very busy room, holding our drinks and scanning the tabletops for checks that indicated we might possibly be able to sit soon.

About thirty minutes later (which is 2.5 hours in stiletto time) a douchey guy with a curly faux-hawk finally realized there was no one there for him to date rape, so he tossed a few dollars on the table, and we attacked it like a pride of lionesses and it was a broken legged gazelle we could sit on because our feet hurt.

We noticed that the pretty girl was still sitting alone, and we felt sorry for her. I thought, “She got all fancified and then got stood up.” She was wearing a very tight dress, obviously somewhat expensive, and distractingly sparkly shoes, covered in crystals. She sat alone, nibbling at a salad, sipping a pink cocktail. I felt bad for her. Being stood up didn’t seem fun.

Oh how naive I was.

After she’d been sitting for about an hour, this couple approaches, greeting her with hugs and kisses. I audibly said, “Finally. Jesus.” I was so pleased for her that her group had finally arrived.

I don’t remember which one of us finally figured it out, but things get very clear after this.

The couple was the exact couple you can imagine purchasing an evening with a relatively high-class call-girl. He was a bald man who worked out too much, dressed in the finest threads from the Ed Hardy business casual collection – a black button-down with a silver dragon on it. She was the kind of woman who was obviously incredibly beautiful fifteen to twenty years ago and is reluctant to mature, wearing an inappropriately short white skirt for her age, or my age, or my 12-year-old cousin’s age, and sporting a pair of fake breasts for which I’d request a refund, complete with nipples pointing directly to her own face. The kind of couple even my middle-class background looks at and thinks, “New money.”

Not exactly the kind of couple who has 25-year-old Middle-Eastern friends who wear tight dresses and sparkly shoes.

From the moment we realized what was up, we were riveted and I don’t think we looked away for the rest of the night.

One thing that is incredibly important to note, and was, perhaps, the biggest giveaway: the couple was all over each other. Did you ever see that clip of Billy Bob Thornton and Angelina Jolie on a red carpet when they first got together and she’s rubbing against him like a kitten, completely high, and he says they just had sex in the car? This couple was exactly like that. The wife was leaned back into her husband the entire time, hands everywhere, hers completely disappeared beneath the table. Cleopatra-hair sat very businesslike, until she stood up and started dancing a little, then wrapped her arms around the wife, who responded by rubbing her very awkwardly.

At this point, things were getting a bit uncomfortable, and we ended up leaving. Not due to the discomfort, but it didn’t exactly keep us around.

I’m not a prude, and I am fairly neutral on the issue of prostitution. If a consenting adult wants to peddle her “skills” to the highest bidder, and it’s not a tragic tale of desperation to feed her family or meth habit, then it really doesn’t affect me and she can do what she wants. I felt sorry for the wife.

We watched these people for a while, and, yes, with the aid of a couple glasses of champagne and a gin and ginger ale, I become a big fan of creating stories for people that will then become fact, but I really felt like this husband, this obviously douchey man, got his wife to participate, even want to participate, under the promise that it would make him attracted to her again. This did not appear to be a woman confident in herself or sexuality, trying something new that interested her. This was a woman desperate to stay attractive and interesting to her husband, even if that meant sharing his (and her) body with a stranger.

My excitement at seeing my first real life upscale escort was eventually overshadowed by this sad, possibly fabricated backstory. What was fun and new became a little depressing.

Which leads me to my feelings about leaving HoboTrashcan. (I majored in segues at the School for Conversational Laziness).

I am very excited about my new gig with Pajiba (as well as all the personal life and real-life job stuff) and I hope my loyal readers (I know you’re out there, even if you don’t comment [is what I tell myself on slow days]) will stay loyal to Hobo Stu while still checking me out over there, but HoTrash has been part of my life for three years, when I wrote my very first OOTIC – a dry little piece about indie backlash, very clean and free of the fuck words that would pervade my later work. I’ll miss it around here, and I want to thank Joel for all he’s done for me, throwing a bone to a random chick with a snarky MySpace blog back in 2007.

Those who’ve read me most of this time, thank you. Stay with me, stay awesome, and watch The Crush. You won’t be sorry. 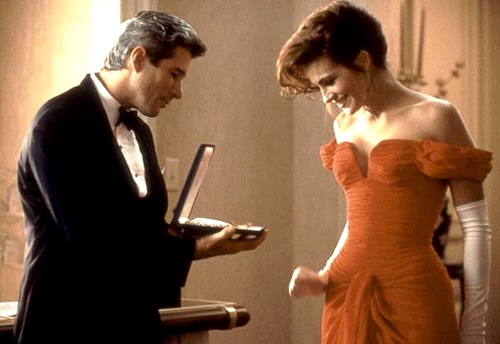