This week’s inductee into the “Overrated Hall of Fame” is … copious amounts of toppings.

America has taken the concept of “excess” and made it an art form. It’s bad art, much like Andy Warhol’s overhyped output, but it’s still something to behold, to look at with a mixture of disgust and awe. We’ve got buffet chains, eating contests and Super Walmarts. We’ve got Black Friday, the Super Bowl and Hummers. The list is extensive.

But of all the things Americans do to disgust me in the excess department, nothing makes me sicker than the way we ruin classic comfort foods by adding too many toppings and extras, rendering perfectly good hamburgers, pizza and whatever else into culinary catastrophes devoid of flavor and unable to provide true eating satisfaction.

I first noticed this addiction to extra-ness when I was a teenager working in a pizza restaurant. It wasn’t the fact that two of our biggest sellers were the 5- and 7-topping specials we sold. (Well, I guess it was a little bit of that.) If you followed the restaurant specs while making those pies, there was very little of each topping on either pizza. It was still gross, but it was a manageable mess.

What used to make me wince were the idiots – usually females between the ages of 15-30 – who would ask for extra cheese on whatever pizza they’d order.

Extra cheese always ruins pizza. The dough doesn’t cook right, the toppings don’t cook right, and the eating of an extra cheese pizza requires so much intensive chewing power that you need to re-energize your tired, aching jaw muscles with a mid-meal Powerbar by the second slice and all that stringy extra cheese becomes difficult to swallow. I bet there’s more choking involved with extra cheese pizza than there is at Washington Capital playoff games.

This exhausting and potentially life-threatening extra cheese experience might be worth it if it made the pizza taste better, but all it does is render the rest of the pizza flavorless. You can’t taste the toppings or crust (and the crust is what makes a pizza great or ordinary) because their flavors are defeated by the extra cheese. The best pizzas have very little of any one topping, including cheese. Yet so many morons have to order extra cheese because they seem to equate excess with a sense of accomplishment.

Hamburgers also fall victim to this hateful heaping o’ the toppings. Excessors, as I call these idiots, seem to order their hamburgers with the belief that more toppings equal more flavor, or more masculinity, or more coolness …who knows … so they add onions, tomato, lettuce, pickles, bacon and two or three condiments. And of course, they can’t eat a hamburger without cheese, which usually can’t be tasted on a hamburger anyway, especially if it’s covered with an onslaught of vegetables and sauces. It all becomes a gooey, sloppy mess with no distinctive flavors.

Hamburgers aren’t the only sandwiches that excessors ruin with too many extras. Ever had an authentic Philly cheesesteak? (No, Mr. Applebee’s Addict, you haven’t.) It’s perfection on a hoagie roll. Fried, thin-sliced ribeye, onions and cheese. That’s it. But stand in any South Philly cheesesteak line long enough, and you’ll see an excessor have them add tomatoes, lettuce, jalapenos and pickles. It’s like adding a bouncy song and dance number to Hamlet.

Most sub shops even cater to these cretins by including on their menus some form of death-wich with an exceedingly clever name like the blimp, the belly-buster or the stomach stretcher. These usually involve a supersized roll crammed with four types of meat, two cheeses and six other toppings. Ever watch people create their own subs at Subway? They have the beleaguered kid behind the counter toss in every wilted item in the stainless steel bins, just because they’re available and “free.” Can anyone truly enjoy – let alone actually taste – pickles, black olives and two kinds of hot peppers on a sandwich already over-burdened by green peppers, tomatoes, onions and lettuce?

Even the classic American hot dog gets abused. All a hot dog needs is one or two additions. Chili and cheese are okay. Mustard and onions work. But have you ever seen or eaten the famous Chicago hot dog? The only thing sadder in Chicago is the endless of optimism of the annually duped diehard Cubs fan who believes that Cub ownership actually tries to put a winner on the field and fails to recognize that the owners’ main interest is in reaping insane profits by selling the quaint Wrigley experience instead of truly competitive baseball. But that’s another column.

The Chicago hot dog takes a beautiful, flavor-filled kosher hot dog and buries all that flavorful goodness under yellow mustard, a dill pickle spear, tomatoes, onions, relish and pickled peppers. It looks like someone emptied a dustpan on the overwhelmed dog after sweeping up a Denny’s kitchen.

Fries are another nearly perfect food that need just one addition to create perfection, and we sure as Heinz know what that addition is. But excessors ruin the best potato creation ever invented by adding gravy and sour cream and cheese and bacon bits and whatever didn’t come off that dustpan when it was being dumped onto a Chicago dog.

I’m not sure what the psychology is behind this national addiction to the mountain of more-more-more. I’m guessing all this ugly over-consumption compensates for some kind of inner emptiness. (Which I guess also explains my drinking.) Maybe I’m overanalyzing, but something has to lie behind the way these sad people sacrifice flavor and true eating pleasure for pure excess. Maybe they have so little true substance going on inside that they try to fill that void by having it all and then some when they eat.

This fattest country on the planet will continue to get fatter as long as we condone and even laud all this topping excess. Waffles and pancakes will continue to be slathered with creams and goos and sugared fruits. Guy Fieri will continue to get big ratings by seeking out diners, drive-ins and dives that specialize in creating over-topped sandwiches that look like so much vomit on a bun. And someone will get rich by jamming gummi bears into a calzone.

And the excessors will continue to gorge on wretched excess, never learning what it’s like to savor flavor over volume. And I’ll continue to hate these excessors. But despite my hate, I hope I don’t ever break down and call them what I’d like to call them: Over-indulgent Children Trying to Fill the Emotional Abyss that Is Their Inner Selves with a Culinary Gangrape of Their Food. Or maybe that’s what they’d prefer to be called. After all, it’s a bit excessive. 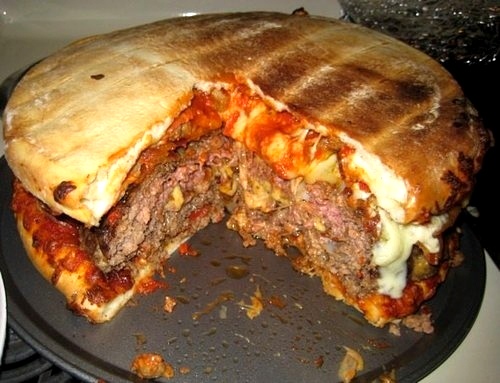