Spring is upon us once again. After a long and grueling winter, the snow has finally melted, the birds have all returned and nature itself sees to be telling us it’s time to get it on. This is, of course, great news for those of us lucky enough to get lucky. But what about all of the virgins among us? What are they supposed to do during these days of short skirts and sunshine?

Fear not, virgins. Just because you won’t be knocking boots this spring doesn’t mean you can’t still do some amazing things. Remember the episode of Seinfeld where George Costanza gave up sex and became a genius? Like George, with all of the extra time on your hands, you are free to do amazing things.

So to help inspire you to be all that you can be, I’ve compiled a list of some of cinema’s greatest virgins – men who channeled their lack of sex into other avenues and were able to accomplish some pretty amazing things. Hopefully this list will help you realize that even though you are going to bed alone each night, you are still in some pretty great company.

So without further ado, here is my list of movie heroes who were (probably) virgins …

April O’Neil seemed like a pretty open-minded girl, but somehow I think she would draw the line at interspecies love. And since there were no female ninja turtles and since they lived in seclusion in the sewers, I think the boys spent a lot of lonely nights eating pizza and skateboarding all by themselves.

9. The MacManus Brothers
(The Boondock Saints)

Have you seen their apartment? The bare walls, the dirty toilet, the twin brother sleeping just a few feet away – none of that screams “irresistible bachelor pad.” Besides, the closest either one of these two comes to feeling the touch of a woman in the film is when Connor gets kicked in the balls by and Murphy punches the face of their angry feminist meat packing coworker.

This one should be obvious. Only a virgin with too much time on his hands would put that much thought into the sex lives of Smurfs. It’s hinted that perhaps Donnie had sex with Gretchen at the Halloween party, but even if he did, it’s negated when he decides to go back in time. At least I think it is. Frankly, I’m still not sure exactly sure what happens at the end of that film.

Sure, Riddick is technically an antihero, but that doesn’t change the fact that he spends his nights cryo-sleeping alone. His goggles and creepy eyes seem like enough to repel most women, but that’s beside the point. He seems asexual. Riddick definitely enjoys creeping out Carolyn Fry, but at no point did I get the feeling that he wanted to actually have sex with her. Cut locks of her hair and keep them under his pillow? Sure. Borrow a pair of her high heels to prance around in? Perhaps. But actually have sex with her? Not a chance.

Let’s be honest here, hanging out with the Frog Brothers and devoting all his time to reading vampire comics was essentially Sam throwing in the towel and realizing girls really weren’t going to be factoring into his immediate future. 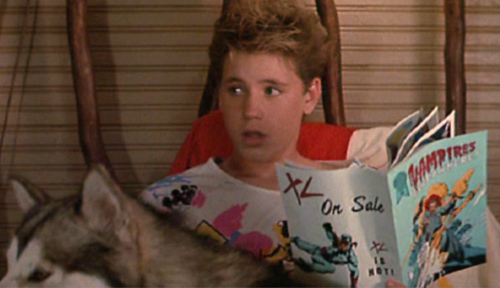 Speaking of vampires – Twilight isn’t the only vampire film about abstinence. Blade is suppressing more than just the urge to bite girl’s necks. Hooking up with Dr. Karen Jenson never seems to cross his mind. Perhaps it’s the multitude of mommy issues he’s dealing with, but whatever the case, the only thing Blade is stabbing is vampires.

Look at Mr. Anderson’s life before he’s rescued by Morpheus and the gang. He spends his days in a fog going back and forth between his cubicle job and his drab apartment. The chick with the white rabbit tattoo seems totally down for anything and yet it takes an IM from Trinity for Neo to even notice rabbit girl exists. Besides, since nothing in the Matrix is real, even if you are convinced Neo has had sex in the past (which I am not), it didn’t really count. It was nothing more than a computer simulation.

(And yes, I know Neo has sex with Trinity in The Matrix Reloaded. But isn’t it better if we just pretend that that film – and that scene in particular – never happened?)

3. Marty McFly
(Back to the Future)

Believe it or not, even in the 80s, ladies weren’t exactly throwing themselves at the nerdy kid rocking the denim jacket/orange vest combo. (Though clearly the 50s version of his mom was all about it – but the less said about the film’s creepy Oedipal undertones, the better.) Sure, he was with Jennifer Parker, but everyone knows Elisabeth Shue was a total prude. They do have two kids together in the future, but Marty Jr. and Marlene don’t actually look like they have any of Jenny’s DNA. My money is on them being futuristic lab-grown Marty clones.

Anyone really want to argue with me on this one? Besides, like I said, Elisabeth Shue is totally a prude.

It’s no coincidence that so many virgins have flocked to Star Wars fandom over the years. Go back and watch Luke’s introductory scene in A New Hope. There is zero chance the whiny, desert-dwelling, moisture-farming teenager who spends his days bitching about his lack of power converters is getting any action. Why do you think he is so desperate to run off and join the Academy? Even as he goes on to become a great Jedi who saves the galaxy from a tyrannical ruler, the only action he gets is a kiss from his sister. 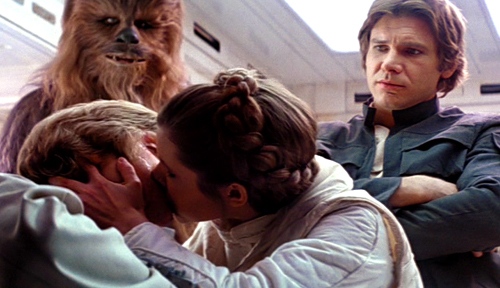