I’ve seen the trailers and TV spots. I’ve scrolled past the cast interviews on movie sites. I’ve even double and triple checked the IMDB page just to be sure. But I still have to ask – are we really doing this?

Is there really a Scream 4?

You would think after so many reboots, remakes and “reimaginings” that I would have become numb to this sort of thing by now. But yet, my brain still can’t really accept this. It just seems like an extreme exercise in futility.

The first Scream film was by no means a masterpiece, but it was at least clever. Overrun with cliché slasher films, the horror genre had gotten stale and overly formulaic. Scream played with those clichés by having characters who were, essentially, aware that they were in a horror film. They joked about the “rules” of horror movies, like how anyone who had sex was killed off first and how victims made the mistake of running up the stairs instead of out of the house. It was all very meta, but it was at least fun and made the film seem original, something the genre desperately needed.

Of course, then like the horror movies it was poking fun at, the franchise began producing pointless sequels. Scream 2 upped the meta quotient by giving us Stab, the movie-within-a-movie based on the events of the first film. Scream was already mocking the horror genre by having characters who were aware they were in a horror film, so by adding Stab to the mix, they completely demolished the fourth wall. (On the bright side, Scream 2 did open with Omar Epps getting stabbed in the head which, after years of sucking the energy out of every scene he’s in on House due to his complete lack of charisma, is officially the most interesting thing he’s ever done.) Scream 2 wasn’t a terrible film though, it was just redundant.

But now we are officially living in a “post-ironic” society. People have gone from laughing at the ridiculousness of Snuggies to proudly wearing them in their homes. We mock the cast members from Jersey Shore, but they still get rewarded with huge salaries, product endorsements and book deals, essentially making them legitimate celebrities. Rebecca Black’s song “Friday” skyrocketed to the top of iTunes after people bought it to make fun of how cliché it is. You can make big money these days being a joke. The line between “legitimate” pop culture and the ridiculous isn’t just blurred, it’s nonexistent.

And it’s into this world that we get Scream 4, which now just seems like another pointless reboot. Sure, a decade after the last film, there’s plenty to say about where the horror genre has gone. If anything, horror is in even a worse place now than it was a decade ago. The trailer talks about “new rules,” like the fact that virgins can die now, murders must be more extreme and that plot twists have become the new cliché. It even uses hand-held cameras like so many horror movies these days do. (All it’s missing is a creepy little kid or an evil dwarf.) But it still just feels like white noise – the parody has become the stale movie franchise it was created to mock. Why should we care?

To really make an impact, I feel like they need to double down and get even more meta. Scream 4 should offer us Stabby Movie, the movie-within-a-movie parody film that sprung up to mock Stab and is comprised of nothing but outdated pop culture references and fart sound effects. Then the characters could lecture us on how to survive a terrible parody movie.

Or, if they really wanted to take the meta up to 11, they should include the Shannon Doherty Scream parody scene from Jay and Silent Bob Strike Back and have the killer in Scream 4 turn out to be a monkey. (After all, as Wes Craven explained in that film: “The market research says people love monkeys.”) Best of all, it could help even help lead the way for Good Will Hunting 2: Hunting Season.

But sadly, none of that is going to happen. Scream 4 will most likely prove to be just another pointless sequel from a franchise no one cares about anymore. Seltzberg will probably parody it. The horror genre will continue to feel stale. David Arquette will sadly continue to get paychecks. And, after sitting through the inevitable Scream 6 and Scream 7, we’ll all find ourselves wishing someone in a ridiculous ghost mask would come stab us and put us out of our misery. 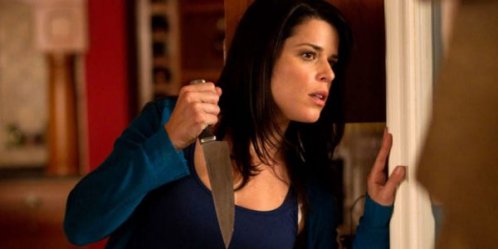