Halloween is a great time of year to revisit your favorite horror movies. Over the years, the silver screen has given us so many memorable villains who stalk our protagonists and make their lives a living hell. So there’s nothing better than curling up on a couch with an easily frightened loved one and watching all of your favorite movie monsters wreak havoc on everyone in their path.

But thanks to the magic of movie editing, we only see these monsters when they are coming at our hero from around the corner or dramatically sitting up a moment after everyone thought he or she was finally dead. We never get to see what these characters do when they aren’t seeking revenge on those who wronged them.

So this week, I thought I would give you a glimpse into the secret lives of film’s greatest horrifying creatures. Here’s what your favorite movie monsters are doing in their downtime …

Carrie – Looking up former classmates on Facebook to see who got fat. Also, Farmville.

Count Dracula – Having a Twilight film marathon and secretly siding with Team Jacob.

The Gatekeeper – Looking for the Keymaster.

Leatherface – Experimenting with different exfoliating creams and facial scrubs to finally get a good skincare system in place. Also, revving up the chainsaw at all hours of the night for no good reason.

Buffalo Bill – Trying to find someone to help move his new couch into his house. Also, purchasing a “No Fat Chicks” t-shirt to wear ironically.

The Keymaster – Looking for the Gatekeeper.

The Wolfman – Yard work, getting his oil checked, a little light shopping, joining a bowling league, catching up on episodes of Two and a Half Men on cable, working a dead end job that he hates, applying for a promotion he secretly hopes he won’t get because it’s only slightly more money and a whole lot more responsibility, saving for his retirement, wishing he and his friends from high school had kept their band together and started touring like they always planned, having dinner with his girlfriend’s boss and his annoying, opiniated wife, making an appointment to see his dentist, cheering for the Cardinals, watching his cholesterol … but mostly, just staring up at the moon and letting out a long, heavy sigh.

Jaws – Looking for a bigger boat.

Anaconda – Watching Snakes on a Plane again. Singing “Baby Got Back” loudly and off-key.

Godzilla – Helping to rebuild Japan … so that he can destroy it once again.

Jason Voorhees – Finally getting professional help for all of his various mommy issues.

Alien – Thinking of joining Bates/Voorhees support group in order to deal with various issues with the Queen, but he isn’t sure he has the courage to walk through the door. Considering just burrowing his way into the chest cavity of one of the other members.

The Blob – Hitting up an Old Country Buffet.

The Thing – Looking at self in mirror, sobbing uncontrollably and thinking: “I don’t even know who I am anymore.”

The Predator – Giving his victims time to bleed.

The Birds – Pooping on statues.

Poltergeist – Working up the courage to ask out the ghost from Paranormal Activity.

Chucky – Saving up all the money from his paper route to buy one of those real dolls.

The Gremlins – Hitting on that sexy lady Gremlin. Also, accidentally hitting on Willem Dafoe in drag.

Dr. Jekyll – Trying to figure out what Hyde did with his favorite sweater.

The Mummy – Plotting his revenge against Brendan Fraser … then catching Furry Vengeance on Netflix and realizing the man has suffered enough.

Swamp Thing – Just kind of hanging out in the swamp, really. 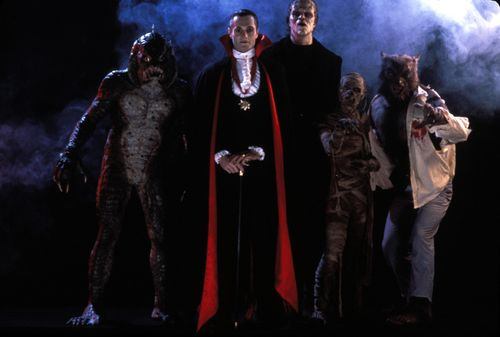