Fox Business Channel anchor Eric Bolling has been getting national attention for claiming that The Muppets, which features a villain named Tex Richman, is part of a liberal conspiracy to brainwash our nation’s youth into sympathizing with the left wing. Now, whether or not “Being Green” is secretly about the challenges of being eco-friendly or “Rainbow Connection” is attempting to push some kind of gay agenda, Bolling’s main argument was that Hollywood has a liberal bias.

This site is by no means a political one. But it is a pop culture site. And since Bolling argued that staunch conservative values are not well-represented in children’s shows and films, I thought I would compile a list to assuage his fears. So I have come up with six offerings that are brainwashing our children with right wing values instead of those pinko commie left wing ones.

(Note – I realize I’m opening a huge can of worms with this column, but please know it’s in the spirit of fun. Please don’t let this devolve into an angry political debate in the comments.)

This movie is practically the poster child for the NRA. A man must do whatever he can to protect his home from burglars. Kevin may not have used a gun on the thieves, but he certainly used every weapon at his disposal, including a paint can and a tarantula. The world is a scary place and we must do what we can to protect ourselves. (And besides, wasn’t the burglars’ evil scheme essentially a “War on Christmas,” which is why they needed to be stopped at all costs?)

Not only that, but Kevin was incredibly independent. With his parents out of the picture, he could have easily turned to the government for a handout. But instead of sucking on the government teat, he clipped coupons and got by on what little money he had.

In his tirade, Bolling said the following: “You’ll see all these movies attacking the oil industry, none of them reminding them what oil means for most people. Which is fuel to light a hospital, or heat your home, or maybe fuel an ambulance to get you to the hospital.”

What better argument for oil than the Transformers? They are fighting robots that turn into cars. The leader of the good guys runs on a diesel engine. If you told my eight-year-old self that no more oil meant no more Optimus Prime, I may have invade Iraq on my own.

Speaking of pro-oil, how about the 1961 Ferrari 250 GT California that Ferris convinces Cameron to let him borrow in this film? Forget fueling an ambulance, I’d love to load that awesome car up on gas and take it for a spin.

Not only that, in the film Ferris pretends to be Abe Froman, the sausage king, who is clearly part of the one percent. If a kid as popular as Ferris is pretending to be a captain of industry to get into a swanky restaurant, clearly the rest of us will aspire to become Fromans ourselves. Not only that, the entire “Save Ferris” campaign at his school shows that we don’t need a national health care plan to pay costly medical bills.

Has there ever been a better argument for capitalism? Scrooge McDuck got to swim in a giant vault full of money – how awesome is that? Not only that, his excess wealth allowed him to solve mysteries and rewrite history. If Scrooge needed the government to deregulate a couple of things to help him stay one step ahead of the Beagle Boys, I think most kids in the 80s would have been on board with that.

What better way to brainwash kids into supporting an increased military budget than with G.I. Joe? With Cobra using their vast resources to build deadly things like the Mass Device, the Joes need all the money they can to stop them. All of those awesome jets and fancy laser guns aren’t cheap.

There’s no one cooler than Batman. And who is Bruce Wayne if not a model for staunch conservatism? He’s a billionaire who uses his vast wealth on private planes, fancy cars and high tech weapons. And he uses those weapons to turn Gotham City into his own private police state. Not only that, but one of his biggest villains is a tree hugging hippie who uses plants to try to kill him.

In The Dark Knight, Batman creates a high tech wire tapping device that allows him to spy on every citizen in Gotham via their cell phones. And he goes to China to illegally extract a man to bring him to justice. If I ran the GOP, I’d be using the red Batphone to ask the Dark Knight to run for President next year. 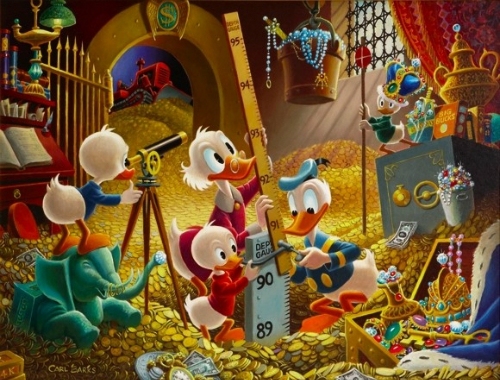