As anyone who has followed this column already knows, I spent a significant amount of time in my formative years listening to The Don and Mike Show. With radio, even more than television, you create a bond with the shows that you listen to and the people you welcome into your home or into your car begin to feel like family. So perhaps it’s fitting that Road Trip 2011, the newly released DVD from the Mike O’Meara Show, feels like watching a cherished friend’s home movie.

This is the DVD’s biggest strength and its biggest weakness. On the one hand, the film does a great job capturing what it’s like to hang out with Mike, Buzz Burbank, Robb Spewak, Oscar Santana and the rest of the crew as they drive 1800 miles from Manassas, Virginia to Iowa City, Iowa to do a live broadcast from a Hawkeyes game. You get a sense of the real camaraderie these men have with each other and all of the silliness that takes place when they are in the same room. However, like most home movies, you also get a lot of excess footage that isn’t very fun to watch if you weren’t there to experience it the first time.

The best moment are the ones where the guys are joking around with one another, busting Robb’s balls for wearing “mom jeans” or busting business manager Marc Ronick’s balls for leaving their company credit card behind at a gas station, causing them to have to turn their RV around (and then somehow still leaving the card again at a restaurant). There is also a great scene late in the film that simply involves Robb joking about Halloween candy.

Fans of the gang’s infamous drunk shows will also enjoy all of inebriated shenanigans that take place on the trip. Quite a lot of the film involves the boys drinking and looking for trouble, including at a fan gathering at a German restaurant and inside an empty karaoke bar. These outing also lead to some interesting interpersonal conflicts – as the first gathering causes Buzz to get annoyed in the most polite and Midwestern way possible as the gang get wildly behind schedule and another outing has Oscar down seven cocktails in record time and then abruptly head back to the hotel without any real explanation.

One thing the film is lacking are more “talking head” interviews – the sort of explanatory moments we’ve become accustomed to on reality shows and documentaries where a person looks directly into the camera and gives the viewer background information. It would have been nice to see Oscar explain why he wandered off in a talking head or hear Mike’s thoughts on Buzz’s failed effort to keep everyone on schedule. The movie’s only attempt to provide a “talking directly into the camera” moment comes at the end of the film, when each person sums up their overall experience on the trip. However, there is unfortunately so much background noise during the interviews that it’s very difficult to hear what everyone is saying.

Which is actually part of the film’s biggest overall problem – the editing and composition of it. An outside company was used to film the trip and to edit the footage together, though it’s hard to tell that from the finished product. The shots are often poorly conceived. Most of the footage inside the RV comes from a camera set on top of a counter. Not only does this limit what the viewer is able to see (which turns out is mostly a lot of Robb and Mike seated next to each other in the back of the RV and not very much Buzz, who sits in the front seat navigating), but quite often random items like food wrappers or laptops have been left on the counter sitting in front of the camera. There are also a lot of oddly chosen angles throughout the film, including quite a few shots taken from waist level shooting up, which is not really flattering for anyone involved.

More care should have been given to the editing too. Scene often go on too long and transitional moments which could have easily been conveyed through jump cuts are shown in their entirety. (For example: when Mike decides to get a musician to play “Happy Birthday” for Robb – even though it isn’t actually Robb’s birthday – we see Mike talking to the guy and then their entire slow walk over to the table instead of just cutting over to Mike and the musician at the table.) There are also moments like the aforementioned karaoke outing that overstay their welcome. We really don’t need to see snippets of every single song performed, especially when one of the bonus features is additional karaoke footage.

Speaking of the bonus features, the second disc is where this DVD really shines. In addition to the karaoke stuff, there are three different hour-long podcasts included – one from KCJJ studios, one from their hotel room and the live broadcast from the Hawkeyes game. These three shows are where the gang really shine. Having heard these guys play off of each other on the radio for years, it’s really enjoyable to actually get a visual to go with it. Seeing them in the room together doing a show is sure to be a real treat for any longtime fans.

So while a few technical difficulties keep this from being an instant classic, I do think that the show’s most devoted fans – the ones who consider Mike and the gang part of their family – will enjoy this two-disc set. And hopefully this will lead to more DVDs from the gang, like the long awaited sequel to Sex, Pies and Videotapes. 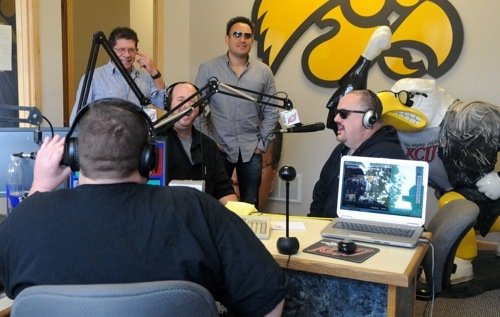