Being single on Valentine’s Day has its ups and downs.

On the bright side, I’ll save money not having to buy candy or flowers and I won’t have to deal with chaotic mall crowds as I attempt to build-a-bear for the one I love. Plus, I don’t have to go see Katherine Heigl’s latest “movie” in the theater.

But, on the downside, it means that February 14th will be a 24-hour reminder that I am all alone. And as the years go by, the odds become increasingly likely that I’m going to end up some sad old man in Crocs and a house coat peering out my windows to see if the neighborhood kids sent another damn football into my backyard or keeping an eye on that shifty mailman who I just don’t quite trust for some inexplicable reason.

Instead of focusing on the loneliness though, I’m going to forget about women altogether on February 14. If Leslie Knope can have “Gal-entine’s Day,” I figure I’m entitled to spend the holiday focusing on sparking a new “Bro-mance.” So like I did in 2010, this year I’m breaking out a list of my top five man-crushes, in hope one of them will want to bro out with me next Tuesday.

Why he’s a man-crush: As the founder of Craft Restaurants and the head judge on Top Chef, Tom Colicchio knows good food. And everyone knows that the fastest way to a man’s heart is through his stomach. His take-charge attitude and his knowledge of the culinary arts make him a perfect bro to have around.

How we would spend Valentine’s Day: Eating great food at a five-star restaurant and then critiquing every minute detail of the meal. Reminiscing about when Tom had hair.

It might get awkward if … he accidentally called me Padma.

Why he’s a man-crush: Joss Whedon should be every nerd’s man-crush. Firefly is one of my favorite shows of all time. Serenity is one of the five movies I’d want with me on a desert island. Dr. Horrible’s Sing-Along Blog was funny, touching and a nice poke in the eye to the studio system. Plus, he directed The Avengers which, from the trailers surfacing lately, looks incredibly bad ass.

How we would spend Valentine’s Day: Having some of those trademark witty conversations Whedon is know for. Getting into bar fights and having an undersized, attractive female show up to win the fight for us. Watching Serenity and getting my own personal director’s commentary.

It might get awkward if … he tried to kill me off like that son of a bitch does with his beloved characters.

Why he’s a man-crush: NPH has been unstoppably awesome in recent years. His cameos in the Harold and Kumar films have been legen-wait for it-dary. He completely nailed the lead role in the aforementioned Dr. Horrible and every other musical he has been cast in. And Barney Stinson is increasingly becoming the only watchable part of the ever-declining How I Met Your Mother.

How we would spend Valentine’s Day: We’d suit up and go see a Broadway show.

It might get awkward if … he’s actually anything like the Neil Patrick Harris from the Harold and Kumar films.

How we would spend Valentine’s Day: The possibilities are endless. We could kick off our shoes, strip down to our undershirts and climb through the AC ducts. We could hit up a local karaoke bar and have Bruce show off his singing chops. Or maybe we’d just spend the afternoon prank calling Ashton Kutcher.

It might get awkward if … I tried to convince him I knew the twist ending of The Sixth Sense the whole time.

Why he’s a man-crush: Morgan Freeman’s voice is like velvet and he’s one of the greatest actors of our time. Whether he’s playing Joe Clark in Lean on Me, Red in Shawshank Redemption or God in Bruce Almighty, you know he’s going to give you an amazing performance and he’s going to sound damn good doing it.

How we would spend Valentine’s Day: Cuddling up under a blanket with some hot cocoa watching March of the Penguins.

It might get awkward if … he kept telling me how much he missed Andy. 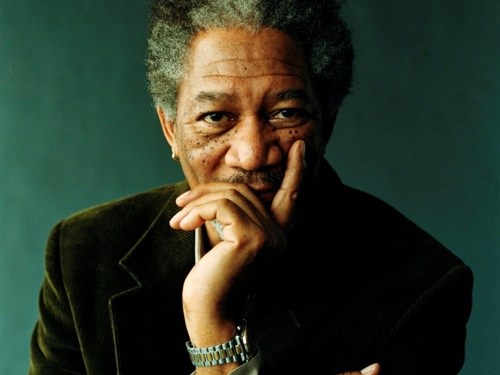