“You know what the trouble is, Brucey? We used to make shit in this country, build shit. Now we just put our hand in the next guy’s pocket.”

It’s fitting that Funny or Die released a parody video featuring a Wire musical this week, since Frank Sobotka perfectly summed up my problem with modern TV and movie musicals. Oh sure, Frank was talking about the ports and factories in this country, but he could have just as easily been talking about the music scene.

I had been hearing a lot of buzz about Rock of Ages. Many people have been saying that this is going to be a career-altering role for Tom Cruise, one that finally helps us all forget about his couch jumping Scientology craziness, getting us to go back to the good ol’ days when he was playing shirtless volleyball with Iceman and Goose. So I was excited to finally see the trailer and find out what all the hype was about.

Then I actually saw it.

And any optimism I had about reliving the glory days of Mr. Cruise quickly vanished.

A tag line promises that Rock of Ages is “a new kind of musical.” But the opening song is a very bad cover of Journey’s “Any Way You Want It.” From there, we are “treated” to a montage of singers gyrating and overemoting to a variety of Top 40 rock songs. In the midst of it all, we are told that Cruise’s character, Stacee Jaxx, is some kind of rock god, but he seems to sing nothing but covers of other people’s songs. I can’t see how that’s a very viable career.

It was mildly entertaining when Moulin Rouge came out in 2001 featuring a soundtrack of familiar pop songs. It felt like some strange genre mash up that you hadn’t really seen before. It was less charming when movies like Across the Universe and Mama Mia followed suit. Then Glee came along and took a genre that was already annoying and officially crossed it over into douchebaggery.

Here’s a simple rule: if you want to be a musical, you have to write original songs. If you are just covering other people’s music, that’s called karaoke. And if I wanted to hear karaoke, I’d go to a dive bar and down a couple of Guinnesses so that I could tolerate hearing “Sweet Caroline” and “You Never Even Called Me By My Name” slurred out by some drunk who doesn’t even have enough self-respect to be doing it ironically.

Glee has more number one singles than The Beatles. Let that sink in for a second. A show that featured Gwyneth Paltrow singing a PG version of a CeeLo Green song has more number one hits than the band that most consider to be the greatest rock group of all time. (Side note: Gwyn, lay off using the N-word on Twitter. You don’t have that kind of street cred, regardless of whatever that guy from Coldplay might have told you.) Worst of all, they didn’t write a single one of those number one hits. They were all covers. And poorly done ones at that.

I just don’t understand the appeal. I prefer my rock songs to be sung by leathery rock stars in chaps with gravely voices coated with whiskey and cigarettes. When a singer tells me that we’re in the jungle or he’s iron man, I want him to sound pained to do so. I don’t want some bright-eyed 22-year-old punk with gelled hair and a squeaky voice to sing the song like it’s a third grade pageant and his mom promised him ice cream after the show if he does a good job. Stick to playing Party Bingo, Junior, and leave the rocking out to the professionals.

Besides, it’s lazy. You are the one who decided to do a musical. No one forced you to do it. So if you are going to do something in that genre, write some fucking songs. Guys who write dramas aren’t allowed to just have their actors break into monologues from other shows, so you shouldn’t be allowed to have your singers break into songs you didn’t write. Put in the fucking work, you lazy hump. You didn’t see Leonard Bernstein or Andrew Lloyd Webber phoning it in like that. Hell, the guys from South Park currently have a hit show on Broadway (and several movie musicals), so how tough can it really be?

Now, if you’ll excuse me, I’m going to drown out the memory of the Rock of Ages trailer with some actual rock music. Sorry Stacee Jaxx, your cover songs are simply no match for Lemmy. 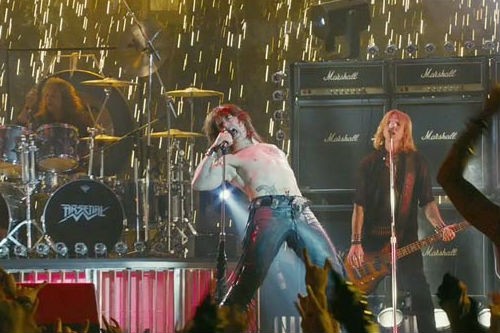