Over the next eight weeks, anyone who follows hockey or watches ESPN will be forced to endure one story after another about some wacky stunt perpetrated against the greatest trophy in sports by a Los Angeles King.

Each player and coach on the Stanley Cup winning team gets his day with the Stanley Cup, and that’s as it should be. Anyone who follows hockey knows that players started working toward winning the Cup from the time they first put on skates as very small children. Making the NHL requires a few gallons of blood, a weekly quota of stitches and an intimate relationship with an orthodontist. So a day or two with the Cup is the least the league can do for the members of the winning team, and players should have a good time with it.

But only up to a point.

More and more, players seem to treat the Cup like it’s a prop on a TV show called Can You Top This? The occasional crazy stunt performed by some mustachioed canuck used to be sort of quirky and fun, but now each player seems to try to outdo the others and come up with some bizarre activity involving the hallowed old trophy. The novelty of The Stanley Cup Stunt is gone. Now all the hijinks are just irritating, unoriginal and tacky.

Babies sit in it and then – surprise! – shit or piss in it. Players eat cereal out of it. Dogs have been fed a meal out of the Cup. One player had his baby baptized out of it. It has ended up on the bottom of Mario Lemieux’s and Patrick Roy’s swimming pools. If the Cup is so hard to win, maybe just a little more decorum might be in line once you have it in your hands.

I thought this might have something to do with the increased number of Americans in the NHL, because if there’s one thing Americans still do well, it’s excess. (For confirmation of this assertion, visit your closest Walmart this Saturday and try to estimate the total tonnage of the overflowing shopping carts filled with cheap shit that will never be used by the quarter-ton behemoths mindlessly playing garbage-grab.) But Canadian players seem to be just as bad if not worse. Crassness seems to be an international trait.

It’s not like I’m yet another moron who subscribes to the mindless “But We Must Respect the of [fill in the blank]” playbook. Normally, I don’t care two shits for the sanctity of anything. If I spill something in the kitchen and an old American flag is closer than the nearest roll of paper towels, well, Old Glory is sopping up some orange juice. I’ll covet and curse in church and not feel an ounce of guilt over my commandment breaking tendencies. I’d use a hotel Bible to cushion a banging headboard at the Super 8, and I’ve hung a baseball cap on a crucifix.

But the 118-year-old Stanley Cup, because of the monumental, lifetime struggle that goes with actually winning it, deserves a little more respect than having your baby’s smelly ass sitting in it. Carry it in a parade down the main street of your home town. Take it to the rink where you got your start in peewee hockey. Invite all your old coaches and teammates to the house for a party and pictures. If you’re from a small town, let every Tim Horton-eating hoser come by and get his picture taken with it.

Just stop treating it like a challenge to see how much TV coverage you can get with your stupid little college fraternity-like stunt. The next player who eats ice cream out of the Stanley Cup needs a good kick in the nuts …without a cup. 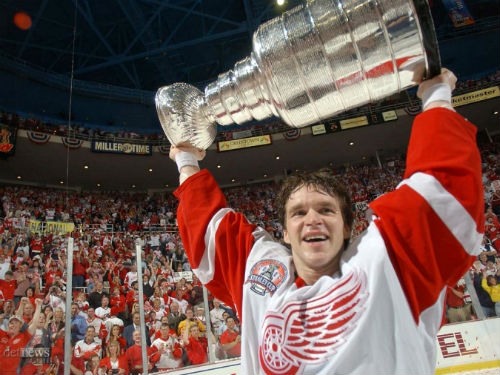