For years, John Kricfalusi fought the “factory system” in animation. From his time at Filmation Associates and DiC Entertainment to his work on the revolutionary Mighty Mouse remake and the creation of his own hit show Ren and Stimpy for Nickelodeon, John K has looked for a way to make beautiful and original cartoons for studios that want to churn out animation quickly and cheaply.

Thanks to the Internet, John K is now being given a chance to make cartoons the way he’s always wanted to make them. He has set up a fundraising drive on Kickstarter to raise money for “Cans Without Labels,” an animated short featuring George Liquor, Ren and Stimpy’s outspoken Republican owner. The Kickstarter campaign allows him to bring the cartoons he loves making directly to the fans, without all of those pesky middle men. With only days left to go in the campaign, we sat down to talk to John K about this exciting new territory for cartoons and the struggles with the factory system that led him to this project. 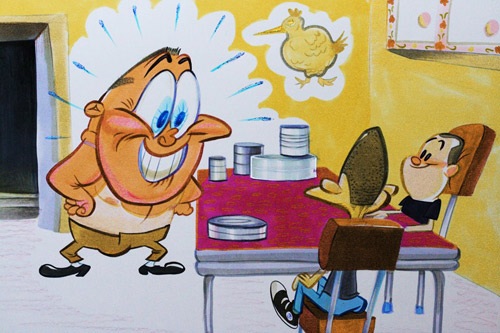