I normally rant about things that are overrated, but today I must give credit to some of the most underrated word constructions in the history of spoken language. I want to pay tribute to all of you wonderfully witty wags who scream messages to bikers as you pass them in your cars. You are truly this era’s Oscar Wilde’s, yet sadly, your genius humor evaporates mostly unheard in the rushing air of America’s highways.

I used to bike extensively in my late teens and early 20s when I’d spend my summers working in central Ohio. I would burn up the country roads of a little town outside of Columbus called Marysville. Even then, you Chris Rocks of the Cruisin’ Cars were whip smart hilarious with your passing screeches as I rode along the berm of the road, bothering no one and not in any way disrupting traffic. Still, you were magnanimous enough to share your keen insight about my biking presence on this earth, and I remain eternally grateful.

I got back into cycling about 15 years ago and ride more than ever despite the unstoppable assault of middle age, and – thank God – the phenomenon of amateur car comics continues today, with comedic mini-bits being hurled my way as I barrel down these beautiful county roads. Because after all, the last thing I want on a long bike ride is two to three hours of uninterrupted thought.

Instead, just like back in my younger days, I have the sidesplitting commentary of vocalizing tweeters to break up the monotony of being alone with my own mind, and I thank you profusely for squashing the overrated endorphin-induced rush of euphoria I am unfortunately experiencing as I ride along in my zen-like state beside a quiet cornfield under an azure blue sky.

There I am suffering through a few moments of ever-elusive peace and tranquility on this planet, and you come along to bring me back to the sweet, raucous reality of humanity by shouting out the most hilarious comments this side of “legitimate rape.”

Let me share with you some of the more hysterical humdingers I have heard on my rides. There was, “Adfhj alcvu slllaf bike cakjv dadl afdla!” I thought I was going to run right into a barbed wire fence, what with the guffawing that ensued in the ol’ saddle after that one!

One evening this summer, as I was waiting at a stop sign to cross a rather busy road, some fine fellow – it might have been Louie C.K., what with the acerbic wit he conveyed – let loose with a, “Akdfj kjafdsa the road aodut caour!” I made sure to commit that one to memory verbatim, as such a finely constructed joke would lose its oomph if I changed even one word.

And nothing reduces a biker to tears of laughter more than any screamed monologue at the center of which is the word “Fag!” Using that surefire nugget of comedy gold provides a much-needed shot of adrenaline to us bored bikers, who were up until then wasting our mental energy pondering the utterly perfect life moments afforded us by our silly little bike ride that day.

I could go on and on, but then you the reader would probably require medical assistance after overdosing on such world-class humor.

If you are uncertain as to whether you are one of these people who make bikers’ lives so worth living and are therefore the recipient of my gratitude, let me describe the standard screamer of any Bartlett’s for Bikers entry. You are – always – in the front passenger seat, which makes sense, as a driver could never muster such witty wordplay while also concentrating on the road. You are white. A wife-beater is the choice of shirt that seems to set the creative humor juices to optimal churning. Perhaps in homage to the grease that lubes our bike chains, your hair seems styled with a healthy handful of Quaker State 40-wt. oil. At least what I can see of said hair as it escapes from beneath your Skoal/NASCAR/Budweiser (pick one) hat On your arm is a tattoo that I’m sure was done with DaVinci-ish skill.

So thank you so much for turning countless rides into unforgettable mini-Improv shows. You should be commended for your originality, elocution and fine wit. Unfortunately, I never get to respond to you Highway Henny Youngmans despite my attempts to hail you as you speed down the highway in front of me. I usually try to call you back by waving one of my fingers on my upraised arm. But alas, you just keep driving.

I guess this is my chance to show my gratitude by throwing a bon mot of my own your way. I’ll try to write it the way you’d hear it if I ever foolishly tried to go toe to toe with you in the wisecrack department. I would like to say, “Avamau dappla gaugan you stupid fuck trumot grautina!” 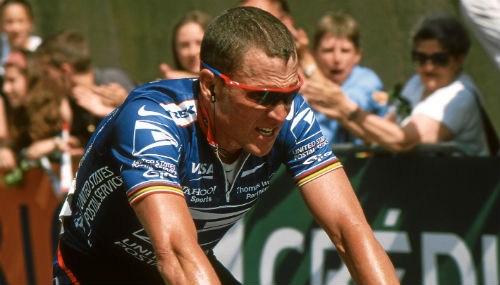