Can advertisers please go back to the days when they used beautiful people to try to sell me shit I don’t need? I am sick of watching commercials starring confident (faux) geeks, smart ass kids and fat fucks sitting in dirty clothes on dirty couches in dirty living rooms. Whatever the psychology is behind this tactic, it ain’t working on me. I’m not going to be moved to buy a new flatscreen by a guy who looks like couldn’t get laid in a women’s prison with a fistful of pardons.

When I was younger, it was all I could do not to take up smoking, so convincing were the cigarette ads with beautiful, healthy foursomes frolicking in the surf. I was sure that I’d be beautiful and have beautiful friends and vacation on spotless beaches if I just starting smoking Kools. Those were effective ads. Now it seems the only people trying to move products on TV are all the actors who were too toolish to make the casting cut for The Big Bang Theory.

I’ve never been swayed by the commercial geek appeal, especially because TV commercial geeks aren’t even genuine geeks. They are much too confident, too self-aware, too proud of their geekiness. These imitation geeks have embraced a contrived geek persona and made geekiness sort of hip. TV ad geeks own their geekiness, and that’s unbecoming.

Real geeks are nothing like this. They aren’t confident and ironic. They are suffering outcasts and clueless airheads. A real geek couldn’t sell an Eskimo a sweater, so why are advertisers using these fake, “cool” geeks to try to compel me to buy their soft drink?

It’s not just the overload of geeks in commercials that I find offputting. I’m tired of ads that star hapless adult males who can’t wipe their own asses if not for the weary know-it-all wife who saves the day with Brand X coffee or Brand Y frozen pizza.

Let’s see how this stupid-man/smart-woman ad type is supposed to work. I’m a guy. The idiot in the commercial is a guy. He’s a dipshitted manchild with the maturity of a third grader and the sense god gave a goose, and I’m supposed to relate to this kindred embodiment of male ineptitude and subconsciously desire whatever frozen lo-cal lasagna his wife – who of course possesses the wisdom of the ages (because she is a woman) – is serving up? I think I’ll pass on this clever man-bashing plea to win my fish stick loyalty. And let’s be honest, if you flipped these characters’ roles, every feminist group in America would fly into full boycott mode, as well they should.

Unhappily married couples in commercials make no sense either. If you’re happily married, you’re not going to relate to the comedy gold of two spouses who seemingly live together solely to impugn the other’s stupidity and worthlessness. If you aren’t happily married, why would a commercial reaffirming that sad fact make you want to run out and buy the very air freshener being touted by these two poor souls who apparently spend their days bickering? Eau de Raspberry obviously hasn’t brought marital bliss to these loveless losers, so it’s a safe bet that your own miserable marriage isn’t going to be salvaged by a freshly scented house.

Perhaps the advertising gimmick that most makes me want to hurl a shoe through my TV is the presence of the smartass, know-it-all child. Dear Madison Avenue: Asshole kids are never charming. Even cute, well-mannered kids are barely tolerable, so some little towheaded fucker mouthing off to adults and setting them straight about breakfast cereal is infuriating, and I’m not going to buy your microwaveable pizza wrap thingies because some wisecracking nine-year-old comes off as the smartest person at the breakfast table.

Ball trauma is another ad tactic that makes me flinch and wince, two reactions that I don’t think any CEO wants associated with his lite beer. I have balls, and those balls have taken their fair share of direct hits in this life. I can assure all the advertising departments in America that I have never once considered a baseball or dog paw to my nuts an event that elicited hilarity and resulted in happy memories. So when I see a commercial with some schmoe taking a rake to his testicles, my subconscious isn’t exactly storing lifelong feel-good images that I’ll positively associate with your brand of paper towel.

And finally, stop grossing me out in some bizarre attempt to instill brand loyalty in me. I used to love me some Doritos, but thanks to that nauseating commercial set in a gym, I’m a Kettle Chip guy. Now when I think of a nacho cheese Dorito, I picture a sweaty, bacterial-laden gym, two homely, smelly morons, a Dorito skewering a man’s neck and a sweaty gym denizen wearing a Doritos costume. Yum. Not only can’t I eat a Dorito anymore, I can barely tolerate the color orange thanks to that Clio contender.

Using the hapless, the unhip, the unexceptional, the homely and the repellant in ads doesn’t seem to work on someone like me. I, unfortunately, am all of the above, so when I turn on the TV, I want to see commercials with the beautiful, the successful, the winners of the cosmic lottery trying to convince me to eat a certain type of rice or use a certain brand of deodorant.

I don’t want to see pasty slackers vegging on a couch. I want to see beautiful people on my Sony Bravia in all their hi-def glory, mesmerizing me into deluding myself that if I switch to DirecTV or drink Bud Lite that I, too, will be handsome and successful, that I’ll find drive and ambition, that I’ll turn my life around and be just like the stunningly handsome or ravishingly beautiful spokesperson on the screen.

Instead, I’m hit with three minutes of the unsightly, the needy and the nerdy at every commercial break. And that makes me one Mad Man. 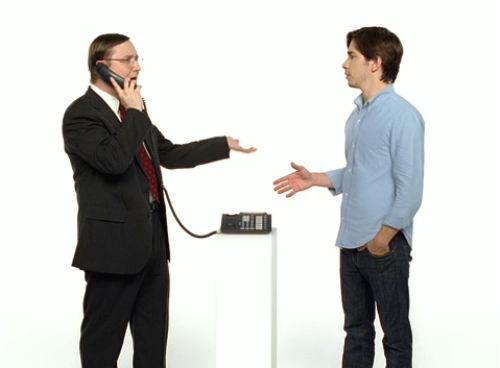