I’ve been watching more sports than usual lately, but me being me, I haven’t been able to enjoy the experience as much as I should. Instead of practicing sanity and just enjoying myself,
I have found a number of things that just piss me off while I’m watching sports. Please enter my world of irrational anger.

Wear ‘em or stow ‘em, but either way, take them off your goddamn head

I was watching a baseball playoff game that started at 1:00 in the afternoon in Cincinnati. The sky was one of those brilliantly blue skies you get only in October. There wasn’t a cloud between Cincinnati and Istanbul.

So naturally, some of the players in the field had their sunglasses on, which would make sense … if they had worn them to actually shade their eyes. But in every case, the sunglasses
were clamped to the forehead, resting atop the bills of their caps, essentially serving no purpose whatsoever. And so I ask these players: “Why, douchebags? If it is so bright that you need
sunglasses, wear them over your eyes, as the Oakley directions no doubt instruct you to. If you don’t want to do that, then leave them in the dugout. But why take them onto the field and then
make some screwball fashion statement by wearing them on your hat, often upside down? You look like an idiot. Please stop.”

Oh, and that shit around your neck isn’t helping

When you take off the sunglasses you’re not using, do us all a favor and get rid of that shit around your neck. Some of you knuckleheads have up to three good luck charms or energy rings or whatever the hell they’re called rolling around your veiny necks. Do you really believe these ersatz nooses will give you some kind of performance edge? You’re living in 2012 America, not 1884 Romania. Charms are for window-lickers, not the best baseball players on the planet.

Here’s a tip, Mr. .240 Hitter whose wondrous neckwear has you failing in 76 percent of your at-bats. Your innate skill and a lifetime of hard work is what got you to the Major Leagues. Some gawky do-hickey around your neck is not going to help you raise your batting average. You want better luck? Try a little more time in the batting cage, you superstitious goober.

And that goes for you, too, Mr. 12-15 Pitcher with the 4.96 E.R.A. Perhaps the reason you are two bad starts away from being back on the AAA buses is because that shit around your neck is causing you to tweak your delivery just enough to keep that un-breaking slider on a platter for batters who are free to wail away at the slop you’re dishing up because they are unencumbered by SHIT AROUND THEIR NECKS.

We get more substance from Charlie Brown’s teacher

We hear scintillating newsbreakers such as “We gotta get our bats goin’” and “We’re doin’ a nice job of catchin’ the ball” and “His changeup’s missin’ today but if he gets that goin’ we’ll be okay.” I’d rather zone out while listening to Tim McCarver tell another story about Ducky Medwick’s 1934 pregame ritual than have to ignore Bruce Bochy tell us that his non-scoring team needs to – alert the AP and ESPN! – score some runs.

Maybe these interviews would be more watchable if Dusty Baker would just once say, “Listen, Joe, we’re getting our balls handed to us today and there ain’t a chance in hell we’re gonna come back in this game, so I’m just gonna concentrate on the pair of tits on that blonde chick behind home. Jesus H. Christ on ice, you ever seen such funbags? Sumonabitch!”

Ever since 9/11, baseball has injected “God Bless America” into the seventh inning stretch in too many games. Now they do it during every post-season game, and what’s worse, they show
the nauseous display of faux patriotism on TV. I hate that awful song so much that I’d rather endure another commercial for The Big Bang Theory.

The Yankees are the asshats most responsible for this God + Baseball travesty, as it was part of their shameless pandering in the games following 9/11. They’d trot out some fireman or cop to sing the dreadful song and basically use the deaths of 3,000 people to whip their crowd into a teary-eyed frenzy.

Now, every time the seventh inning stretch comes along, we have to hear how God has singled out America for special care, which ironically enough comes about one inning after the home team recognizes a crew of crippled war vets who God apparently didn’t realize were Americans in need of his special attention when the roadside bomb detonated.

It sucks. The seventh inning stretch is for “Take Me Out to the Ballgame” and then some hackneyed party song that gets the crowd all jazzed up and dancing. Leave Jesus out of baseball … unless it’s Jesus Rodriguez from the Dominican Republic who can hit a fastball 450 feet.

“Look, Ma! I support Breast Cancer Awareness! Even my bitch and baby mamas got breasteses.”

While the pink thing does work when it comes to putting breast cancer more into the public’s awareness, I find it hilariously ironic that so many NFL players are basically trying to out-pink their peers. Not only does it look like nothing more than an exercise in competitive fashion-statement-making, but is there another sport that has a greater number of its players arrested for abusing women?

It’s nice of you to wear pink shoes and wristbands and tape, Mr. Superstar Linebacker, but you’d be doing a lot more for women if you’d keep the back of your meathook pimp-hands off of her cheekbone the next time she has the temerity to talk back to you.

Really, ESPN? Mystique? Give me a $210 million payroll and watch how much baseball mystique I can buy. I’ll mystique my way to October baseball every year. And not damn dime of it will be spent on unused sunglasses or shit around the players’ necks. 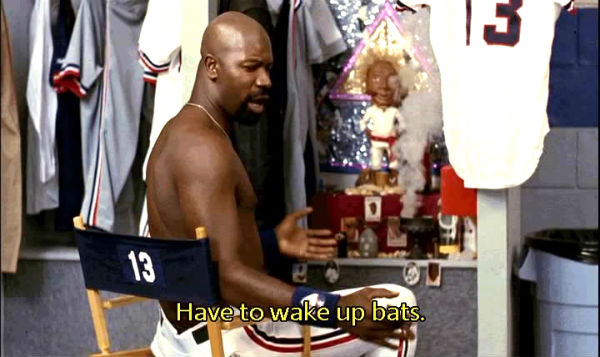