Andy Griffith died this past summer and his widow was recently awarded a permit to raze the North Carolina home he lived in for many years. Sounds like a non-story, right? Famous, but pretty crappy old actor dies and, lo and behold, the world moves on. Being dead and all, he doesn’t need the house anymore, and someone wants it torn down. Commence to bulldozing.

Only now some longtime friends of Griffith are making noise about how this house is a landmark deserving of some sort of museum status. They claim even Griffith himself had dreams of turning the house into a museum.
They want the house preserved.

Preserve Andy Griffith’s house? Why? So that the six Americans who have the time, money and 60-something IQs to consider visiting such a museum will have somewhere to stop between their breakfast at Cracker Barrel and their lunch at Cracker Barrel?

Too many groups do too much whining about preserving old buildings, especially the birthplaces of famous people. The only homes worth preserving are those of presidents, Martin Luther King, Jr. and perhaps a few abolitionists like Harriet Tubman and Frederick Douglass. Otherwise, either sell it to someone to live in or tear the thing down if it’s no inhabitable anymore.

What bothers me so much in this particular instance is that the goofballs who want to save the house aren’t really thinking of Andy Griffith. They’re thinking of Mayberry’s lovable gun-totin’ rube, Andy Taylor.

Note to preservationists: The house wasn’t lived in by the TV character that, for some unknown reason, means so much to you. You see, Sheriff Andy Taylor didn’t really exist. It was just an actor reading lines written by other people. Andy Griffith, the real man who lived in the house you can’t bear to see torn down, showed up on set, read his lines, hit his marks and then went home.

You know next to nothing about this man, yet you want to turn his home into a museum, the home where he could mercifully get away from all the goofy nostalgia nuts who just can’t seem to differentiate between a TV character and the actor who portrayed him.

I’m sure wouldn’t be overly thrilled to have people pay money to poke around the rooms where he masturbated, had sex and defecated. That’s basically what you’d be doing if you visited his house. It’s creepy and sad.

I loved All in the Family when I was younger. It was a watershed TV show that was so ahead of its time that its time still hasn’t arrived, for that show could never be on the air today. Carroll O’Connor’s Archie Bunker is one of the most important TV creations of 20th century entertainment.

But if the Carroll O’Connor home-museum were two doors down from mine, admission were free and the house were filled with 282 pieces of All in the Family memorabilia, I still wouldn’t demean myself by taking the tour. I’d be traipsing through the home of a man I didn’t know, not Archie Bunker’s house.

A similarly sad and bizarre scene played out in my hometown of Pittsburgh in the past few years. The city built a new state-of-the-art arena, and almost immediately a bunch of backward looking humps with hard-ons for the past fought against tearing down the old arena.

Here was their apparent logic. The old arena was no longer suitable for hockey or concerts, but these people still wanted to tie up prime downtown acreage so that they could look at a building and remember their overrated and over-glamorized pasts.

It’s the same thing with Andy Griffith’s house and the houses of almost all dead famous people. Remember their deeds, their art, their contributions, but forget about their houses. Wanting to walk around inside a famous person’s home after they’ve died is perverse. 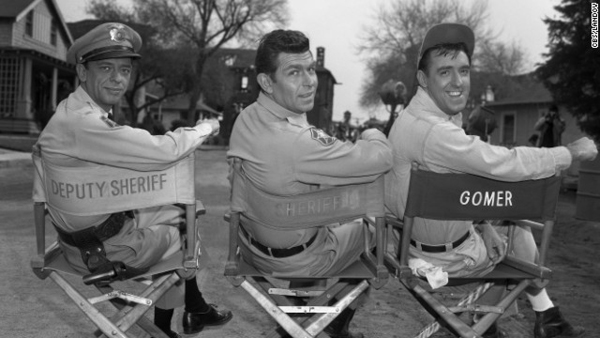