Enough good things can’t be said about Marvel’s brilliant approach to The Avengers. The reason the film worked so well was because of the care put into the build up to it. From the Nick Fury teaser at the end of the credits of the first Iron Man film, you felt like you were in good hands with this series. And you couldn’t wait to see what came next.

What they have done with the Iron Man, Thor, Captain America and Incredible Hulk franchises is build a world populated with superheroes – just like the comics always had. All of these heroes have their own stories with their own villains, but then they get to team up to take out global threats. Through good writing and careful planning, Marvel and Disney have created a cohesive universe full of colorful characters.

But, in doing so, they’ve left me with one bizarre lingering question: Why the hell are there so many Stan Lee clones in this universe?

Now, perhaps you might argue that there is only one Stan Lee in the Marvel cinematic universe and he simply gets around a lot. But am I really supposed to believe that the guy working as a mailman and getting caught in bank robberies in New York City is also attending red carpet events in California (where he’s mistaken for Larry King and Hugh Hefner by Tony Stark) and attempting to move Thor’s hammer with his pickup truck in New Mexico and maintaining a house full of gamma radiation-infected sodas in Milwaukee? The man is 90-years-old, for crying out loud. There’s just no way he’s getting around that much and seeing that much action.

Clearly, these have got to be clones.

And I think it’s fair to take this one step further and assume that the Stan Lee clones are somehow related to the three Bruce Campbell clones that keep crossing paths with Peter Parker in New York City (the wrestling announcer, the stubborn usher and the snooty waiter). It’s just too odd of a coincidence not to somehow be connected.

But who is creating these clones? And for what purpose?

During the credits for The Avengers, we get our first glimpse of the man pulling Loki’s strings – the “Mad Titan” Thanos. Clearly he is plotting something big that will undoubtedly unfold in The Avengers 2. And I’m guessing that plan has something to do with his unstoppable army of Stan Lee and Bruce Campbell doppelgangers.

Now, as passionate Marvel fans already know, Thanos has conducted comprehensive research on genetics. He meticulously studied numerous heroes and villains, unlocking their genetic code and then splicing his own DNA into theirs. Originally, five clones survived these experiments – evil versions of Professor X, Iron Man, Gladiator, Doctor Strange and Galactus. There are also clones of Thanos himself that cropped up over time. Eventually though, the original Thanos – with the help of Spider-man and a handful of other heroes – destroyed all of these clones and abandoned the whole endeavor.

Or did he? Maybe his cloning efforts have finally entered phase two. And this time around, he’s focusing on two very important people in this world – Stan Lee and Bruce Campbell. Perhaps Thanos headed back into the space lab to fire off countless copies of Lee and Campbell – copies that were infused with his own DNA. And he gave them menial jobs as mailmen, ushers and waiters so that they would live their lives in anonymity while still being close to the action. And they have quietly lived out those lives until the moment Thanos is ready to use them.

Use them for what? To create a zombie army, of course.

Stan Lee is the man who created all of these superheroes. In Fantastic Four: Rise of the Silver Surfer, that clone identifies himself as “Stan Lee” when attempting to enter Reed Richards’ and Susan Storm’s wedding. So if Stan Lee exists in the world populated with characters he created, that makes him the god of that world. That also gives him dominion over life and death in that world.

Clearly Thanos is going to have Stan Lee raise up a zombie army to attack the populace. And The Avengers will be powerless to stop this Army of Darkness. In fact, there is only one man on the planet who will be capable of taking them down … or, well, one race of clones. And when the collection of Bruce Campbell doppelgangers thwart this zombie army, they will be hailed as saviors while the superheroes who failed will be ostracized. That’s when Thanos swoops in and reveals that he is the leader of the Bruce Campbell army and he is ultimately the one responsible for saving the day.

In their gratitude, the people of Earth entrust Thanos with protecting them from any future threats. And his first act of power will be to outlaw the vigilante superheroes who failed to save the day. And with them out of the way, there will be no one to stop Thanos from complete world domination.

That’s why Stan Lee and Bruce Campbell must be stopped … before it’s too late. 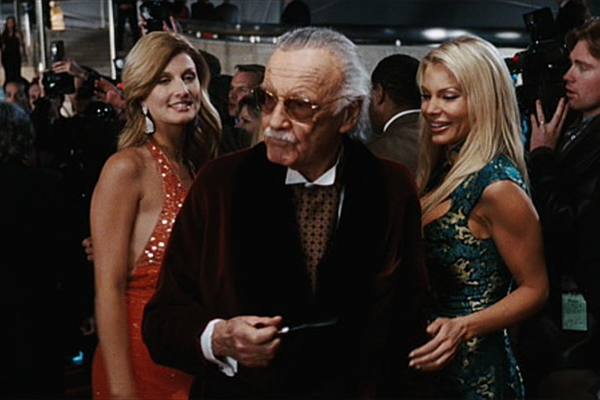