To Netflix chief content office Ted Sarandos, I am akin to a unicorn or a yeti. Or, for all of the Melville fans out there, I’m Sarandos’ white whale.

I say this because I am someone who discovered Firefly well after the show was canceled. I discovered the show unceremoniously in 2006 when I saw my roommate’s copy of Serenity sitting around the house. I had absolutely no idea what it was. So I asked my roommate about it and since I had absolutely nothing better to do that day, I popped it in and watched it. And I instantly fell in love with the story and the characters, which caused me to go back and watch Firefly as well.

To Sarandos, this apparently makes me an anomaly.

With the online streaming site’s highly-publicized campaign to bring back Arrested Development, Sarandos was asked if Netflix might consider resurrecting other works with passionate Internet fanbases like Firefly or Jericho or Freaks and Geeks.

He responded with the following:

“Let me give you one broad statement about these recovery shows. In almost every case the cult around the show gets more intense and smaller as time goes by. Arrested Development was the rarest of birds in that the audience of the show grew larger than the original broadcast audience because people came to discover it years after it was cancelled. The Firefly fan is still the Firefly fan from when it was on TV and there’s fewer of them and they’re more passionate every year. Whereas with Arrested Development we’re going to be serving a multiple of the original audience. Any of the other shows we could bring back would be a fraction of the original audience.”

This is just such an asinine statement. It makes it sound like Arrested Development is the Citizen Kane of its era – somehow ignored in its time and forced to wait for future generations to slowly discover it and appreciate it for the genius work that it is. But the sad truth is that Fox has a long and storied history of bungling shows that later end up getting a second life when fans discover them after they have already been canceled. One of Fox’s biggest cash cows these days – The Family Guy – was canceled and then brought back after exceptionally strong DVD sales. The same thing happened with Futurama, which was picked up by Comedy Central after impressive sales and a series of successful direct-to-DVD films.

So it’s hard to say that Arrested Development was “the rarest of birds.” It ran for three full seasons on Fox, unlike many of these other shows, which were unceremoniously canceled before their time. It was critically-acclaimed. It won six Emmys. And it certainly wasn’t like Fox failed to promote it – I remember ads for the show constantly running on the network when it was on. It was a pretty high profile show. Fox did everything right with Arrested Development, it just never garnered huge ratings. (The first season averaged 6.2 million viewers, which was considered a disappointment at the time, but these days would make it the most watched show on NBC.)

Firefly, on the other hand, seemed like a show Fox actively tried to keep people from watching. The show aired on Friday nights, which is basically a black hole for television ratings to begin with. On top of that, they would air the episodes out of order, including using “The Train Job” as the debut episode, instead of “Serenity,” the two-part pilot that actually introduced the audience to the characters and the dense world they lived in. Add to that the fact that the show was occasionally preempted for sports and it’s not hard to see why the show didn’t garner huge ratings. (Though the show did average around 4.7 million viewers, which again would make it one of NBC’s more successful shows these days.)

Serenity, the theatrical film that served as a follow up to the show, only made $25 million at the box office, which was only a fraction of its $39 million budget. It is considered a flop, though it did eventually make its money back in DVD sales.

Ted Sarandos would have you believing that the Firefly well is drying up. According to him, only some dwindling fraction of the original 4.7 million viewers remain. But as someone who discovered the show well after it was on the air – and someone who has gotten my brother and several other people into the show since then – I know that’s not true. Around 10,000 people showed up for last year’s 10th anniversary panel at Comic-Con. The Science Channel is still running reruns of the show. People continue to talk about it passionately and to buy Firefly merchandise.

Joss Whedon’s last project was a little film you may have heard of called The Avengers. It grossed $1.51 billion worldwide, making it the third highest-earning film of all time. While a lot of that credit goes to interest in the Marvel characters themselves and the brilliant build up Disney did with the previous films in the series, the lion’s share of The Avengers 93-percent approval rating on Rotten Tomatoes goes to Whedon. The man knows how to make films that people want to see. (Serenity has an 82-percent approval rating.) So with the right promotional tools behind him, I absolutely believe that an enterprising company could resurrect Firefly and make it a huge success.

Though I realize that is unlikely to happen. And frankly, I’m okay with that. Serenity has become one of my favorite films of all-time. I’ve rewatched it more than most of the films sitting on my shelf. And Firefly has been in heavy rotation in my Blu-ray player, as well. I’m grateful we got to see as much of these characters as we did. The old episodes will always be out there – because you can’t stop the signal. Sure, I want more episodes, but frankly I don’t need them.

Still, that doesn’t mean I want to stand by while some goram ass clown like Ted Sarandos talks dismissively about one of my favorite shows.

The Internet should be the new frontier for television and movies. I expect networks like Fox to miss the point and to mishandle great properties. But my hope was that Netflix and Kickstarter and other online sites would step in and get it right. Unfortunately, Sarandos has just shown us that Netlix is more like the networks than I wanted to believe. 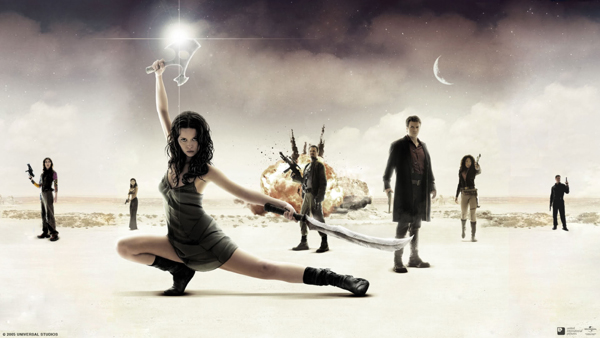