Dear guy who sent his wife a spreadsheet of every time she turned him down for sex and wife who posted the spreadsheet on Reddit,

When they are going well, they are a magical thing. To find that one person on the planet who gets you and accepts you for who you are, which in turn makes you the best version of yourself, is absolutely beautiful. It makes all of the bad OKCupid dates and lonely bar crawls feel worth it.

However, relationships are hard work. And even if you find “The One” (meaning your perfect match, not Neo from The Matrix, just so we are clear), you still have to work to keep the relationship going. There will be ebbs and flows to your happiness (and yes, to the sexual component of your relationship). You have to find a way to weather them.

I’ve been in a relationship where we stopped having sex. I have a lot of friends who have gone through it too. It’s really difficult. It’s hard to accept that the one person you want to be with (and, on a more pragmatic level, the one person you are allowed to have sex with) doesn’t want to sleep with you. It’s hard not to take that as a rejection of you as a person.

Plus, the longer you go without the intimacy, the more it is built up and the harder it becomes to rekindle it. You get frustrated and hurt and trying to initiate anything feels awkward because you are afraid of being turned down. It’s like the yips in baseball. It all spirals out of control. You forget the fundamentals of how to make it happen. What once came to you so naturally now suddenly takes a great deal of effort and you get in your own head, psyching yourself out.

There are no easy answers on how to fix the problem when you get to that point. Most likely, you need to try couple’s counseling or some other means of getting outside help to develop the tools needed to escape the rocky terrain your relationship finds itself in. It takes patience and effort to navigate your way back. You need a certain amount of tact and understanding of your partner’s situation in order to get both of you on the same page.

In short, what I’m saying is – don’t make a spreadsheet of every time your partner turns you down for sex. I know, in your depressed haze, you might have convinced yourself that studying the statistical data may gain you some insight into the root of the problem, but what did you really gain by discovering that you only had sex three times in the last seven weeks, out of 27 attempts? Sure, it tells you that if this was baseball, you’d be batting about a .111, which is the anemic hitting average Cardinals hitter Lance Berkman had in his first three games back from a serious knee injury in 2012. (Injuries would continue to plague Berkman that season and he’d end up on the physically unable to perform list while his team made it into the post season. After coming back the following year to play for the Rangers, he’s now retired, so the end of his career is definitely not something you want to metaphorically compare your sex life to.)

And even if you do create a spreadsheet (which again, YOU SHOULDN’T DO), under no circumstances should you passively aggressively mail that spreadsheet to your wife (who, until that point, had no idea you were making said spreadsheet) as she’s heading out of town for a business trip, adding that you won’t miss her. That’s not pouring gasoline on the fire; it’s shooting the fire with a rocket launcher.

But I’m not just talking to the guy in the relationship here. I’d also like to take a moment to talk to his wife. Because I can’t condone your actions either.

Sure, your husband hurt you in a truly bizarre and nerdy way. What he did was wrong and frankly kind of gross. But what you did was bad as well. You posted the spreadsheet on Reddit, airing your dirty laundry in order to publicly shame the man you love. What he did was wrong, but he was at least nice enough to keep it private. You went on a public smear campaign.

You both are at a very dangerous precipice in your relationship. What happens next will determine if your marriage will survive. So tread carefully and remember that even though these are dark times, you both love each other and made a commitment to one another. You’re in a tough spot, but you can both find a way out of it with love, patience and understanding.

It doesn’t have to end for you like it did for Lance Berkman. You don’t have to sit on the sidelines while your teammates score. You’ve both got a lot of home runs left in you. So stop treating your sex life like Moneyball. Get out of your own heads and just swing for the fences. 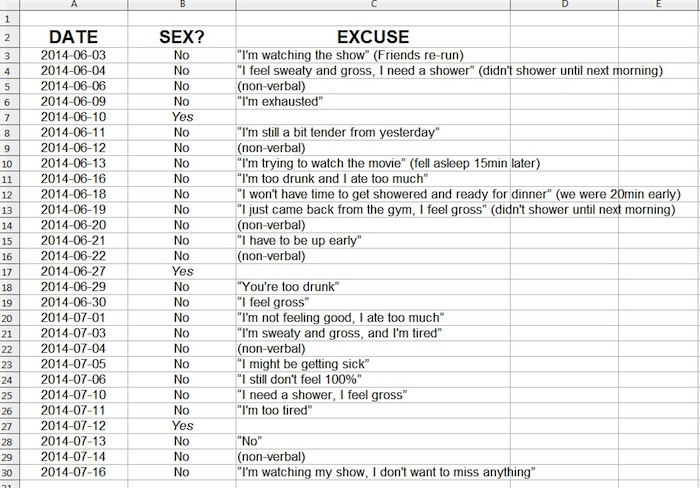