Yesterday, we finally got an answer to one of the biggest questions of 2007: did Tony Soprano die at the end of the series?

Well, we sort of got an answer. Within a few hours of the initial story coming out, there was backpedaling from David Chase’s camp, saying his comments were taken out of context. By the end of the day, we were back to square one.

In case you missed it, Martha P. Nochimson published a story on Vox claiming to have the definitive answer to whether or not Tony died in that finale scene.

In the article, Nochimson explains:

I had been talking with Chase for a few years when I finally asked him whether Tony was dead. We were in a tiny coffee shop, when, in the middle of a low-key chat about a writing problem I was having, I popped the question. Chase startled me by turning toward me and saying with sudden, explosive anger, “Why are we talking about this?” I answered, “I’m just curious.” And then, for whatever reason, he told me.

The article is long and delves into Chase’s approach to storytelling, but it does eventually get to the answer to the big question. According to Nochimson: “He shook his head ‘no.’ And he said simply, ‘No he isn’t.’ That was all.”

Within hours of the article being published, Chase’s publicist released a statement refuting Nochimson’s definitive answer. The statement read:

A journalist for Vox misconstrued what David Chase said in their interview. To simply quote David as saying, “Tony Soprano is not dead,” is inaccurate. There is a much larger context for that statement and as such, it is not true.

As David Chase has said numerous times on the record, “Whether Tony Soprano is alive or dead is not the point.” To continue to search for this answer is fruitless. The final scene of The Sopranos raises a spiritual question that has no right or wrong answer.

In 2007, like most of you, I was totally wrapped up in the ending. I ended up writing an in-depth column explaining why I was firmly in the “Tony died” camp. In the article, I included two other HoboTrashcan writers’ theories. All of us had reached different conclusions on what it all meant.

Back then, I would have loved for Chase to come out and settle things. But he had no interest in doing that. I even reached out to Sopranos writer Terence Winter back then, who I had recently interviewed, to see if he could shed any light on the subject. And his response was: “I’m sorry, but David Chase specifically requested that we not discuss the finale, preferring to let the work speak for itself. Sorry I couldn’t be more help.”

But now, seven years later, as Nochimson attempts to put the matter to bed, I’ve realized a few things.

First of all, I’ve realized that this isn’t a question to be solved. It’s Schrödinger’s ending. Tony is both alive and dead. We’ll never know which is true because Chase doesn’t want us to know.

Now, you can choose to look at this as a rather profound and beautiful gift to the audience – leaving it up to them to decide the complicated protagonist’s fate. It’s up to the audience to decide whether Tony should be punished or get a free pass. We become the judge, jury and executioner.

Or, you can look at it as a giant fucking cop out. Chase couldn’t commit to an ending so he left it up to you to do it for him.

I tend to land in the latter camp, though your mileage may vary.

Ultimately though, it doesn’t really matter to me where you land. And that’s because of the second realization I’ve had: I really don’t care about the answer to this question anymore. Did Tony live or die? Who gives a fuck?

The Sopranos ushered in a Golden Age of television. It completely changed the game. Shows like Breaking Bad, Sons of Anarchy and Dexter wouldn’t exist if The Sopranos didn’t lead the way. But while nothing can ever diminish what the show meant to television, the fact is, we’ve now evolved passed it.

The Sopranos was the first. But things have only gotten better since it went off the air. Breaking Bad perfected in art form and it gave us one of the best finales in the history of television.

How The Sopranos ended is irrelevant. It’s end was the beginning of something beautiful. If the Soprano family eating onion rings and listening to Journey gave us Walter White’s perfect sendoff, then it was all worth it. 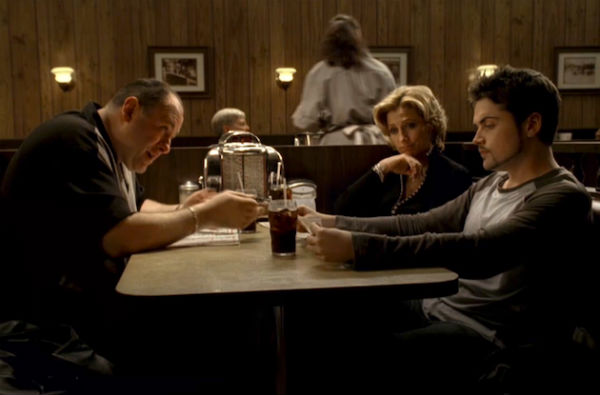