Like he had every day since the Avengers moved into Stark Tower, Hawkeye sat alone in the break room eating his lunch.

He’d occasionally glance over at the other table, the one where Iron Man, Captain America and Thor sat joking around with one another. Sure, he could sit with them, but then the jokes would be directed at him. He was tired of hearing their sarcastic jabs about how they “couldn’t have saved New York without him and those handful of guys he took out with arrows.” That inevitably lead to follow up jabs about how at least he wasn’t “brainwashed and trying to kill us during that final battle.”

Hawkeye wanted to believe that that was the source of the insults. If it was just about them not quite trusting him after he was brainwashed by Loki, he could understand. But it was deeper than that. They didn’t respect him. He wasn’t considered a “real” part of the team.

Worst of all, they all had their own side adventures that he was never included in. For weeks, he overheard Thor boasting about his battle with Malekith – which had mostly taken place on Asgard, but still, it would have been nice to get a call while it was all going down. He sat alone in Stark Tower watching on television as Captain America saved DC from a Hydra takeover of S.H.I.E.L.D. (Black Widow, who had been his one close friend before all of this, was invited to be a part of that adventure.) And he was mopping the floors as he watched the coverage of Iron Man saving the President and taking down the Mandarin with an army of Iron Man robots. (Even Pepper had gotten in on the action during that one, but no one called Hawkeye.)

Hawkeye used to have his own adventures. He had single-handedly taken down Bobcat and the Claws. He captured all of the feared Dark Ocean Society with a single arrow. And his battles with the Secret Empire had been legendary. But all of that was before he became an Avenger. And no one wanted to hear those old stories. He had tried to launch into one once, only to have Iron Man cut him off to tell the story of him sacrificing himself to save New York for the thousandth time. (“We were all there!” Hawkeye thought to himself, though he of course said nothing.)

He began to miss his days spent doing the traveling carnival circuit. Sure, the money was terrible, the whole place smelled like a hamster cage and it too was a lonely existence spent wandering from town to town, but at least he was respected. He missed the days where he was billed as “The World’s Greatest Marksman.” The days when kids lined up to take a photo with him. Now, on the street, kids would just ask, “Where’s Iron Man?”

Hawkeye sat alone in his room, writing in his journal. He left the television on in the background, in case he teared up again. (He could only imagine how much worse the ribbing would be if the guys heard him crying.) He was halfway through an entry about how building a robot suit that fought your battles for you was way easier than hitting a target soaring overhead on a futuristic glider while falling down when something on the TV caught his attention.

It was a man in a green hood firing arrows at bad guys. His technique was a little suspect, but Hawkeye found himself enthralled nonetheless. This man, this Oliver Queen, was an archer like him. But unlike Hawkeye, he was beloved. He had wealth, women and a kick ass costume. He was everything Hawkeye dreamed of being. The show was even called Arrow; the archery was the focus! Hawkeye immediately set up his DVR to record every episode and he began googling everything he could on the Green Arrow.

He thought about telling the rest of the guys about the show, using it to try to gain some respect. But then he remembered the night he tried to get everyone to watch Robin Hood: Prince of Thieves and weeks of torment that followed.

So instead he began eating his lunch in his room, watching old episodes of Arrow on Netflix. Whenever the jokes got too cruel or the loneliness overtook him, he’d think of Oliver Queen overcoming being shipwrecked on an island to become the hero of Starling City and convince himself that things would get better soon.

Right now, he was alone on his island of sadness, but someday, somehow, like Green Arrow, he’d escape. 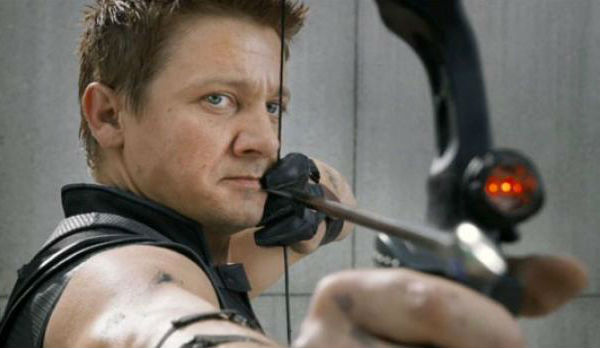