This past Sunday, I honored my mother by bringing a metric ton of laundry to her house, eating her food, and watching a war movie with her. The film we watched was Last Days in Vietnam, a documentary about the helicopter evacuation of remaining American troops and South Vietnamese allies in 1975. The documentary includes an impressive amount of archival footage from the day, some previously unreleased. About an hour and sixteen minutes in, my mother motioned for me to be quiet, as the camera panned across thousands of people crammed on a small navy ship. “There!” she said, pointing as a man appeared on screen, wearing aviator sunglasses and a familiar, dour countenance. “Maybe that’s your father.”

The film tracks the chaos and confusion in those final days, including interviews of both American military and South Vietnamese*. American troops had officially withdrawn from the Vietnam War in 1973 with the signing of the Paris Peace Accords. A military presence remained to help maintain some fractured semblance of “peace” between North and South Vietnam, in the hopes that it would stabilize into a situation analogous to North and South Korea.

As everyone now knows, these hopes proved to be illusory and short-lived. That very night the peace accords were signed, my uncle celebrated with his fellow soldiers, laughing and light-hearted for the first time in years, when a spotter ran in and broke up the festivities. An alarming number of North Vietnamese tanks had been sighted, fast approaching the border. In the middle of the night, the company relocated to the hills outside the city of Chau Doc, just outside the Cambodian border. My uncle died in combat there the following morning.

Fighting continued at an inexorable pace. The North Vietnamese army gradually expanded ownership of territory, slowly staining the map red like blood seeping through cloth. The impeachment of Nixon in 1974 escalated matters by emboldening the NVA to march onto Saigon itself. The capital city of a doomed country. Where my mother huddled fearfully with her sisters-in-law, waiting for history to happen to them.

Evacuation plans were improvised from moment to moment, resulting in what can charitably be described as a massive clusterfuck. The film focuses on the decisions of Graham Martin, the last US ambassador to South Vietnam. Despite increasingly dire reports about the progress of the NVA, Martin deferred making final evacuation plans for remaining US personnel and South Vietnamese allies considered most at-risk for retaliation. Apparently he’d been clinging to the hope that he could broker a diplomatic resolution that might dissuade the NVA, hellbent on unification, from capturing Saigon. Considering that a sizeable number of South Vietnamese personnel ended up left behind at the embassy because there wasn’t enough time to complete the evacuation, it is difficult not to be incredibly angry at such short-sightedness and delusion. Especially knowing the fate that befell many of those left behind.

Yet the film does a good job of showing why Martin would act (or fail to) in this way, even as it shows perspectives from those who suffered the greatest consequences. Martin’s motivations, as depicted by the filmmakers, seemed driven less by bluster than by deeply entrenched investment. His only son had perished while fighting for this cause; disengagement would render that sacrifice for naught. He, like my own father and mother, had refused to believe it was over – until it was.

The final straw fell when the airport, considered the primary site for evacuation logistics, came under heavy artillery fire from the North Vietnamese. My aunt had been working at the airport that day; she too had been sanguine about the need to make escape plans. She ran home in tears. At this point, Ambassador Martin was forced to acknowledge that the situation had degenerated well past the point of diplomatic solutions; he reluctantly issued orders to commence evacuation by helicopter from the US embassy. (Even so, not without a fight – Martin actually drove to the airport to see with his own eyes that the damage was irreparable).

Here, however, Martin did something that elevated him to hero status in the eyes of my mother and other emigrants: he dragged out this last evacuation as long as possible, knowing that as soon as all the Americans were out, the evacuation would end and no more South Vietnamese could escape on helicopters. On each helicopter that came to the embassy, he instructed that no more than one or two Americans board, accompanied by as many Vietnamese as could fit. There were 75 helicopters, each able to carry a maximum of 40 passengers. Congress refused to authorize additional funding for evacuation due to war weariness. Slowly, the helicopters picked up groups of people from the embassy and a few other positions, dropped them off on boats, and returned for more shifts. Martin, along with a great number of other military officers and personnel, stayed behind to ensure the evacuation of South Vietnamese until they themselves were forced onto the helicopters, via presidential order.

The day Saigon fell is known in Vietnamese-American communities as “Black April”. For a historical event that had so much impact on my family, I must confess I have known very little about it or how things transpired, both on a political and a personal level. I have honestly never fully appreciated how cataclysmic this day had been for my family. For my mother, newlywed and three months pregnant, and absolutely terrified. For my father, who had witnessed his country just end, via radio announcement. He hadn’t worked in the embassy, nor did he have any close American friends. But because he had been a lieutenant in the now non-existent army, and had been posted in an office, under this new regime he would most definitely have been suspected of being a CIA collaborator. All South Vietnamese military and those who had worked with Americans, even as cooks or cleaning staff, were commanded to report to re-education camp. As many as 250,000 prisoners starved or worked to death. 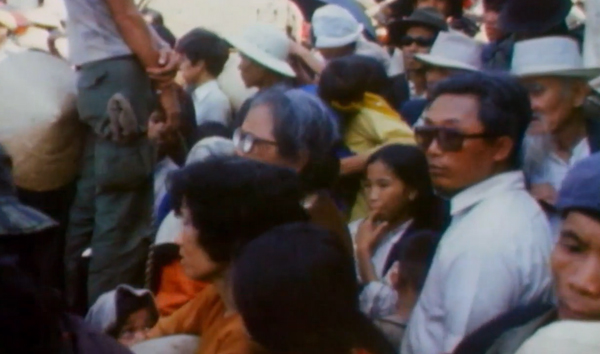 My mom talks about it often, as if it were yesterday – kind of like that shell-shocked ‘Nam veteran trope in American culture, but from a different perspective, obviously. According to her, she and her sisters-in-law had been preparing lunch when they heard the radio announcement. Wordlessly, everyone walked outside to gawk at the changed world.

What does it look like when a country disappears? Watching the archival footage, my mom nodded in recognition at the images of discarded boots littering the pavement. South Vietnamese troops had quickly stripped out of their military uniforms, now nothing but liabilities, and walked naked along the streets that were no longer theirs. Soviet tanks patrolled the corners. My father thought it not prudent to travel all together in a big pack that might attract attention; he took one of my cousins along with him to go check out the situation, and told my mother to stick with my aunt and other cousin. They would meet up at the shore.

My mother says she was anxious to get going. But my aunt moved lethargically, ostensibly preoccupied with looking for my cousin’s shoe, but really reluctant to leave without knowing the whereabouts of her husband. Finally they set out, and my mother says they had probably taken the wrong fork in the road – my father and cousin maybe took the left path, while the women veered right**. They couldn’t find my father or the shoreline with the navy boats. Armed NVA soldiers had begun to mill about the streets and my aunt panicked at the sight of them, so they returned to the house. My mother waited to see if my father would resurface; when he didn’t by the next morning, she then deduced that he had moved on to another town further south, or fled the country altogether.

“When did you find out for sure that he had escaped to America?”

(Did I mention that my mother was three months pregnant with my sister at the time?)

My father is not extremely talkative about those days, at least not to me. He has randomly brought it up in conversation, briefly describing what it was like to be in Saigon at that time. The day before Black April, he had driven around the city on his Honda scooter, scoping out the helicopter evacuation pickup sites, but they were all too overcrowded. By doing this, he spent all his remaining fuel – no more would be available anywhere near the city. After the radio announcement, knowing that danger was imminent for him, he took my cousin and ran five miles to the shore. There, they managed to literally jump onto one of the last U.S. navy ships as it departed Saigon Harbor.

I sent him the screenshot and waited for his response. Eventually he replied – he insists the man in the sunglasses isn’t him. (I admit I was a little disappointed; my mom had convinced herself it was him and is still skeptical).

I have asked her if she ever felt angry or bitter at my father for abandoning her and my sister. No, she didn’t, she says, since pretty much everybody else she knew was in more or less the same situation. Just incredibly sad and lonely. Desperate to escape and be reunited with my father, my mother made several failed escape attempts over the years. At one point, she had actually contemplated walking on foot across Cambodia of all places, where Pol Pot was busy murdering people and throwing them into ditches, especially strays from Vietnam. I am forever grateful she did not elect to waltz into the Killing Fields. Eventually my father earned his citizenship and sponsor my mother and sister to come to the US by much safer means.

Last Days in Vietnam is absolutely riveting, and I imagine it would be so even for people without a personal connection to the events that had transpired. I would encourage any readers to drop whatever nonsense you are currently engaged in and go watch this. Hence, I will not spoil the most incredibly mind-boggling evacuation story of all, unbelievable in the amount of courage and sheer luck involved (though it is an actual historical event, and as such you may spoil it for yourself here, if you so choose).

* No North Vietnamese perspectives were included, which some have criticized. For my part, I don’t think critics understand how much animosity many South Vietnamese refugees still harbor towards the regime, even in its current incarnation. I am guessing it would have been very difficult to get some of the South Vietnamese interviewees on board if otherwise. Plus, the documentary specifically explores the evacuation and its aftermath; since North Vietnamese weren’t really involved in evacuating, I think including their perspectives could have muddied the focus of the documentary considerably.

** My mother has never been that great with directions. To illustrate the point for local readers: she made a wrong turn coming out of the Towson Home Depot once, and somehow drove all the way to Bel Air before noticing this error. 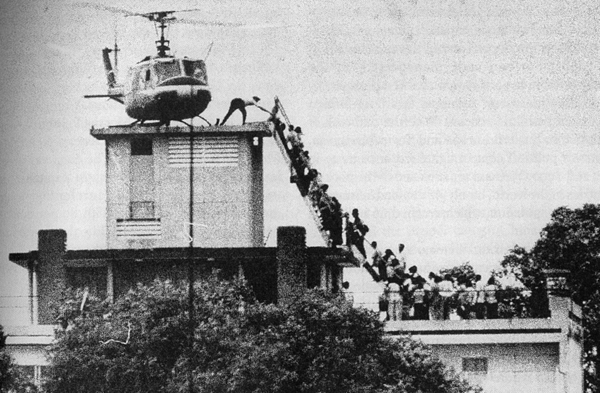 Kim Le is a writer and shiftless gadabout who hails from the distant wheat fields of Kansas. Obsessions include sustainability, yurts and extreme DIY. Also, she makes sculptures out of food, mostly potatoes. She never updates her blog at http://badmetaphor.net.