The Hateful Eight is the story of a group of awful people – some of whom are openly racist – who are trapped inside a snowy location for several long, uncomfortable days. Which oddly makes it a fitting movie to open on December 25, since that is the experience many of us have going home for Christmas.

The film opens with bounty hunter John Ruth (Kurt Russell) traveling across Wyoming to deliver his prisoner Daisy Domergue (Jennifer Jason Leigh). On the trail, Ruth stumbles across fellow bounty hunter/Civil War hero Major Marquis Warren (Samuel L. Jackson) and Sheriff Chris Mannix (Walton Goggins), who fought for the South. Ruth reluctantly gives them both a ride into town, since the alternative would be to leave them to freeze to death.

They all end up at Minnie’s Haberdashery, a roadhouse, where they must stay until the snow clears. The place is filled with a number of suspicious characters. Ruth begins to fear that one or more of them may be there to free Domergue.

Hateful Eight has some great scenes and the middle of it does a wonderful job building suspense, but it ultimately falls apart due to writer/director Quentin Tarantino’s indulgences. Tarantino is a director who consistently picks intriguing, engrossing projects, so Hateful Eight is by no means unwatchable. But it does feel overly long and badly paced. The final act, in particular, serves up a ridiculous conclusion that drags on forever and just feels silly. The end feels more like a parody of a Tarantino film than an actual one. 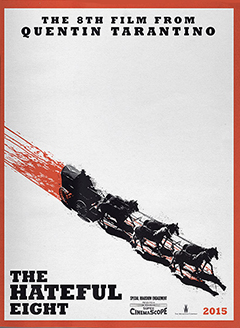 There is also absolutely no reason for the almost three-hour runtime. There are so many long, dull shots of people riding wagons through the snow and long scenes where characters have casual conversations that it feels like Tarantino could have cut it down to two hours without losing anything important. The pacing feels almost antagonist at times, like Tarantino is just have two characters blather on endlessly because he wants you to give up. An hour into the film I checked my watch, baffled that nothing had really happened yet.

The Hateful Eight‘s cavalier use of the N-word also had me feeling uncomfortable. This is not a new phenomenon. Tarantino has always seemed overly fond of using the word, but Daisy Domergue may set a Tarantino character record for using the word. At the end of the film, when talking about Major Marquis Warren, every third word Domergue says is the N-word. It feels absurd. It’s hard to believe that anyone, even the most gleeful racist, would ever lean on the word as much as the characters in this film do. It’s like Tarantino had a specific word count he was trying to hit, so he just plugged in the N-word until he reached it.

The shame is that while the film is free with the N-bombs, it shies away from an authentic examination of racial politics in post-Civil War America. Warren is a well-developed character, a black former soldier turned bounty hunter who has seen the North win the war. But that doesn’t mean his fight is over, he still faces racism from everyone around him, whether subtle or overt. The fact that he and Chris Mannix, the Southern soldier, have to form an uneasy alliance to survive is a clever idea. But Tarantino’s look at the time’s racial politics is surface at best and seems little more than a set up for the action. It seems like a cop out to not dig deeper.

There is a great scene featuring Warren and General Sandy Smithers (Bruce Dern), who fought against Warren in a battle during the war. Smithers is at Minnie’s Haberdashery looking for information about his missing son and Warren uses that information to his advantage to antagonize Smithers.

I also really loved Kurt Russell in this film. This part does feel like a return to Russell’s former glory. Seeing him with a big bushy mustache and a cowboy hat barking out orders is glorious. I’ve missed seeing him be a bad ass. I truly hope this is the beginning of a career resurgence.

But even with Russell’s great performance and a collection of really great scenes, The Hateful Eight is ultimately disappointing. It’s overly long and badly paced and ends with a lackluster finale. If you are a huge Tarantino fan, you may be willing to look past the film’s flaws to get to the good part, but casual fans are likely to be underwhelmed. 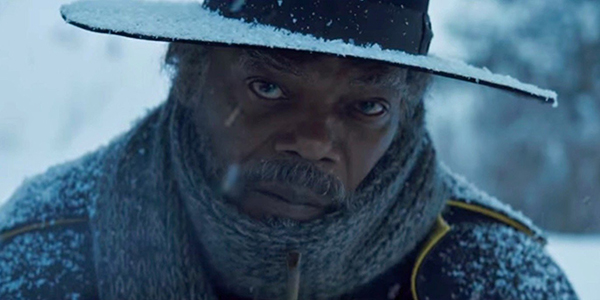