Jennifer Lawrence plays real-life inventor of the miracle mop Joy Mangano. After injuring herself while cleaning, the struggling mother of three creates the first self-wringing mop. Although the real Joy Mangano is now a household name and QVC icon, the film portrays her bumpy road to entrepreneurial success – numerous failed attempts to sell her product, crippling debts and patent issues that almost ruined her.

It’s a truly fascinating story worthy of a biopic. But in order to get the story, you have to sit through a tangled mess of nonsensical family drama, overacted soap opera metaphors and bizarre dream sequences. The struggle with any biopic is narrowing in on the noteworthy aspects of an individual’s life. Nobody is so interesting that every aspect of their life needs to be documented for the world to see. This is where David O. Russell failed.

(Making matters worse, many of the events and characters depicted in the film are fictional embellishments created by David O. Russell, who says these elements were inspired by other “daring women” besides Mangano.)

The first third of Joy is an endless parade of poorly-edited family drama. We are introduced to every single one of Joy’s shitty relatives and the ways in which they have crushed her spirit throughout the years. Her mother (Virginia Madsen) is a soap-opera-obsessed hermit who, rather than being grateful that her daughter has taken her in, treats Joy like a servant. Her selfish half-sister (Elisabeth Rohm) dumps their emotionally-stunted father (Robert De Niro) on Joy’s doorstep when she decides she no longer wants the burden of caring for him. Her ex-husband and the father of her children, Tony (Edgar Ramirez), lives peacefully in her basement. Apparently this is very wrong and every one of her shitty relatives reminds her of this as they occupy more and more space in her house. The notable exception is her loving grandmother (Diane Ladd), who provides unnecessary narration at her leisure – her voice seems to weave in and out of the film whenever someone reminds David O. Russell that Joy has a grandmother. 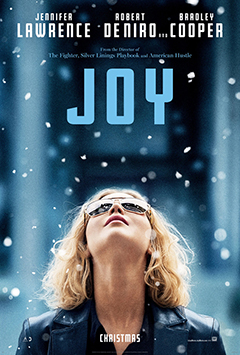 Clearly Joy’s home life sucks, and I’m sorry for her. But I don’t really care. I wanna see her make that fucking mop.

After another 30 minutes of surreal dream sequences, pointless flashbacks and a really forced cicada analogy, we finally get to see that. It’s fascinating to watch the process unfold – from Joy’s original design concepts that she scribbled with her daughter’s crayons to her futile attempts to explain the 300 continuous loops and self-wringing design to her family in order to gain their financial support. We get to see that Joy has a spectacular dream team to ensure her success – and no, it’s not the gaggle of emotionally-stunted succubi that crowded the first third of the film. Her best friend Jackie (Dascha Polanco) and her ex-husband Tony stand by her as business partners and moral support on her quest to get her mop on the market (both in the film and in real life). With their help, Joy is able to take her invention to QVC – a revolutionary new network and her last ditch effort to make any money off of the product.

Things get a little rocky at this point, mostly due to an oddly flat performance by Bradley Cooper as QVC executive Neil Walker. He and Jennifer Lawrence have shown they have on-screen chemistry, but it seems that nobody really figured out what their dynamic was supposed to be. At first he seems to be a go-getter who knows his network and knows what he wants. I was in for that and was prepped for plenty of bullheaded arguments between Neil and Joy regarding her inventions and branding. But all it takes is one argument and a furious glare to get Neil to give Joy a second chance, putting her in front of the camera this time, when her mop doesn’t sell. I’m down for angry, financially-struggling Joy to hijack an office in order to promote her own interests – it fits with the Joy we’ve known up to this point. But Neil giving in just because someone told him to feels like a real betrayal for a guy who seemed so confident.

Jennifer Lawrence turns in a great – albeit predictable – performance as Joy Mangano. Despite being ridiculously miscast as a 30-something divorced mother, she is her usual charming self. And there’s nothing necessarily wrong with that. She’s an incredibly charismatic actress and it’s no wonder that a director like David O. Russell would want to snatch her up for every one of his upcoming films. But Joy offers her no room for growth. Nothing about her performance felt new or particularly stood out, which is quite disappointing considering her level of talent. It would be great to see her stretch herself – and not into the oversexualized, bent over positions that David O. Russell seems determined to direct her towards in every one of his films. I seriously doubt that the real Joy Mangano got on all fours with her perfectly round ass in the air every time she cleaned up a mess around her home, but Jennifer Lawrence certainly does.

We are treated to two great supporting performances. There is the very-charming Dascha Polanco as Joy’s best friend Jackie, who on two separate occasions comes to Joy’s rescue as she tries and fails to sell her mop. Her comforting smile and quick wit is exactly what Joy needs as she pushes herself deeper into debt and loses her confidence. Edgar Ramirez does a wonderful job playing Tony, showing that he and Joy were better friends than lovers. He plays Tony as a man who is confident yet respectful, especially when dealing with his former in-laws. It can be hard to hold your own with Hollywood heavyweights like Jennifer Lawrence and Robert De Niro, but both of these actors are memorable, shining stars in an otherwise uneven movie.

More than anything, Joy suffers from a severe lack of editing. Rather than ending at the logical conclusion of the film’s central storyline, it continues to tell you all of the amazing things that happen to Joy 20 years down the line – all the things we already know that intrigued us enough to see a movie about Joy Mangano in the first place. It undoes the good will that the middle generated and makes the entire film feel clunky.

Despite most of Joy feeling like the equivalent of riding a roller coaster with your most annoying family members, it’s definitely an intriguing story. Joy Mangano has led a fascinating life and I’m glad to see major studios picking up the stories of female inventors and entrepreneurs. But nobody’s entire life is worthy of being documented on film. I really wish the makers of Joy had realized that. 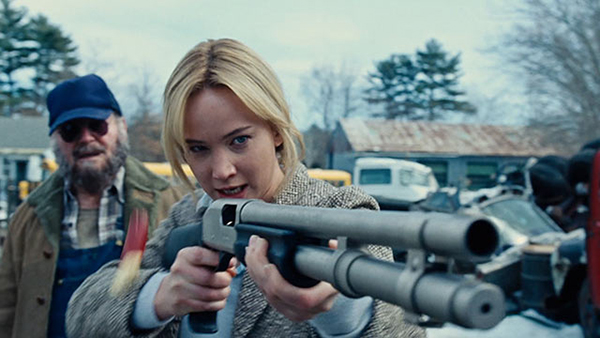