I’m pretty sure the last time I employed a coin toss in any sort of decision-making process was during a late-night beer run in my old dorm-style apartment in a converted warehouse. And, frankly, I was under the impression that was the only time (outside of a NFL kickoff) that a coin toss was ever really necessary. If you’re not already drunk and incapable of making an informed decision as to who is most fit to run to the dive bar down the road to pick up more Evan Williams, then you’re perfectly capable of figuring things out with words and logic – like a reasonable adult.

But then I woke up to hear the news that Bernie Sanders and Hillary Clinton were locked in a “virtual tie” at the Iowa caucus last night and a number of districts were decided by coin tosses. Okay? Personally, I think a rap battle would’ve been a far more entertaining way to go, seeing as Bernie has proven his ability to talk over classic beats and Hillary is ever desperate to grab the youth vote. But sure, flip a coin. Every time I think I’ve figured out American politics, some new bullshit comes along to confuse me, so why not add this nonsense to the mix?

Through the scientifically-sound process of random chance, Hillary Clinton came out as the official winner in Iowa. That’s fine. I’m a Bernie Sanders supporter, so I was obviously rooting for him, but apparently that’s the way things go. So be it. Though I am learning that this casual attitude and slight confusion towards the political process apparently makes me a very bitter “Bernie bro” and borderline conspiracy theorist. I’ve been called a lot of things in my life, but that one is definitely new. What’s worse, I’ve been learning that there is a really dangerous idea that in order to be a proper feminist, I should be supporting the female candidate.

You can call me whatever ridiculous moniker you like to try to ascribe some sort of entitled douche bag persona to me, but don’t for one second try to tell me that voting for a woman is the obligatory feminist thing to do.

There’s definitely a lot of progress to be made when it comes to feminism in politics and it’s amazing to see what women like Elizabeth Warren, Wendy Davis and Ruth Bader Ginsberg (just to name a few of my favorites) have accomplished. And no matter what you or I think of her politics, it’s pretty incredible to see how much Hillary Clinton has achieved. But voting for women does not inherently make you feminist and supporting male politicians does not make you sexist. It’s your reasoning behind those decisions that matters. It’s that kind of logic that gets Sarah Palin a vice presidential nomination.

Feminism isn’t about putting someone in power just because they share your gender. It isn’t about forcing others to support someone you like because their accomplishment would be revolutionary. It isn’t about voting for women because “it’s time.” Feminism is about creating equal spaces for men and women. It’s about treating Hillary Clinton as an equal to her male counterparts. It’s about questioning her ability to be a good President, not a good wife and mother. It’s about shutting the fuck up about her husband’s affairs and how this impacts her ability to lead a country.

Supporting someone solely based on their gender, sexuality, race or religion is, quite simply, pandering. And tearing down women for not supporting a female candidate is sexist. It’s not about blindly supporting women just because it would be progressive. It’s about allowing everyone, particularly women, to make their own informed decisions.

If that leads you to Carly Fiorina, I seriously question your ability to make an informed decision. 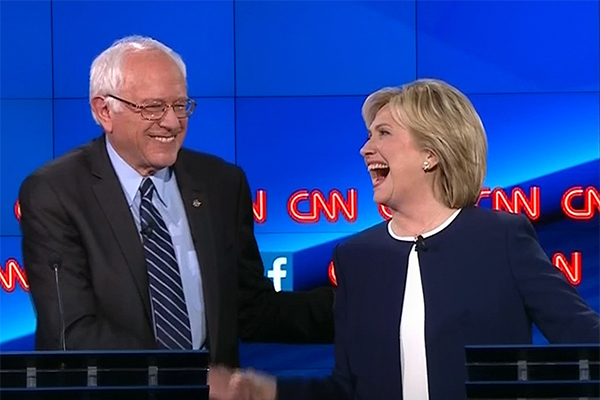