Song: “Writing’s on the Wall,” from Spectre, Jimmy Napes and Sam Smith

Animated Feature: Inside Out

Documentary Short: A Girl in the River: The Price of Forgiveness

With Chris Rock hosting the 88th annual Academy Awards, it was a safe bet that the Academy was going to get called out for its #OscarsSoWhite shenanigans. But while I fully expected a pointed opening monologue poking fun at Hollywood’s lack of diversity, I figured that would be the end of it. The monologue, unsurprisingly, was perfectly snarky and hilarious, but Rock didn’t stop there.

Rock kept #OscarsSoWhite the central theme of the night. There was a great segment showing what the year’s best films might have looked like if they featured black cast members, which had Whoopi Goldberg working as a janitor in Joy, Leslie Jones mauling Leonardo DiCaprio in The Revenant and Tracy Morgan gleefully eating danishes in The Danish Girl. There was also a brilliant video montage where Rock interviewed black moviegoers in Compton about how angry they were about #OscarsSoWhite and how many of the nominated films they had actually heard of. (The best part was when he handed them a real Oscar and had they do faux acceptance speeches.) The host kept the heat on Hollywood all the way through to the closing credits, which had “Fight the Power” by Public Enemy playing over top of them.

While I thoroughly enjoyed Chris Rock’s continued jabs at Hollywood’s racial inequality, I also liked the very sweet moment where he sold Girl Scout Cookies to the crowd, calling out anyone who didn’t immediately cough up money for the girls. I also just found him to be a charming host in general. His jokes were genuinely funny and it never seemed like he overstayed his welcome out on the stage. He’ll be a tough act to follow for any of the predicted possible 2017 hosts.

And while the show ultimately felt too long as a whole, it’s hard to say exactly what I would have cut. Nothing really jumped out as being out of place or a waste of time (with the possible exception of that Stacey Dash joke, which did not land at all). I enjoyed the show overall, though toward the end I started getting tired and was ready for the whole thing to be over.

I thought the show was run really well and I liked a lot of the little production choices they made. Little things like having the words and stage directions pop up on-screen while showing the clips for Best Original and Adapted Screenplays or really isolating and focusing in on the the nuances of the sound during the Sound Editing and Mixing clips made the technical awards seem more meaningful and easier to appreciate. (I also, for the first time ever, was able to understand the difference between Sound Editing and Sound Mixing, thanks to the the video clips.) I also really loved the way they showed stills of the Best Actor and Actress nominees on screens behind the presenters and panned the camera around to focus on whichever actor they were spotlighting. And Dave Grohl playing over the “In Memoriam” montage hit the exact right somber tone without overshadowing the memorial.

The only new flourish that I thought didn’t work was their attempt to run the winners’ thank you’s on a crawl at the bottom of the screen. The presenters themselves couldn’t see the crawl, so many of them ended up redundantly thanking people to be safe, which defeated the whole purpose. And it seemed like the gimmick was completely abandoned at the end of the show anyway, which just made it seem like a kooky failed experiment. 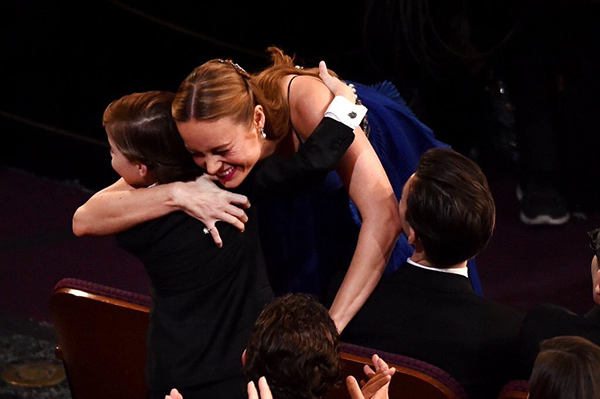 As for the awards themselves, there weren’t a lot of surprises, except possibly just how much Mad Max: Fury Road dominated the technical awards, while not winning any of the big categories. It also felt odd that Spotlight only won Best Picture and no other awards. Mark Rylance beating Sylvester Stallone for Best Supporting Actor was perhaps the most unexpected thing to happen, but I can’t really call a classically-trained, Tony-award-winning actor beating action star Stallone an upset.

The night’s big winner has to be Brie Larson. From talking about eating In-and-Out burger in her red carpet interview with Ryan Seacrest to making sure to celebrate with Jacob Tremblay before hitting the stage to accept her award, Larson came across effortlessly charming and sweet. (She even made a point of hugging each and every sexual assault survivor as they left the stage following Lady Gaga’s performance.) From Scott Pilgrim vs. the World to The United States of Tara to Community, I’ve always enjoyed Larson’s work, but she isn’t exactly a household name. She did great work in Room and this win helps finally get her the recognition she deserves. It’ll be interesting to see where her career goes from here. (Though selfishly, I’m holding out hope she doesn’t become too big to still have a cameo in the eventual Community movie.)

I was happy that Leonardo DiCaprio finally won (even if it means the end of a fantastic meme), though his waiting pales in comparison to Ennio Morricone, who became the oldest Oscar winner ever at 87. (This was his sixth nomination, but first win.) And while we’re on the subject of Oscar trivia, Alejandro González Iñárritu is the first director to score back to back win’s in 65 years.

Overall, it was a solidly entertaining Oscar night. Chris Rock was a great host and he’ll be a tough act to follow next year. (For what it’s worth, my vote goes to Louis CK for the next host, since he absolutely crushed it when presenting the Best Documentary Short film category.) There weren’t a lot of surprises, but it was a well-produced and entertaining show. 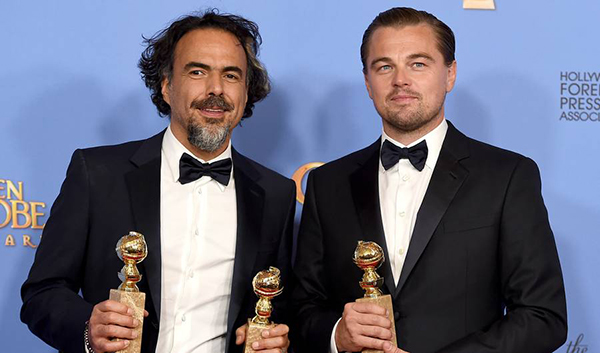