In an early scene in X-Men: Apocalypse, the ancient villain Apocalypse (Oscar Isaac) recruits Angel (Ben Hardy) to be one of his four mutant foot soldiers while Metallica’s “The Four Horsemen” plays in the background. Instead of the incredibly on-the-nose musical choice, I wish director Bryan Singer had gotten inspiration from the late, great Elvis Presley’s posthumous hit “A Little Less Conversation” and had given us “a little more action.”

For a big budget comic book film whose name promises us a cataclysmic confrontation, way too much time is spent talking. Characters wax poetic about their philosophical differences in the battle between humans and mutants. People talk about the events of the previous two X-Men films. They also give winking references to the original X-Men trilogy (including an incredibly-forced dig at X-Men: The Last Stand). Apocalypse talks and talks about his plans to wipe out civilization. Worst of all, Professor Charles Xavier (James McAvoy) talks to Erik Lehnsherr / Magneto (Michael Fassbender) about old conversations they’ve had in previous films. There’s so much talking that, by the end of the film, I was actually rooting for the apocalypse just so something, anything, interesting would happen.

The sad thing is, I actually enjoy the philosophical nature of X-Men. The debate between Charles Xavier and Erik Lehnsherr about how to survive in a civilization that hates and fears them is the heart of these films. I like that, even though they are often enemies, they can still get together and talk out their differences. But, at some point, you have to deliver on the action. Or, at the very least, if you are going to have so much talking, you shouldn’t simply be rehashing conversations we’ve seen countless times on-screen before.

The plot, as much as one exists, revolves around the awakening of an ancient evil named En Sabah Nur/Apocalypse. In the opening scene, which takes place circa 3,000 BC, we see Apocalypse transferring his consciousness into another body in order to survive. But, the locals stage a revolt while he’s distracted, trapping him inside a pyramid and burying him alive. He is freed in the 1980s and sets about a plan to … as best I can gather … kill most of society and force the survivors to rebuild civilization.

The film doesn’t bother to explain why he has to transfer his consciousness into new bodies if he can survive buried underground for 5,000 years without aging or weakening in any way. It also doesn’t explain his motivation for destroying humanity. And his desire to bring about an, um, apocalypse is undercut by a scene halfway through the film where he gains access to the world’s cache of nuclear weapons, only to unleash them in the lamest way possible. But most confusing is why, when recruiting four powerful mutants to be his horsemen he would choose Angel, whose only power is having wings that allow him to fly. (Seriously, two of the other horsemen can also fly – one of them can manipulate metal and the other controls the weather – so choosing Angel just because he’s thematically-appropriate to the horsemen motif seems really forced.) For a film with so much talking, nothing important is satisfactorily explained. 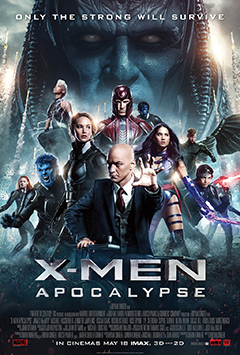 The other big problem is that there’s so little character development. The film introduces a lot of new characters, including Jean Grey (Sophie Turner), Scott Summers/Cyclops (Tye Sheridan), Kurt Wagner/Nightcrawler (Kodi Smit-McPhee), Ororo Munroe/Storm (Alexandra Shipp) and Psylocke (Olivia Munn). But while these characters look cool, they are given absolutely no character development. We don’t understand their motivations or desires, which makes it hard to care about the things they do.

The film fares slightly better with Charles Xavier, Magneto and Peter Maximoff/Quicksilver (Evan Peters), though a lot of that is because these characters are already well established thanks to previous films. Magneto’s character arc is fairly predictable, though Michael Fassbender does such a great job selling the character that it still works. And Evan Peters becomes the heart of the film, with very personal reasons for getting involved in the action. He also adds some much-needed levity to a film that feels over-serious and brooding.

Like in X-Men: Days of Future Past, Quicksilver also provides the film with one of its best action sequences. Personally, I will never tire of these sequences, where the super-fast mutant sprints around to fun music while everyone else is moving so slow that they’re virtually frozen in place.

There is another fun action sequence featuring an enjoyable cameo from a familiar face. The previews have actually spoiled this surprise appearance already, but I won’t on the off chance you’ve been lucky enough to avoid seeing them. I’ll just say that it was a welcome arrival that injected some much-needed energy into the film at a time it was starting to drag.

Still, while I greatly enjoyed those two sequences, I was underwhelmed by the rest of the film. Too much time is spent talking about events of the previous films or things yet to come in this film. The new characters feel underdeveloped and Apocalypse feels like a paper-thin villain with a nonsensical plan to end the world (that mostly seems to involve Magneto swirling metal shards around his floating body).

Ultimately, while there are a handful of cool visuals and fun scenes, the film as a whole just feels underwhelming. 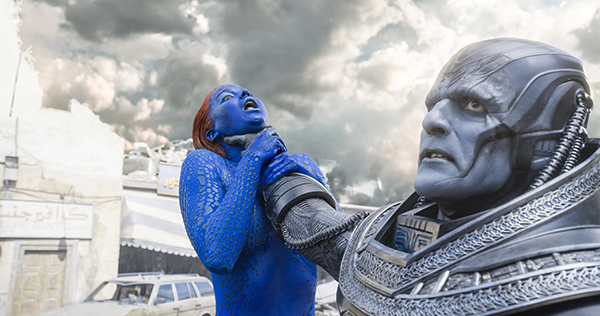