Looking past the satire of pop music and obvious parallels to This Is Spinal Tap, Popstar: Never Stop Never Stopping feels like a comedic reimagining of the Lonely Island’s rise to fame and Andy Samberg’s subsequent solo career.

The film centers around three childhood friends who make it big – Conner (Andy Samberg), Owen (Jorma Taccone) and Lawrence (Akiva Schaffer). Like their real-life counterparts, who formed the comedy troupe the Lonely Island, the trio formed a popular rap group called The Style Boyz. But Connor emerged as a star, launching a debut solo album that made him a superstar (much like Samberg, whose breakout casting on Saturday Night Live lead to, among other things, a starring role in Brooklyn Nine-Nine). As the success goes to Connor’s head, Owen becomes a recluse, leaving the spotlight to run a farm. Lawrence stays on as Conner’s DJ, but becomes increasingly frustrated by his ever-diminishing role.

Samberg has done a much better job balancing his solo success with his work with the Lonely Island than his fictional counterpart does, but I have to imagine it was fun for the group to play with these dynamics. It made for a very meta moviegoing experience, where I found myself wondering if, behind the jokes, there weren’t some real emotions being worked through in this film. 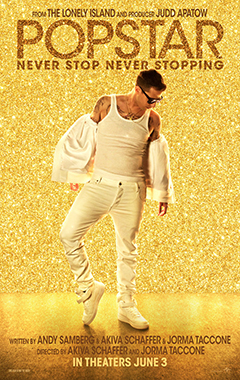 But beyond the intriguing meta component, Popstar is an incredibly fun mockumentary that feels very much in the style of This Is Spinal Tap. The faux documentary aesthetic allows for some fun celebrity cameos, with most of those stars playing fictionalized versions of themselves. It also allows the film to go on fun detours, which suits the Lonely Island’s sketch writing sensibilities. There are a number of silly vignettes, including a botched marriage proposal featuring Seal and some angry wolves and an epic battle with angry bees, that work within the documentary structure without feeling superfluous or distracting.

The film also does a good job poking fun at the modern music scene. There is a hilarious jab at Macklemore as one of Conner’s songs on his new album (“Equal Rights”) is meant to show solidarity with gay people, but ends up devolving into Conner talking about how not gay he is. There are also good jokes about music award shows, celebrity couples and stars who go overboard on social media.

One of the best bits of social satire is the film’s fictionalized version of TMZ. They perfectly replicate the bizarre faux chummy tone of the TMZ television show, with Will Arnett standing in for Harvey Levin. There are several cutaways to Arnett and his crew, all of which really amused me.

I also really enjoyed Tim Meadows and Sarah Silverman in their supporting roles. I’ve always been a big fan of Meadows and was happy to see him get a juicy role in the film. He plays Conner’s manager Harry and, while he mostly serves a straight man, he manages to get a lot of comedy out of the role. Silverman, similarly, gets good mileage out of playing Conner’s publicist, Paula.

Unsurprisingly, the music in the film is a lot of fun. Talking too much about the individual songs would ruin the fun, but it’s safe to say that if you are a fan of the Lonely Island’s music, you will enjoy the songs in the film. There are also a few fun cameos from people who have done songs with the group before. I was also a big fan of “Hunter the Hungry Is Gon’ Eat,” the breakout single by Hunter the Hungry (Chris Redd), an underground rapper on the verge of making it big.

The overall story is a bit formulaic and predictable, but the journey getting there is a lot of fun. Filled with social satire, amusing songs and a meta look at the state of the Lonely Island, there’s a lot to enjoy about Popstar. 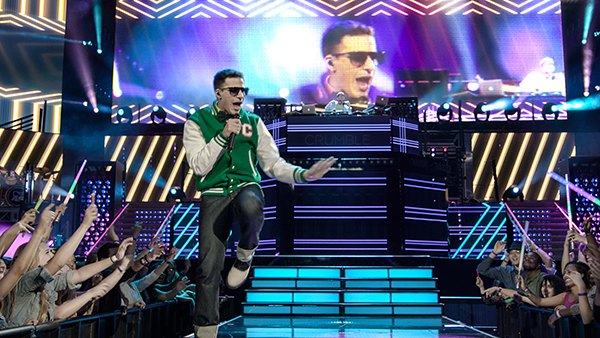