Well, it seems that Larry Wilmore, and his awesome staff, are leaving television way too soon. After only a year and a half on the air, The Nightly Show has been cancelled due to low ratings. It’s bullshit. The Nightly Show was one of my favorite late night programs thanks to its commitment to covering often ignored issues with both a sense of humor and compassion.

Comedy Central President Kent Alterman says the decision came from the show’s inability to gain traction in key social media platforms. The show never had the goal of churning out sensational viral videos, and perhaps that was its fatal flaw. They instead focused on tackling uncomfortable, racially-driven topics – and they did so with authority while still maintaining a comedic tone. That shit ain’t easy.

The cancellation sucks. It was a brilliant show that highlighted stories we rarely ever hear about, in ways we never really see. It had one of the most diverse and creative collection of comedians on late night television. I’m sad to see them go, but excited for what they will pursue next.

And while the show didn’t produce the sort of viral videos Alterman hoped it would, it produced some truly great, substantive content, which is readily available on YouTube. So I decided to track down what I felt were some of the best examples of the show skillfully tackling issues in a way that was truly unique to them. Enjoy!

“I gotta admit, I love white people serving me!”

Plantation themed weddings are apparently a thing. This didn’t exactly sit well with Mike Yard and Robin Thede, so they decided to pose as a couple interested in planning an authentic plantation wedding. Mike Yard’s commitment to pointing out the atrocities of slavery with a deadpan tone is utterly brilliant. Combine that with Robin Thede cheering for the one slave who managed to escape the property and you have one of my favorite segments the show ever did!

Gang Members on the Baltimore Protests

One of the most annoying aspects of living in Baltimore during the riots of April 2015 was suffering through the inaccurate (and frequently racist) news coverage. Larry Wilmore took a truly revolutionary approach to journalism when he opted to travel to Baltimore to sit down with gang members who had called a truce in order to help bring justice and peace to the city. The segment is not only delightful, but enlightening.

Mike Yard has a special talent for cutting to the core of complicated issues. His commentary on social progress one year after Ferguson is an excellent examples of this.

“How long did it take you to build that bomb?”

Everyone had an opinion on Ahmed Mohamed, the teenager arrested after bringing a homemade clock to school. Larry Wilmore was one of the few people who gave Ahmed a chance to speak about his passions and interests, rather than defend his innocence. It’s a very sweet conversation between two science nerds.

“I despise Fox’s agenda, but I admire their craft.”

One of the favored arguments of people who disapprove of the Black Lives Matters movement is to claim a “war on police.” The research on violence against police officers not only shows that this claim is false, but that it is currently one of the safest times to work in law enforcement. So how can people still believe there’s a war on cops when empirical evidence shows the exact opposite? Larry Wilmore breaks down the tricks Fox News uses to plant this idea in the mind of their viewers. And, in doing so, he reveals Fox News’ formula for deception.

“I haven’t forgotten about you, motherfucker!”

Larry Wilmore was committed to reminding his viewers that Bill Cosby is a rapist. It was always hilarious to see him bring up Cosby and scream, “I haven’t forgotten about you, motherfucker!” This segment shows why, exactly, Wilmore wouldn’t let us forget.

“The punishment for being a black man shouldn’t be death.”

When a black man dies at the hands of police brutality, many networks scramble to find any justification for his death. The Nightly Show never took this approach. They treated each new incident with nuance and respect, no matter how exhausted they were from covering these stories so often.

Black Church Fires in the South

After the news broke of their cancellation, Larry Wilmore expressed his sadness over the “Unblackening” at Comedy Central. As I was searching for clips, I came across this story about black churches burning – and couldn’t help but laugh when Mike Yard, in a conspiracy fog, asserts that The Nightly Show will eventually be cancelled by their white bosses.

The Nightly Show was a poignant, scathingly-funny social commentary that had no problem making its audience uncomfortable. Sadly, most shows in that category fail to find an audience. But what they accomplished in a year and a half was spectacular and I couldn’t be more excited to see what comes next from these brilliant comedians. 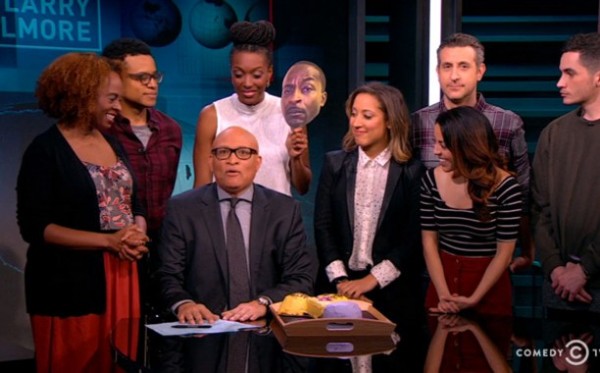