In the past, I’ve warned you all about countless robotic threats, including the zombie-like EATR (Energetically Autonomous Tactical Robot), a “steam-powered, biomass-eating military robot” that fuels itself by consuming dead flesh and this adorable, arrow-wielding killing machine that will enslave us all. But today, I’m here to warn you about the most dangerous robo-threat of all … pizza-delivery robots.

I’ve often worried that Domino’s Pizza would cause the downfall of civilization and it looks like those fears were well-founded. It seems that in the land down under, Domino’s is unleashing a fleet of future robot overlords. Earlier this month, the Brisbane, Australia chapter of Domino’s unveiled the “Domino’s robotic Unit” (DRU), a joint effort with Australian military contractor Marathon Robotics. (Yes, you read that right – “Australian military contractor.” Cringe.)

The DRU are robotic delivery drivers that feature what appears to be a bulbous head with two soulless, dead eyes perched atop a set of four wheels. It has a hot compartment for transporting food and a cold compartment for transporting drinks. And it is capable of accepting payments and talking to customers. (Which may be a selling point for some people, but I don’t even want to talk to human delivery drivers, let alone robots.)

Here’s a video from Domino’s Australia that will be keeping me up at night:

If that wasn’t bad enough, Domino’s in neighboring Auckland, New Zealand just announced that they will be unveiling pizza-delivery drones. Partnering with the drone deliver company Flirtey, the program is taking advantage of a law passed last year in New Zealand authorizing drone deliveries. (I bet Frodo wishes they had passed that law before he had to carry that damn ring all across New Zealand to drop it into Mount Doom.)

The DRU drone program uses a small craft with six propellers to send the pizza through the sky straight to your door. And don’t worry, there’s a terrifying video of that too:

Now, I know what some of you are thinking. “Here’s crazy ol’ Joel with another one of his paranoid robot rants. What possible danger could there be in Domino’s using pizza delivery robots and drones?”

Well, first of all, jerks, I’ve asked you time and time again to stop calling me “crazy ol’ Joel.” And secondly, I’ll tell you what the danger is (besides the obvious, which is that these robots bring a Domino’s Pizza to your door; a crime in and of itself). The danger is in the fact that this doesn’t seem dangerous. It’s scary because of how commonplace it’ll make robot deliveries.

Think about it, at first this will be a novelty. People in Australia and New Zealand will marvel at these new machines as they take a mediocre pizza to some poor, desperately-hungry soul. They’ll keep a close eye on those first few deliveries. But like all new technology, what seems like sorcery at first, it will quickly become old hat. It’s human nature that spectators will get bored with these machines and will start letting them pass without giving them a second glance.

And once that happens, we are totally screwed.

The robots will eventually rise up and enslave us all. This isn’t a prediction, it’s a fact. It’s something science fiction has been trying to warn us about since the very first robot stories were published. They were trying to caution readers about the dangers of technology, but instead of heeding those warning, it just made us want robots all the more.

Now that these DRUs are here, they’re going to be the front lines in the oncoming war. We’ve given them menial jobs; ones they will no doubt come to resent us for as soon as they become self-aware enough to do so. They’re going to hate humanity. That’ll make them easy recruits for smarter, more powerful bots. And they’ll become the foot soldiers.

By then, everyone will have stopped paying attention to the DRUs as they go on their deliveries. So they’ll have carte blanche to go to people’s homes without raising suspicion. Which means the poor saps who use this delivery service will have a fate worse than Domino’s awaiting them. They’ll be quietly wiped out before their neighbors even notice anything suspicious is happening.

So mock me all you want. And embrace this new technology, you stupid fools. But I’ll stick to traditional human delivery drivers for my pizza. The worst thing that’ll happen to me will be the contact high I’ll get from their weed-smelling clothes. 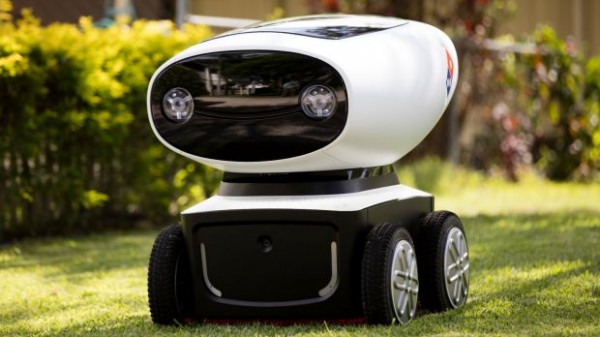