I think about death a lot. And not in an edgy or cool way; it’s mostly just extremely depressing and overwhelming. I have battled anxiety and existential dread since I was way too young to wrap my mind around either of those concepts. I was always uncomfortable with my existence and I was more uncomfortable with the idea of it ending. So, like many people who have trouble coping with the terrifying realities of life, I turned to comedy.

My mother was deeply invested in what she called my “comedy education” – that is, ensuring that I saw the most brilliant and subversive comedies during my formative years. Every so often, she would take me to Blockbuster and declare that she was a “terrible mother” as she grabbed a movie that I had not yet seen. A lot of the time, this would involve one of Mel Brooks’ films. From Young Frankenstein to Blazing Saddles, I took great comfort in the proof that there were other weirdos like me. And my favorite weirdo was always Gene Wilder.

I had very good social camouflage as a child. I never really got bullied and I was able to make friends fairly easily. But I managed this by hiding quite a bit of my true self. I knew I wasn’t like other kids around me, so I figured out fairly quickly how to appear like them. Looking back, it’s one thing I really regret. I had a social life and was invited to parties, but I very rarely had genuine connections with children my age. On more than one occasion, I would gripe to my mother about how upset I was that other kids didn’t appreciate my sense of humor or share my interests (mainly watching comedies from the mid-seventies). She always assured me that I would one day find my people and, until then, I should continue to enjoy the things I liked, even if that meant being different. So I became accustomed to tuning in to my favorite weirdos whenever I felt let down by the world.

Gene Wilder was a brilliantly bizarre man. I was first introduced to him through Willy Wonka and the Chocolate Factory and felt an instant connection. His performance in that film is strange, uncomfortable and even somewhat terrifying at times. I loved it. I delighted in a character who could look so silly but be so dark. In him I was able to connect with the uncomfortable strangeness I had buried within myself. I became obsessed with seeing more. My mom showed me Young Frankenstein and Blazing Saddles and I quickly developed a crush on Gene Wilder that has lasted my entire life. I also realized that I wasn’t the only Regan to take solace in his films.

I can’t watch either of those movies without thinking of my mom. Every five minutes, there is a line that I can recall her incorporating into everyday conversations. I quickly learned that my “comedy education” was just as much for my mom as it was for me. She has always joked that she molded my brother and me to be people who appreciated her sense of humor, which was sort of true. But exposing us to these films was more than just a concerted effort to get us in on the joke. These films were a safe haven for her when her own bizarre quirks alienated her from the rest of society. Joking about our “comedy education” was a way for her to ensure we always knew there were people like us, even if they only existed in film. I realized that if these odd folks could find their kin and thrive, there was also hope for me.

I found out about Gene Wilder’s passing after waking up in a hospital. My doctor had sent me for a six-hour EEG after my latest bout of dystonia. I had forced myself to sleep through half of it – an easy feat considering I couldn’t drink anything caffeinated before the test – and his death was the first thing I saw upon waking. It wasn’t exactly the news I had been hoping to see when I was finally detached from a dozen electrodes. I could feel my heart sink as I read the news. Gene Wilder had been one of my sources of comfort when things were going wrong in my life and seeing as I had just experienced something incredibly uncomfortable, I found myself feeling a bit lost. It’s an irrational feeling and I know that. But it was only a month ago that I was flapping my hand, uncontrollably shaking from dystonia, jokingly quoting the Waco Kid. “Yeah, but I shoot with this hand,” I said, trembling spastically as my mom laughed.

My existential dread has flooded back into my brain recently; presumably a consequence of my unpredictable health. I’m not necessarily afraid of death, but I’m overwhelmed by the unknown of the afterlife. I’m not religious and don’t really believe in heaven (though I’ve spent a lot of time trying to trick myself into believing just to make myself comfortable). When I’ve discussed my anxiety with people around me, I find the same hurdles I did as a child. Most of them believe in some sort of afterlife or take solace in the fact they’ll be reunited with their loved ones. I nod and pretend to agree, much in the same way I did as a child.

As I was struggling to fall asleep the other night, I became sad about Gene Wilder’s passing all over again. I felt alienated and very alone. Anxiety can make you selfish and all I could do was focus on my own mortality with no hope of comfort. And then it hit me, Gene Wilder died. He had gone and done the thing that scares me so much. I immediately felt like my younger self, convinced that my own odd tendencies couldn’t be so terrible because Gene Wilder also had them. I had spent so much time jumping through mental hoops in order to trick myself into believing things that made no logical sense to me. I kept trying to comfort myself by lying to myself (I should really know by now that doing so doesn’t ever work). I couldn’t relieve my anxiety by trying to convince myself that I would end up in some special paradise, but I was very okay with the indisputable reality that one of my heroes had ceased existing – and, yes, someday I would too.

Blazing Saddles has one of my favorite movie endings. Gene Wilder turns to Cleavon Little and asks him where he’s headed. He responds, “Nowhere special.”

Gene Wilder thinks on it, then says, “Nowhere special? I’ve always wanted to go there.” And the two ride off into the sunset together. 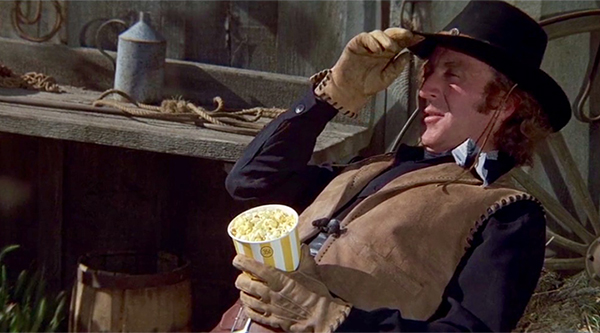