From late September through the first week of February, I spend a lot of time on Monday through Saturdays making sure that all of my commitments are fulfilled so that I can watch the only team sport that about which I give the remotest of shits: The National Football League.

This week, my football enjoyment was marred because the only thing any commentators wanted to discuss was the controversy stirred up earlier in the week by our President, and his inability to understand the most fundamental right of American citizens: the right to free expression.

For those of you that missed all of the hub-bub because a.) Football is for cromagnon jocks and wannabe cormagnon jocks, b.) you were blissfully powering through a season of Portlandia or c.) your synapses were already firing on overload because of your outrage at Senator Bill Cassidy of Louisiana and his big lying face, this is what you missed:

Just so we’re clear, The President of The United States of America just advocated an economic boycott against a $25 billion dollar American industry because those at the top of said industry allow their employees to exercise the most important right as American citizens? I’m not still drunk from the weekend, right?

I already know what Trump loyalists/apologists and good ole’ fashion contrarians are thinking:

“But, Tony, isn’t the President of the United States entitled to his freedom of expression, too?”

Why yes, yes he is, but like it or not whoever is sitting in that office has an unfair advantage over … well, EVERYONE when it comes to getting their message heard and, even more scarily, enforced. While President Trump may seem like the underdog in a “one billionaire vs. 32 billionaires and a few hundred millionaires” fight, keep in mind that he has the power to screw with their business interests in hundreds of ways, including using the FCC to cut off one of their biggest revenue streams; like Earth in the Marvel Cinematic Universe, the NFL is hopelessly, hilariously out-gunned.

NOT ONLY IS PROTESTING THE FLAG, THE ANTHEM, OR EVEN HIS BIG ORANGE FACE CONSTITUTIONALLY PROTECTED, AND, THEREFORE, AS PATRIOTIC IT GETS, BUT WHAT DID HE HOPE TO ACCOMPLISH WITH THIS OUTBURST?

Because unless it was designed to create a big annoying distraction, it clearly didn’t work. NFL players, coaches and owners, men who thus far have displayed a wide
range of opinions on the appropriateness of taking a knee during the national anthem as a form of protest all came together to agree on one thing: Freedom of expression is the right of all American citizens, and their’s will not be trampled. By anyone.

And, in an effort to prove that we can add loyalty and respect to the list of things that he does not understand, right under patriotism, during his rant the President also said:

Wouldn’t you love to see one of these NFL owners, when somebody disrespects our flag, to say, ‘Get that son of a bitch off the field right now. Out. He’s fired. He’s fired!’ You know, some owner is going to do that. He’s going to say, ‘That guy that disrespects our flag, he’s fired.’ And that owner, they don’t know it. They don’t know it. They’ll be the most popular person, for a week. They’ll be the most popular person in this country.

No, Mr. President, the most popular person in the country today is, like many of the rest of us, just a guy torn between loyalty to the ideal of his country and having the backs of his friends and colleagues who have had enough.

I think if we’re going to appoint someone arbiter of what is and what is not disrespectful to our flag, our anthem and those that have died or been wounded defending our freedoms, we should probably pass on the guy with five deferments (four student and one medical) that allowed him to escape military service altogether, and go with the guy in the video above who served in three tours of Afghanistan and was awarded a Bronze Star for rescuing wounded soldiers while under enemy fire.

The bottom line is this: Regardless of who agrees or disagrees with the players’ message, they have every right to send that message through peaceful protest. And not even the President has the right to question that. 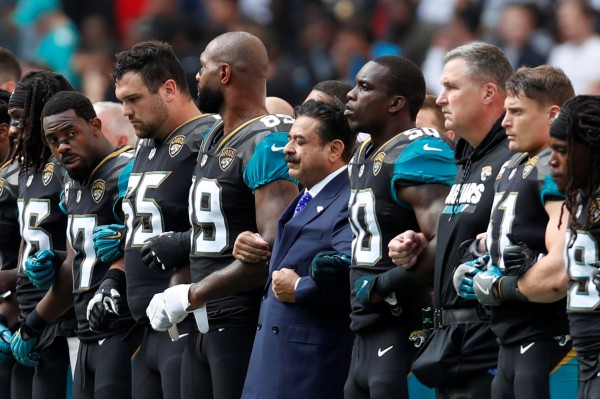