It started out as a simple bait-and-switch.

In the season three premiere of Rick and Morty, “The Rickshank Rickdemption,” it appeared fans got a glimpse into Rick Sanchez’s backstory when they saw his wife Diane get killed in an explosion caused by an alternate version of Rick. However, the entire backstory ends up being a fabrication invented by Rick in order to distract his interrogator, Cornvelious Daniel, to give Sanchez an opportunity to escape Galactic Federation prison.

At the end of the episode, Rick lets Morty know what actually drives him:

Rick: He threatened to turn me in to the government, so I made him and the government go away. I’ve replaced them both as the de facto patriarch of your family and your universe. Your mom wouldn’t have accepted me if I came home without you and your sister, so now you know the real reason I rescued you. I just took over the family, Morty, and if you tell your mom or sister I said any of this, I’ll deny it and they’ll take my side because I’m a hero, Morty. And now you’re gonna have to go and do whatever I say, Morty, forever! And I’ll, I’ll go out and I’ll find some more of that Mulan Szechuan teriyaki dipping sauce, Morty.

Morty: What are you talking about?

Rick: Because that’s what this is all about, Morty.

Rick: That’s my one-armed man! I’m not driven by avenging my dead family, Morty! That was fake. I-I-I’m driven by finding that McNugget sauce.

Morty: What the hell?

Morty: What are you talking about, Rick?

Rick: That’s what’s gonna take us all the way to the end, Morty. Season – nine more seasons, Morty. Nine more seasons until I get that dipping Szechuan sauce. What is that? For 97 more years, Morty! I want that McNugget sauce, Morty.

It was a funny throwaway joke meant to subvert fans’ expectations. But then, after the episode aired, the quest to bring back McDonalds Szechuan sauce took on a life of its own. McDonalds, unsurprisingly, saw dollar signs and decided to get onboard – sending a large vat of the sauce to Rick and Morty creators Dan Harmon and Justin Roiland last July and then, last October, offering limited qualities of the sauce as a way to promote their Buttermilk Crispy Tenders.

The latter move did not go well. The sauce was only available at select locations and in limited quantities. Most fans who showed up walked away empty handed. Packets of the sauce were sold on eBay for absurd amounts of money. One fan even reportedly traded his car for a packet of the sauce.

Much has been written and said about the reemergence of this once-forgotten sauce. Somehow, this whole debacle caused in-fighting among the fan community and, to outsiders, became an indictment of the fanbase as a whole.

However you feel about Rick and Morty fans and their clamoring for this elusive sauce, it’s hard not to see this whole story as a giant win for McDonalds. Even with the negative PR over their first limited re-release, they’ve gotten close to a year of free promotion off of one episode of a popular animated TV show. And, being the wise corporate behemoth they are, this past week they made the sauce available in larger quantities in all of their locations nationwide.

Full disclosure: I am a fan of Rick and Morty. I have also interviewed Dan Harmon and Justin Roiland about the show. So admittedly, I was curious what all the fuss was about with this sauce. However, I was not one of the people camping out in hopes of scoring the sauce last October. Instead, I assumed (rightfully so) that the giant soulless corporation would eventually make the sauce readily available, so I waited until that was the case to give it a shot. 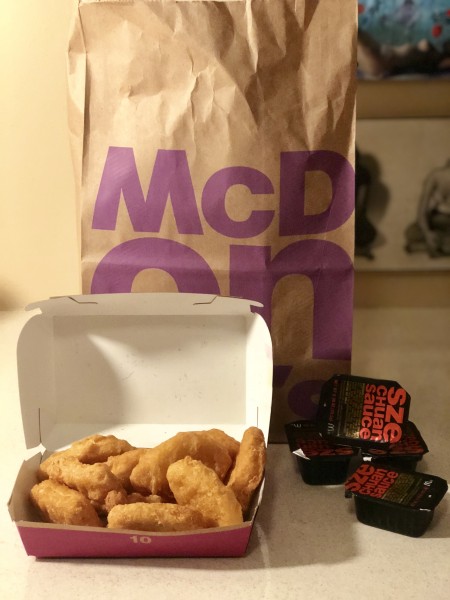 I hit up my local drive-thru and ordered Chicken McNuggets and asked for the sauce. As you can see from the photo to the right, they certainly weren’t being stingy with it (though perhaps being a white guy with a beard asking for the sauce, they thought it best not to risk upsetting me). I drove home with the loot and decided to finally find out if it lived up the the hype.

And I’m here to tell you … it was fine. Perfectly fine. Not amazing, but not terrible either. It tastes like a sweet teriyaki sauce. It’s enjoyable if you’re looking for something different to dip your nuggets into, but nothing I would go out of my way to seek out. (In fact, the only fast food dipping sauce I feel at all passionate about is Chick-fil-a’s Chick-fil-a sauce, which I might actually trade my car for if I lived in a postapocalytpic hellscape where it was no longer widely available.)

I’m not disappointed the sauce turned out to be underwhelming. But that’s probably for the same reason I never felt that invested in this entire saga up until now. The Szechuan sauce joke was always meant to be a silly throwaway gag. Everyone’s reactions to it says far more about them then it does about the show or the sauce or fandoms in general.

Sometimes a sauce is just a sauce. 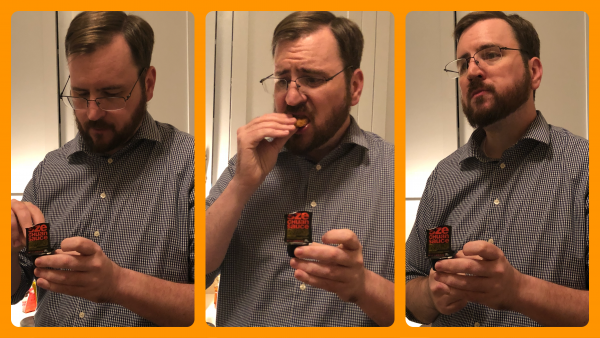