I was skeptical for the same reason many of you are likely skeptical. I wasn’t convinced Alden Ehrenreich could fill Harrison Ford’s shoes. I was concerned about directors Phil Lord and Chris Miller being fired and replaced by Ron Howard. I wondered if it was a good idea to be making a Han Solo prequel movie in the first place. I wasn’t sure there was a story worth telling.

But, I’m happy to tell you I was wrong. On all fronts. Solo: A Star Wars Story was utterly delightful. I was completely charmed by this film. It simultaneously feels like a story that belonged in the Star Wars universe while avoiding feeling like a lazy retread of previous films.

The most impressive feat was the way writers Lawrence Kasdan (who wrote Star Wars: Episode V – The Empire Strikes Back, Star Wars: Episode VI – Return of the Jedi and Star Wars: Episode VII – The Force Awakens) and Jonathan Kasdan (Lawrence’s son) were able to pay off fan expectations in ways that felt satisfying. Going in, viewers well versed in Star Wars lore expect to see certain moments from Han’s life – how he met Chewbacca (Joonas Suotamo), how he won the Millennium Falcon from Lando Calrissian (Donald Glover) in a game of Sabacc, how he was able to complete the Kessel Run in less than 12 parsecs, etc. We see all of these moments in the film, but they aren’t simply boxes the Kasdans are checking off. They are integral to the plot and help to show how Solo became the scoundrel we know and love. (How Han and Chewy meet feels particularly satisfying and is the moment the film really picks up steam.)

The writers know which tropes to lean into, which ones to subvert and which ones to avoid altogether. (For example: There’s a moment where our heroes are about to enter into a dangerous situation and instead of uttering the classic Star Wars line: “I have a bad feeling about this,” this young, inexperienced Solo tells the crew: “I have a good feeling about this.”) They even manage to show Han shooting first – a moment that became a dividing line among fans and Star Wars creator George Lucas when Lucas released a reedited version of A New Hope that had Greedo, not Han, firing the first shot in their encounter in Mos Eisley Cantina – in a way that isn’t simply fan service, but is actually a defining moment in Han’s life.

The ensemble is incredibly solid. While Alden Ehrenreich doesn’t look or sound exactly like a young Harrison Ford, he is able to seamlessly capture the mannerisms and charisma that made the character so iconic. Donald Glover is also really great as Lando, however his attempts to recreate Billy Dee Williams’ unique cadence comes off as more of a bad, distracting impression. Emilia Clarke, Woody Harrelson and Thandie Newton are all welcome additions to the Star Wars universe. Paul Bettany, who was brought in after Lord and Miller were fired and Michael K. Williams dropped out due to a scheduling conflict, plays the film’s big bad, Dryden Vos, and absolutely nails the role. However, my favorite new character was L3-37 (Phoebe Waller-Bridge), Lando’s droid copilot who is tired of seeing her metal brothers and sisters subjugated and dreams of a robot revolution.

What I liked most about the film is how inconsequential it felt. These are characters existing on the fringe of the Star Wars universe. They aren’t looking to overthrow the government or to blow up planets with a Death Star. They simply want to steal or to skim enough off the top to get by. It’s the dirty, forgotten underbelly of the galaxy where people do what they have to to survive. And that is the perfect breeding ground for a character like Han Solo and one that helps contextualize how he became the callous, detached antihero we know and love in A New Hope.

While The Force Awakens and The Last Jedi are satisfying continuations of the Skywalkers’ saga, Solo feels like the first film to show the true potential of Disney’s extended Star Wars universe. It feels fresh and unique while still demonstrating a clear understanding of what Star Wars fans love about Star Wars. There are elements of it that will change the way I rewatch the original trilogy. I feel like I understand Han better. And Chewbacca. And the Millennium Falcon. And Han’s relationship with Lando.

So, if you have a bad feeling about this, I’m here to tell you that you’ll be pleasantly surprised. The odds of an unnecessary big budget prequel with a troubled production and a young cast attempting to fill some pretty big shoes actually working have to be somewhere around 3,720 to 1, but Han Solo has always had a knack for defying the odds. 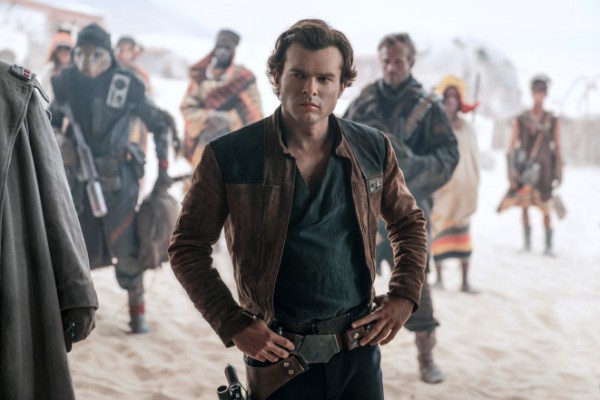