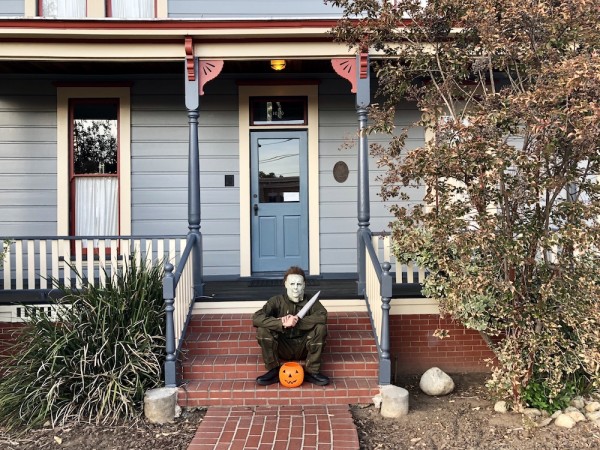 Filmed over a four-week period in May of 1978 for a budget of around $300,000, John Carpenter’s Halloween has become an enduring classic that has spawned countless sequels, reboots and imitations. While the film is set in n the fictional town of Haddonfield, Illinois, Carpenter actually shot the film in California. The neighborhood containing Laurie Strode and Michael Myers’ house is actually in South Pasadena.

Joel Murphy and Molly Regan decided to take a trip to South Pasadena to visit these iconic locations. Myers’ house has been designated a historic landmark and has a sign on the front discouraging passersby from climbing onto the front porch. The current owners of the Strode house are much more accommodating. They have a variety of fake pumpkins available on their porch for fans to borrow to recreate the shot of Laurie waiting to be picked up for her babysitting gig. And, on Halloween night, they were passing out candy to anyone who stopped by.

The neighborhood was filled with a variety of Michael Myers, including a dad who was holding a toddler who kept dropping candy on the ground that he then had to pick up. The adorable neighborhood children, who were all out trick-or-treating seemed to embrace the various Myerses. One small child excitedly waved “Bye, Michael” to one of them. It seems that, despite the horrific incidents that occurred 40 years ago, Haddonfield has become much more family friendly these days.