It’s hard to believe this movie actually got made.

When you consider the amount of time spent making this film and the amount of people who were involved in it, it is really quite baffling. Someone had to write the script (namely Akiva Goldsman). That script undoubtedly had to be approved by the higher ups at Warner Bros. Then actors had to be cast, costumes and sets had to be designed, an entire production crew assembled and at no point did anyone stop and say, “Are we really making this movie? This movie?”

Batman and Robin killed a franchise. After the three previous, highly lucrative films, this terrible movie soured everyone on continuing that Batman series. It took eight years and the expert guidance of Christopher Nolan to set the ship right again after this train wreck.

For reasons unbeknownst to me, Joel Schumacher took over a franchise that Tim Burton had established as gritty and Gothic and turned it into a neon version of the Adam West Batman series. Arnold Schwarzenegger plays Mr. Freeze, a scientist who is supposedly broken up about his sick, frozen wife, but who spends the whole movie stealing diamonds for an ice death ray and rattling off horrible one-liners like “Ice to meet you.” George Clooney, who plays Bruce Wayne/Batman, clearly checked out of this film early on in the process and seems to just be going through the motions with every unenthusiastic line delivery. Uma Thurman, who plays Poison Ivy, seems to think the film takes place in the 1940s – at least that’s the only explanation for her bizarre accent throughout the film. Alicia Silverstone, who plays Batgirl, quickly reminds you in this film why you haven’t heard the name Alicia Silverstone in 15 years. 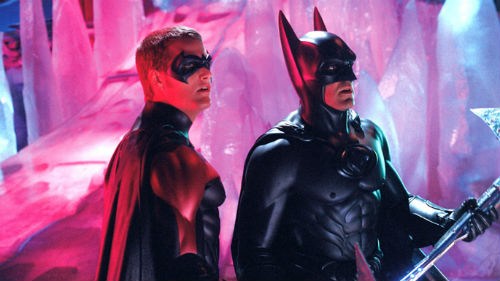 But by far the film’s biggest sin is what it did to Bane. Bane, played in the film by Jeep Swenson, is presented as a bumbling monosyllabic henchman working for Poison Ivy. He’s there mainly as muscle and comic relief. In the comics, however, Bane was created to be Batman’s physical and intellectual equal. He wears Batman down psychologically and then breaks his back, defeating him in a way no villain ever has before or since. Creative license is one thing, but using a character’s name and likeness in your film while stripping away everything that made him unique and interesting just so you can have him be the moronic henchman is insulting. Just create another dumb guy who isn’t named Bane. Or, better yet, write a better script.

The rest of the plot is no better though. Mr. Freeze goes around Gotham stealing diamonds to power his ice guns. Poison Ivy uses pheromones to make men fall in love with her, which causes a rift between Batman and Robin as they both want her. Alfred is conveniently dying of the same disease Freeze’s wife has. And instead of being Commissioner Gordon’s daughter, Batgirl is Barbra Wilson, Alfred’s niece. The way she discovers Bruce Wayne and Dick Grayson’s secret identities and becomes Batgirl is thanks to some of the worst password encryption I’ve ever seen in a movie. Alfred gives her a file to deliver to someone else which contains every single sensitive detail about Batman and Robin and the password is the name of a woman whose signed photograph sits prominently on his desk. I know he’s old, but come on, Alfred, step up your game.

All semblance of realism or darkness has been thrown out in this film. The opening battle sequence has Batman and Robin escaping from a rocket by windsurfing back down to Earth. Freeze’s goons move around on ice skates with hockey sticks in hand. Zany sound effects are sprinkled throughout the film. During a bidding scene for a date with Poison Ivy, Batman pulls out a Bat-credit card to win. It wants to be a live cartoon, but fails.

The films clocks in at right around two hours, which just prolongs the agony to a truly brutal level. From the opening scene, you know this is not going to be a good film. Once Robin grabbed on to the side of the rocket to rescue Batman, whose hands were frozen to the interior, you knew there was no hope of redemption. Watching the entire film start to finish is a test of any Batman fan’s endurance.

I knew this film was terrible when I saw it in the theater in 1997. But watching it now after having seen Nolan’s version of Batman and knowing what this franchise is capable of makes it absolutely intolerable. 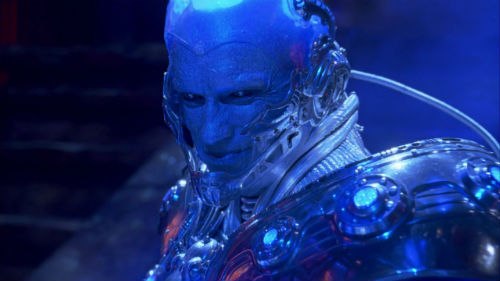