Well, this week has been more eventful than I would have expected. I went into this weekend expecting to write about the Bruce Jenner interview and my surprise when I saw how informative and trans-positive it was. Seems like a great topic for the column, right? But that idea was quickly thrown out the window come Monday around 3 pm.

That’s when (depending on who you ask) a group of high school students were funneled into the area around the Mondawmin mall with no way to get home due to a shut down public transit system, and greeted by officers in riot gear. The citizens of my hometown, Baltimore, rioted. And they rioted like we had never seen before. Bruce Jenner’s transition, while still a very important issue, seems quite a bit less relevant after the events of last evening.

Things escalated quickly, with rioters being tear-gassed, crowds spreading throughout the city and mobs committing massive property damage. Maryland was declared to be in a state of emergency. The National Guard was called in. I, for the first time in a while, was incredibly grateful to live twenty miles outside of the city.

And then, of course, came the outpouring of concern, disdain and outright racism on social media. Everyone has an opinion, and my Facebook feed was blowing up, considering the location of most of my friends. I fully admit to taking a more revolutionary approach to political activism and riots as a concept, and do not expect everyone to apply this same philosophy. But what I saw was not necessarily a difference in that opinion, so much as a blatant disgust for the citizens of a city everyone was claiming to love, but so clearly hates.

Facebook is usually a source of annoyance for me, but that annoyance is mostly focused on kitschy memes stating that the individual is a “proud bitch” or in need of a larger wine glass. But last night I was fuming.

So I got to thinking, trying desperately to find a solution to my rage, and I think I came up with one. It is with great pleasure that I present to you the second Poppin’ Molly Handy Guide!

* Particularly useful for the “I’m not a racist, but…” argument

“Animals”, “savages” and “thugs” are all thinly-veiled terms meant to refer to minorities behaving in undesirable ways. While technically they could be applied to people of any race, they typically are not. People tend to gravitate towards terms like this in order to get out controversial, racially-motivated opinions while shielding themselves from language that would come off as blatantly offensive.

Don’t let them get away with it. Be the jerk who reminds them that all of those terms are merely an attempt to use the N-word without getting called out for it.

Bonus points if you type your response with a smug look of self-satisfaction.

People are really fond of quoting the version of MLK that was fed to us by our middle school history books. The nice reverend who just wanted us to walk in a straight line in suits and look really dignified as we politely ask for equality. Much of MLK’s legacy has been erased and his character has been whitewashed to make him a more palatable figure for mainstream audiences.

For every person who preaches non-violent resistance and shames rioters for betraying the civil rights leader by posting a meme quoting his, “I have a dream,” speech, counter back with a quote from his, “Letter from Birmingham Jail,” in which he shames the white moderate. Remind them that he referred to riots as the voice of the unheard.

If you want to get really shitty, remind them that, while he took a nonviolent approach, he ended up just as dead as Malcolm X.

Property damage is not offensive, murdering an innocent civilian is

I have seen more people complain about property destruction than the actual brutal death that set the stage for these riots in the first place. Many are crying about the innocent shop keepers who have done nothing but watch their livelihood crumble in the wake of the riots.

And I’m not saying that’s not awful. It’s terrible. Nobody should have to stand by and watch their business fall to pieces at the hands of rioters who are expressing legitimate, though at times misdirected, anger.

But at the core of the issue is the death of Freddie Gray. A man who was arrested with no charge. Who died in police custody. Who was alive when he was put in the back of a paddy wagon and exited with most of his spine detached from his body.

That warrants at the very least the same level of offense, if not a significantly higher amount, as damaged property.

And saying, “I understand that his death is tragic, but …” does not count as acknowledging it. It is a way to minimize the events that led to these riots in order to justify your discomfort and outrage at a dirty city.

The National Guard being called is NOT a good thing

Hide anyone who says “Thank god they finally called the National Guard!” This is not a good thing. People who are praising their presence are ignoring the core issue of power abuse from our higher institutions. There is not a grasp of the main problems at play.

We DO NOT want the National Guard in our city

There are cleanup efforts across the city. There are places serving lunch to children who are not in school due to closings. You can tweet your location to the Baltimore Rescue Bus, and they will pick you up if you have no way to get home before the state-mandated curfew. Even if these things do not personally impact you, spread the word. Get the information out there. Help those who need help.

Listen to people with firsthand accounts

Most importantly, trust firsthand accounts over the mainstream media. Twitter is a great resource. My friends who live in the city have been wonderful about updating us all on the goings on and most importantly their safety.

Search every resource you can to crush your own biases and get all sides of the story.

I hope these tips have helped you all stay a little sane in this situation. It’s a scary time for those of us living in this area, but fear is not an excuse for despicable discourse. Remember that many of us are safe at home, writing comfortably from our living rooms. While we may not like what’s going on, remember why it is happening. Remember that there was a real life lost, and there are real lives at stake now.

And if you’re really so concerned about the city you love being destroyed, there is a clean up effort starting today on the corner of North Avenue and Pennsylvania Avenue. They are asking that you bring gloves, brooms, trash bags and food. Go restore the city that you love so dearly.

It’ll help a whole lot more than changing your profile picture to a sobbing Natty Boh guy. You know they don’t even brew that shit in Baltimore, right? 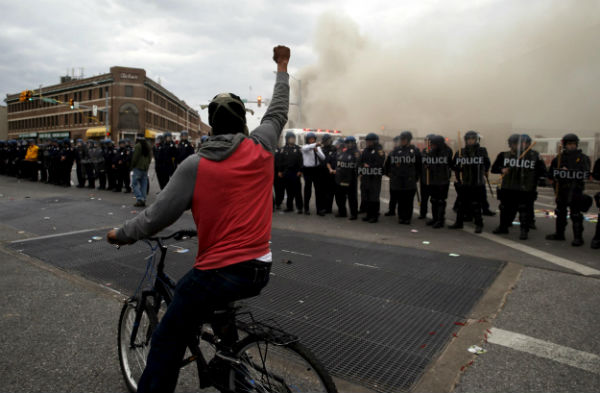