Ever since Molly and I made the decision to move to Los Angeles, I began imagining a very cinematic version of our departure.

In the version in my head, we loaded up the car, put on cool sunglasses, then drove off into the sunset while the acoustic version of Aloe Blacc’s “Wake Me Up” played. We were so filled with hope and optimism as we went out to find our new lives.

It was almost exactly five years ago that I moved to Baltimore. I had just finished getting my bachelor’s degree in English (with a minor in religious studies) from Virginia Commonwealth University. While I waited for the job offers to come pouring in from all of the lucrative English factories, I had to contemplate where I wanted to go next. Lars Periwinkle, one of my oldest friends and my podcast co-host, generously offered to let me crash with him in Baltimore.

I am an introvert who tends to prefer reading quietly in my room to going to raging parties or loud clubs. I have resting serious face. But, in Baltimore, for the first time in my life, I felt like I really found a balance between being social and antisocial.

The best decision I made in Baltimore (and possibly in my life) was doing improv. Through classes, then through becoming a member of the Baltimore Improv Group, I met the best people. Trying to list them all fills me with dread akin to a Best Actor in a Motion Picture winner trying to rattle off acceptance speech names before being played off the podium, so I won’t try to list everyone for fear of missing someone important. But I will say that it was through improv that I met one of my best friends, Andy McIntyre. And through improv I also met my fiancée, Molly.

I really felt like, for the first time in my life, I was able to find a real community. I felt like a part of something, surrounded by amazing people who inspired me to push myself creatively. I know I’ve become more confident and happier. And honestly, it was because I found this supportive and fun adult playground that I had the confidence to leave it all behind in search of something more.

There are definitely things I will miss about Baltimore as a city; specifically the tasty crabs slathered in Old Bay and the endless supply of cheap Natty B’oh beer. But what I will miss most is the people.

As sad as it is to say goodbye to a community that has embraced you wholeheartedly, it is nice to have an excuse to tell everyone what they mean to you before hitting the road. It pushes you and the people you care about to have meaningful final conversations where you tell each other how much your friendship has meant. For a stoic Irishman such as myself, this is no small feat.

I was always a fan of the final episode of television shows. You’d get to see characters embark on new adventures, typically selling or leaving behind whatever iconic apartment, bar or office building they had spent the bulk of the series hanging out in. All of the characters hugged and wished each other well before going there separate ways. It was a really satisfying bit of closure.

It turns out that really does happen in real life, too. And it’s kind of amazing. Heartbreaking and emotionally overwhelming at times, but also amazing.

Plus, saying goodbye to Andy and our friend Sarah allowed me to live out a dream I didn’t know I had. Just as the four of us were starting to get emotional and there were possible tears on the horizon, I got to White Fang Andy to break up the tension, yelling “Go on! Get!” to him. It got a big laugh from everybody and kept us all from becoming weepy messes.

I forgot to play “Wake Me Up” on my iPhone on our way out of town. We left before sunset. Traffic was horrendous getting out of Baltimore. And it all felt more melancolohy than I had anticipated. But having driven an incredibly scenic (if you don’t count Nebraska) 3,000 miles across America and arriving in beautiful Southern California just in time to celebrate Indepedence Day, our send off, and my life in Baltimore, feels like an idyllic dream.

I’m sad to leave so many amazing people behind. But they aren’t really gone. They are all still with me in my heart. And, more tangibly, my Facebook page.

Now, go on, Baltimore! Get! I don’t want you anymore! 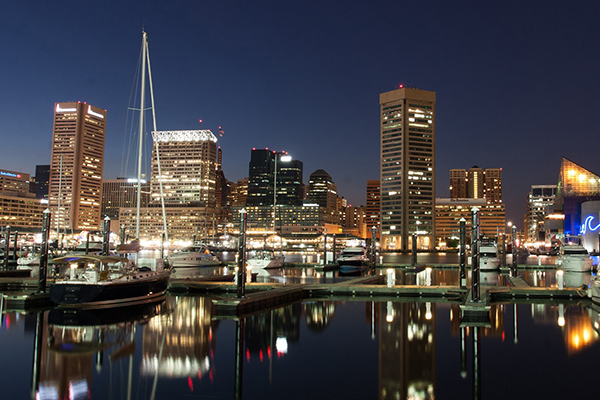