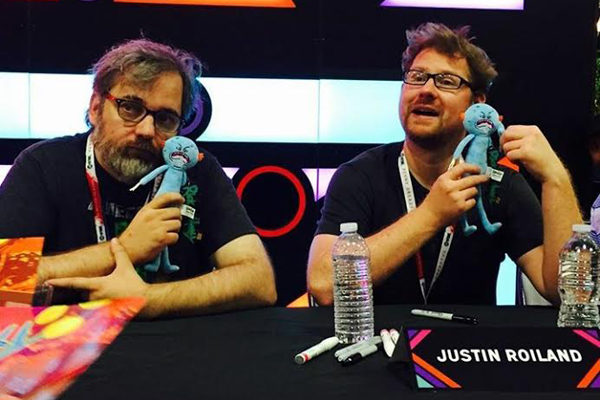 What began as a quirky loosely-based parody of Doc Brown and Marty McFly in Back to the Future has evolved into an intergalactic/interdimensional animated sitcom about a dysfunctional, but well-intentioned family of misfits.

The complexity and brilliance of Rick and Morty isn’t surprising if you’ve been tracking the careers of its two creators. Dan Harmon has made a name for himself as the architect of the beloved, deconstructed sitcom Community and Justin Roiland is known by Channel 101 fans for his scifi cloning comedy House of Cosbys (as well as the voice of the Earl of Lemongrab on Adventure Time).

We talked to Roiland last year about season one of their brilliant Adult Swim show, so with season two rapidly approaching, we caught back up with him and Harmon to talk new character combinations, the trouble with clearing DMX songs and the unique experience of attending Comic-Con.

You guys are getting ready to come back for season two of Rick and Morty. The show seems beloved. The network’s been really supportive. You guys have this big fan base. Is that a good feeling or are you guys kind of terrified of your success at this point and a bit concerned about the new season?

Dan Harmon: I think if we were terrified of our success, we got that out of our system at the beginning of writing season two. That was the time to be terrified because we didn’t know what that meant, our responsibilities were, et cetera. Now that episodes have leaked, among them probably our least favorite, and people still liked them, Adult Swim has been so supportive and has doubled down on that support for season two. I think basically at this point, not to speak for Justin, but we’re kind of on cloud nine.

Justin Roiland: Yeah. I would agree with that. It’s amazing.

So, what was the approach? When you guys sat down, how did you tackle season two? What was the thought process going in?

Roiland: Aside from just being a little overwhelmed with the response and sort of having that weight on our shoulders creatively, we approached it the same way we did season one, in just terms of pulling ideas. I think one of the changes we made is we were thinking, well, obviously right out of the gate, how can we top ourselves? Which is never a good thing, but also what different pairings of the family can we play with that we didn’t do in season one?

Like what would happen if we put Rick and Jerry together or Rick and Summer together? And what kind of stories would come from that? And just filling the white board up with ideas and just following the ones that made us the happiest. But yeah, we definitely, I don’t know if it was a conscious decision, but I think that we’re much more intergalactic this season, a lot more space travel as opposed to dimension hopping. There still is dimension hopping, but there’s a lot more actual space travel going on this season, which I think is something we did a little bit in season one, but we had a lot of fun doing that in season two.

Were there any pairings that surprised you guys when you started mixing and matching people? Did you get results you didn’t expect or saw aspects of characters that you hadn’t seen?

Roiland: I would say Rick and Summer, probably the one that started to surface toward the end of season one. You know, we did the “Needful Things” episode, and also we did the sex robot, Gazorpian, story line with Rick and Summer.

In season one, we enjoyed those storylines. We enjoyed writing Rick and Summer stuff, and I think we found in season two that that’s a strong pairing, for sure. I mean, equally as strong possibly as Rick and Morty together. We had a lot of fun with that going into season two.

The way you guys used “X Gon’ Give It To Ya” in that episode was so wonderful.

Roiland: You have no idea how hard that was to clear.

Were DMX’s lawyers difficult to deal with?

Roiland: No, it was that DMX is off the fucking grid. The guy is off the grid. It was impossible to clear because – or, it was not impossible, we did it, but it was very hard because he doesn’t use the Internet. I don’t even know if he has a phone.

Harmon: He only has that dog as his sole recourse to social networking.

Harmon: It was like a Law and Order episode. The guy that wrote the beat is unloading fish off a truck while he’s talking to us. “Sure. I wrote a song with DMX. I wouldn’t do it again.”

“After he finished, he just vanished.”

“Come on, we don’t do vanished at NYPD.”

Roiland: I also talked to three different managers who we were all told that this is his manager, and every one of them said, “I’ve been fired. He fired me.” We finally found a guy who was his actual manager, and that’s how we did it.

Harmon: It was the dog.

Harmon: And that was the easiest deal we ever made.

Roiland: Yeah, 50 cents … I didn’t even mean that to be a reference to the rapper, but it should. 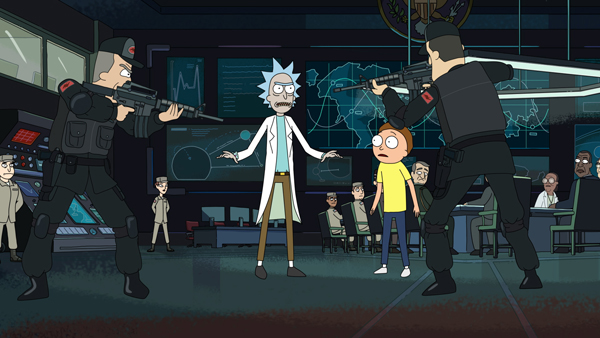 What is the episode that leaked that you said you’re not excited about?

Harmon: We were just very nervous about the very first one.

Harmon: Because it was very complicated and hard to write. The ratio of frustration to joy was high, and typically that skews our perspective on something. I guess great things have been made that way, but as a creative, you tend to resent things that are difficult, because why should they have to be? We’ve all created quite a lot of happiness for people effortlessly. We’ve all experienced that, so when something is hard, it’s like, “Fuck this thing.” So, every little detail of that episode that’s not perfect, we kind of go, “Oh, this piece of crap.”

Roiland: I was the more vocal one, and I think I said something somewhere that got quoted during a rough patch on that episode that we were still trying to fix and ultimately I think it turned out. I mean, hindsight being 20/20, I think it’s fine. I mean, some of the larger problems that I had with it are still present, but I haven’t really heard anyone else but me vocalize those issues, so I’m just happy so far that people seem to really like it.

What are you guys most excited about this season?

We got to screen one of the later episodes at Austin, at the ATX Festival, and it went over so well. It’s just such a fun episode. Without getting too spoilery, it kind of has a music component to it, which we had a lot of fun with, and it’s just absurd. It’s really, really great. It’s our first sort of dipping our toe in the water of music-based stuff. It’s not a musical by any stretch of the imagination, but it has music components to it. I’m excited for that one to air, but there’s just a lot of really great stuff coming this season that I can’t wait for people to see. And I’m really excited to hear what the reaction is. What are people’s favorites? And, you know, I’m curious.

Will there be any Dan Harmon freestyle rapping in the musical episode?

Harmon: No. There should be. There absolutely should have been.

Have I done it? … No, oh yeah. I did the Flu Hatin’ rap in season one. Yeah, we’ll figure it out. There’s enough musical joy coming up in this season.

Roiland: There would have been a perfect opportunity to put that in the music episode, but I didn’t think about it.

Harmon: Yeah well, I didn’t either. This guy’s the only one in the room that thinks of me and rapping as going together.

Justin, do you feel all of the recent Bill Cosby allegations and revelations have tarnished the legacy of House of Cosbys?

Roiland: No listen, here’s the thing. Here’s my thoughts on Bill Cosby, is he was a hero of mine. I looked up to him. I loved the guy growing up, and I was heartbroken when that shit hit. I was fucking bummed out. I was like, you know, just, it sucks.

It’s like there’s no heroes. There’s no good guys. It just fucking bums me out, and it’s emotional. It makes me want to cry, like seriously. It’s fucking sucks. And you know, I had always thought, “Oh, I’ll go back and finish the House of Cosbys thing,” but it’s like, I’m not going to touch it now. There’s no way to do that unless it’s a rape joke, and … who cares? It sucks.

I can’t even watch The Cosby Show.

How was San Diego Comic-Con?

Roiland: It was awesome. It was really fun. My voice is still recovering. I can’t do Morty right now. I have pick ups soon, so I got to get that sorted, but yeah, it was awesome. The fan reaction is overwhelming and magical to see.

Did you guys get to do any exploring, or were you pretty much just stuck to your events?

Roiland: No, it was equal parts – I don’t want to call it work because it was fun – but equal parts promoting the show and panels and then just having fun going around. Comic-Con is always such a clusterfuck because, at least from my experience, you can’t plan anything. You’ll say, “Hey, let’s meet up at Comic-Con” to somebody and you’ll try your hardest and you’ll never cross paths with them.

Like a lot of time spent at Comic-Con is trying to meet somebody and then by the time you get to where they were, they’re gone to somewhere else. So you go to that place and then they’ve gone somewhere else, or vice versa. Their people are trying to go to where you are and you’re not there. So that’s a lot of what Comic-Con is. And it’s just an adventure along the way. You sort of have an end game that never really comes to fruition, but along the path you’re having fun and running into people.

But it’s a blast. It’s just crazy. There’s nothing quite like Comic-Con, I don’t think. 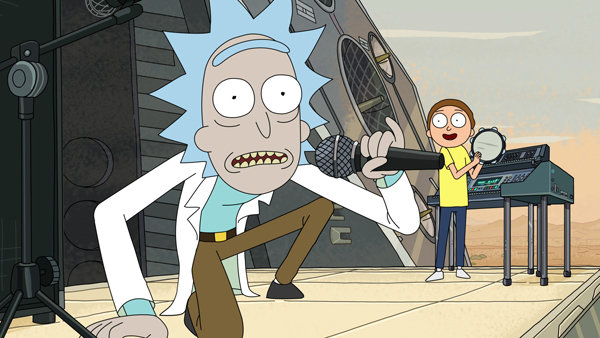