Here’s the thing – you already know the ending. Whether we’re talking about Old Yeller, Turner & Hooch or any movie in between, when it comes to a tale about a man and his dog we all know how the story plays out.

But the criteria we ultimately use to judge whether or not the movie was a success is how they get us to that point. People like dogs. And if the movie starts with a cute puppy face, forget about it. Folks are already hooked.

From there, if the story is compelling and the actors make us care enough to become emotionally invested, then at the end of the day we’re all happy. If not, then you’re pissed off because after two hours you’re left with nothing more than a “well, that sucks” kind of feeling.

Marley & Me is the story of John (Owen Wilson) and Jennifer Grogan (Jennifer Aniston), a couple of young journalists who after marriage relocate from Michigan to southern Florida. Jennifer catches on with The Palm Beach Post and immediately finds success, scoring front-page stories while our narrator John, who lands a job with the South Florida Sun-Sentinel, is stuck writing obituaries and blurbs about garbage fires at the local dump.

Compounding the situation is the fact that John can sense his wife’s biological clock ticking, so he confides in his friend and colleague Sebastian (Eric Dane), who suggests Grogan give her a puppy to stave off any baby talk for now. That’s when we meet Marley, or “discount puppy” as he’s originally dubbed.

From the first moment Marley (a yellow labrador retriever named after Bob Marley’s “One Love”) hits the screen, it’s clear he’s like no other pet. While adorable, it’s easy to see why Marley is often referred to in the movie as the “world’s worst dog” as he chases the mailman, the UPS guy, steals the Thanksgiving Day turkey and tears apart anything and everything in his path.

The Grogans’ first attempt to bring a child into the world ends in a miscarriage. When they do finally have children, Jenny ends up walking away from her promising career to become a stay-at-home mother. John, meanwhile, begrudgingly ends up becoming a columnist even though he’s always dreamed of being a straight-news kind of writer who makes the world a better place one byline at a time. Everyone seemingly struggles as they continue down a path they didn’t exactly foresee at the beginning of their journey.

Adjusting to the new role is even more difficult for John when he sees Sebastian head off to take a job with the New York Times in the exact kind of role he always envisioned for himself. Tension and hostility take center stage as Jenny resents John and John envies Sebastian. So much so that the viewer is suddenly wondering – is this movie still a comedy?

I guess that’s one of the biggest issues I had with this movie. While enjoyable, I’m not exactly sure what director David Frankel was going for. The movie is based on Marley & Me: Life and Love with the World’s Worst Dog, which was a New York Times bestselling autobiographical book by Grogan that was published back in 2005. By all accounts, the book was widely popular because of Grogan’s humor and the tone of the story. Unfortunately, the movie fails to convey this. One moment your entire family is laughing as Marley tackles and dry humps the obedience trainer (played by Kathleen Turner) and the next, you’re pausing it to explain to your kids what a miscarriage is.

And while we all know this story’s conclusion, I couldn’t help but question why everything was dragged out. We all grow old. Dogs do too. But the final chapter of this movie was painfully long in an attempt to get every last tear out of the audience.

There is a lot to like about Marley & Me. Alan Arkin, for example, steals every scene he’s in as he plays Grogan’s boss at the newspaper. Wilson was serviceable as the “straight man” while Marley got the laughs. Aniston was solid, even though her character started the movie as a promising young journalist in love who became a bitter and jaded house mom who sacrificed her career to raise her family.

But I do have one simple question – this movie spans over nearly a decade and a half and yet, neither John nor Jenny Grogan age or change one bit. We see three different stages of Marley’s life and their three children grow as the story progresses, but Wilson and Aniston look almost completely identical in the beginning and end of the movie. What’s up with that?

Bane’s hair begins to turn grey by the end of the movie, which means someone on set thought about it, but Aniston’s hair went unchanged for more than 13 years. I’ve yet to meet a woman who doesn’t change her hairstyle less than twice a year. Sprinkle some grey in there and give her a new look. It’s small, but that’s the kind of stuff that gives more credibility to what you’re trying to do.

The Blu-Ray version I reviewed had a ton of bonus content. The “Finding Marley” featurette taught viewers that a total of 22 dogs actually played the lead role. For example, a dog named Clyde played Marley for the main chunk of the movie because he’s mischievous by nature and a dog named Jonah was brought in when they needed a more subdued pup on set. The “When not to pee” featurette taught us that yet another dog, named Brodie, is actually trained to lift his leg and pretend to pee on command. The “Gag reel” is must-see, if for no other reason than to see trainers attempt to get Marley to hump random people or objects while Owen Wilson quotes Silence of the Lambs. There were plenty of other features on the disc, but those stood out the most.

All in all, Marley & Me is a good movie. There are some cute moments and while the dog is absolutely destructive, you still can’t help but love Marley at the end of the day. I guess I’m just not sure folks would want to subject young kids to the movie (unless you’ve got the rest of the weekend set aside to console your bawling children). 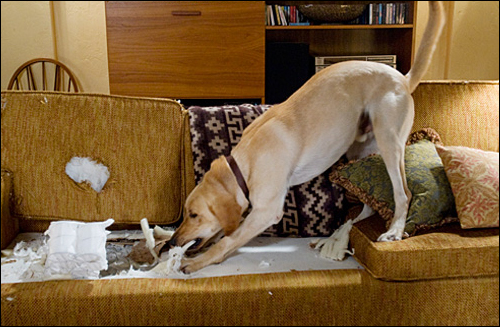 Written by Brian Murphy. Marley & Me is available now on Blu-ray and DVD.