Vampires and werewolves are a hot commodity these days. Since Hollywood has never been able to stop itself from running a good idea into the ground, there are currently countless TV shows and movies out there featuring these iconic supernatural entities.

That means that to stand out in a world oversaturated with these creatures of the night, any good vampire/werewolf show needs to find its niche. True Blood appeals to those who like their mythical creatures oversexed and delightfully southern. Twilight has cornered the market on supernatural entities as sparkly parables for teen abstinence. But there are still plenty of uncharted avenues to explore within the genre. All it takes is one creative writer to come along and shake things up a bit.

Unfortunately, that writer does not work on ABC’s new summer show The Gates. It seems as if the creative forces behind The Gates actively set out to make the most clichéd, predictable vampire/werewolf show on the air today.

In fact, the show is so paint-by-numbers that I had no choice but to give its premiere episode the old One Shot treatment …

(Side note: As per usual, I’m far too lazy and unmotivated to go learn these character’s names, so I’ll be assigning generic titles to these characters as I go along.)

We quickly learn that “The Gates” is the name of a posh gated community (wonder how long it took the developers to come up with that brilliant name?) surrounded by giant impenetrable walls that are, of course, guarded by a bumbling, idiotic security guard.

We are introduced to the Monohans (which, I believe, is Latin for “one hand”). Papa One-hand is the new police chief of The Gates. Taking a page from Die Hard (and countless other cop movies), we learn that Chief One-hand was a detective in Chicago who accidentally shot an unarmed man, so he took this job in this supposedly quiet neighborhood to get a fresh start. We also meet Momma One-hand and their two kids, Charlie and Forgettable Younger Sister.

Chief One-hand quickly starts ruffling feathers in The Gates by investigating the mysterious disappearance of a contractor. The Contractor was last seen in front of the house of … let’s call them Mr. and Mrs. Vampire. The Contractor was talking on his cell phone while driving, which distracted enough to almost run over Little Girl Vampire. The Contractor manages to cut open his head on the steering wheel when he slams on the brakes, so Mrs. Vampire invites him in to treat the wound. You can guess how that turns out.

Mr. Vampire returns home from his business trip and is not pleased to find out his wife murdered The Contractor. However, when Chief One-hand comes snooping around, Mr. Vampire helps her lie to the chief and then later helps dispose of the body and the truck (ditching the truck in the woods and making it look like The Contractor was attacked by wolves). However, he later scolds her, warning her that her actions could blow their cover and jeopardize their custody of their adopted daughter.

Chief One-hand is immediately suspicious of the Vampire family, but no one seems to take his hunch too seriously. The developer of The Gates advises him to drop it, lest he upset the town council. The chief’s request for a warrant to search the Vampire’s property is also denied. So, following the clichéd cop story handbook, Chief One-hand goes rogue and searches their property on his own. Mr. Vampire catches him and One-hand claims he had a report of a prowler on the loose. Mr. Vampire is unconvinced.

Meanwhile, Charlie One-hand adjusts to life at his new high school. Following in a long and storied cinematic tradition, his teacher has conveniently tailored his lesson plan so that it directly relates to the plot of the show. In this case, the teacher has the class reading Flannery O’Connor, which facilitates a class discussion about blending in with society when saddled with a deformity. Charlie talks about O’Connor’s battle with lupus (which, he tells us, is Latin for “wolf”) and argues that O’Connor believes that appearances matter and that assimilation is important.

Charlie’s comments impress one of his female classmates. She tracks him down after class and convinces him to join Mock Trial. Sticking to the clichéd plot handbook, she too is an outsider in town who is nonplussed about living in The Gates. She quickly falls for Charlie’s good looks and sensitivity, but she is of course already dating a meathead jock (who also happens to be a werewolf). Meathead Jock immediately hates Charlie and gets jealous of the way his gal fawns over him. Before long, Outsider Girl convinces Charlie to help her test out a lie detector (don’t ask), which reveals Charlie’s secret crush on her. Meathead Jock, who is apparently a human lie detector, studies her pupils and body language to uncover her feelings for Charlie.

Meathead Jock naturally wants to go all “Teen Wolf” on Charlie, but another one of the werewolf boys in the neighborhood talks him out of it. This other werewolf also tries to talk Meathead into joining his wolf pack, but he politely declines.

Mama One-hand manages to stumble across two other occult figures in the town – a pair of witches running competing holistic medicine shops. One of them uses her magic for good, giving people herbal potions that improve their lives, while the other one is secretly giving her customers potions to control them. Mama One-hand unknowingly ends up in the shop of the evil witch. But with any luck, someone will drop a house on her before she does anything too nefarious to Mama One-hand.

The episode ends with Mama One-hand throwing a wet blanket over top of the chief’s hunch and convincing him to drop his investigation of the Vampire family. She says that after shooting that unarmed man and uprooting the family to The Gates, he owes it to them to keep a low profile and to not go rocking the boat too much. (Yes, she actually plays the “You Accidentally Killed A Guy” card in the first episode. She seems delightful.) Just when he is ready to drop the case, he gets a call informing him that a body has been found in the woods. He heads to the crime scene, thinking it might be The Contractor, but instead discovers that it’s the police chief he replaced, who everyone thought had retired to Mexico.

Final Thoughts: Seriously, this show isn’t even trying. Every single thing that happened has happened in another show or movie countless times before. The characters are incredibly bland. The only thing The Gates has going for it is that Rhona Mitra, who plays Mrs. Vampire, is incredibly hot, but since this is on ABC and not premium cable, there’s not even any hope of seeing her naked. I just can’t see who this show would appeal to. If you want to see a show about vampires and werewolves, there are so many better options out there. There’s no point in investing yourself in one that makes you feel like you’ve already seen in countless times before. 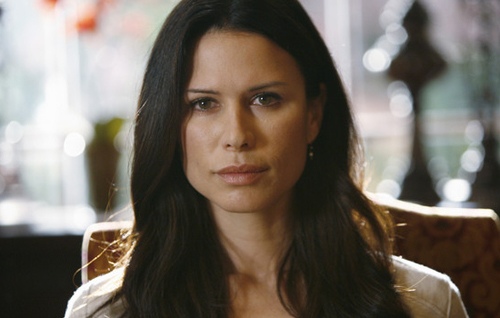