In front of the fans in attendance at the “A Leap of Faith: A Quantum Leap Retrospective” panel at Comic-Con, Scott Bakula announced that Donald P. Bellisario, creator of Quantum Leap, is currently working on a movie adaptation of the sci-fi show and has already secured the backing of a “big time Hollywood producer.” However, Bakula told the crowd that he and costar Dean Stockwell are now too old to reprise their roles.

As the wise philosopher/alt rocker Brian Aubert once said: “I’ve been waiting for this moment all my life … but it’s not quite right.”

Longtime readers of this column already know that I am a big Quantum Leap fan. Sure, it was often cheesy and at times borderline unwatchable, but on the whole Quantum Leap was a great show with a fantastic premise and an incredibly loveable main character. I’m convinced that on some level Dr. Sam Beckett, with his homespun farm boy charm and mastery of spin kicks, helped shape me into the man I am today.

A big reason for that is Scott Bakula. He was the perfect actor for the role. It’s not easy to convincingly fake Sam Beckett’s overwhelming wholesomeness. Luckily, Bakula never had to. From all indications, Bakula really is as kindhearted as his on-screen persona. In fact, when I interviewed Diedrich Bader, he told me, “I think the most pleasant set I was on was Scott Bakula’s show, Quantum Leap … Everybody was really happy, Scott was a great lead. He was just a really nice guy and he kept everything really positive.” He went on to add: “Every morning that he came in, when he was first called in, he would shake the hands of every single crew member and say their name.”

The guy is a real life Sam Beckett (minus the doctorate, time machine and lecherous, cigar-chomping hologram sidekick, of course). And, quite simply, he can’t be replaced. A Scott Bakula-less Quantum Leap is no Quantum Leap at all. Sam Beckett may possess the ability to become someone else, but no one other than Scott Bakula can become Sam Beckett. It simply won’t work.

Remaking old franchises with young actors has become big business in Hollywood these days. Sometimes it works, like in J.J. Abrams’ youthful rendition of Star Trek. But most times, we end up with things like Channing Tatum playing Duke in a G.I. Joe reboot. And that’s where this remake is headed – some young, mouth-breathing, former male stripper punk douching up a character I loved as a child.

Not only will the actor they end up casting inevitably be wrong for the role, but making the character too young will also severely limit the story. In case you have forgotten the premise of Quantum Leap, the way it worked was that Dr. Beckett could only time travel within his own lifetime. So the cutoff point for how far back in time the character can go is whatever year Bellisario decides Beckett was born. If you cast a 25-year-old lead, the farthest he can go back in time is 1985.

Besides Bakula, one of the reasons the original show worked so well was because it had the 50s, 60s and 70s to play with. Sam could leap into an old black man bravely sitting at a counter in a “whites only” restaurant or a mother swept up in the women’s liberation movement who feels trapped by her family or a Marine in Vietnam in the same platoon as Sam’s soon-to-be-killed older brother. There were a lot of different themes and historical moments to explore in those eras.

The 80s sucked. Outside of The Goonies being released, there weren’t a whole lot of memorable things happening in 1985. It was a decade of Ronald Reagan, excess and horrible fashion. The less time spent revisiting the it, the better.

The 90s aren’t much better – sure, I love the music and the flannel shirts as much as the next guy, but unless Dr. Beckett is leaping into Courtney Love’s body to possibly save Kurt Cobain, there really isn’t much for him to do in that decade either.

Even if they go older than 25, it still won’t be easy to find someone to fill Scott Bakula’s shoes. In fact, when I thought it over, only two possible names came to mind – Zachary Levi and David Tennant. However, upon closer examination, I realized neither actor quite works.

Chuck Bartowski and Sam Beckett both require the same type of genuine wholesomeness to play, which is why I think Levi could handle the role. Plus, there is such a strong resemblance between the two that Scott Bakula actually played Levi’s father on Chuck. However, the downside is that Zachary Levi is only 29, which means the movie would still be stuck in the 80s.

David Tennant is 39, which at least opens up the 1970s for storyline purposes. He also possesses the requisite charm and wholesomeness. And, like most Brits, I’m guessing he can pull of a convincing American accent. The downside to Tennant though is that casting him in a time traveling movie would feel too much like a retread of Doctor Who.

Still, maybe one of these two could work. Or maybe I’m missing someone else who could fit the bill, either an established actor or an unknown waiting to be discovered. Perhaps there is actually someone out there besides Scott Bakula who can actually play a fairly convincing Sam Beckett.

The question is, why? Why bother to find a cheap imitation when you can still have the real thing?

Scott Bakula is only 56. And, as I mentioned above, he just did a stint on Chuck, which required him to be a convincing superspy. Maybe he can’t get his leg up as high as he used to for those spin kicks, but if we all tolerated a 66-year-old Harrison Ford in Indiana Jones and the Kingdom of the Crystal Skull and 69-year-old Sean Connery in Entrapment, I think we can handle watching a 56-year-old Scott Bakula in this film.

So if you are reading this Bellisario, do the right thing and give the role back to Bakula. I don’t want to have to wait for God or Fate or Time to send a futuristic Dr. Beckett back to right this horrible injustice. Give all of us Quantum Leap fans the moment we have been waiting for since the show went off the air. Let us watch Scott Bakula once again don that skintight white unitard and fire up the smoke machine as he steps into the Quantum Leap Accelerator and vanishes.

Do the right thing, Bellisario. That’s what Sam Beckett always did. 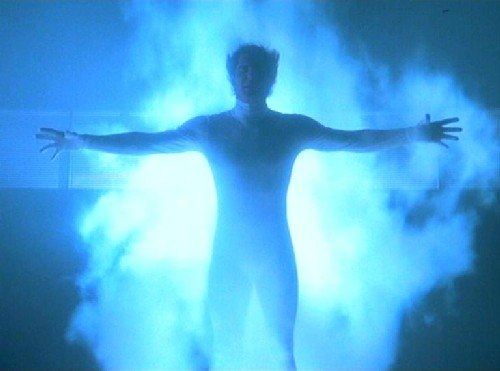