This week, HoboTrashcan is celebrating its five-year anniversary by bringing back five defunct site features. I wanted to join in on the fun too, so I decided to bring back a part of Murphy’s Law that hasn’t been seen on this site in a long time – “Things that piss me off.” It was a reoccurring feature on this column when I first started out in 2005, but it’s something I haven’t done in more than two years. I hope you all enjoy it.

And, as always, these are in no particular order …

The Nissan Cube. Are you fucking serious, Nissan? This car looks like something the animators behind Rocco’s Modern Life would draw at three in the morning when their hands started cramping up and they really just wanted to go home for the night.

Raw onions, and people’s misguided belief that they belong on sandwiches.

Live action/CGI-ed version of animated series. Garfield, Alvin and the Chipmunks, Marmaduke and Scooby Doo all sucked. The live action/CGI Yogi Bear, Smurfs and Bugs Bunny films currently in the works are going to suck too. If you want to make these characters look 3D, then make the entire movie computer animated like a Pixar film. Or just stick with hand-drawn animation and focus on writing a good story (and not Looney Tunes: Back in Action). Fully CGI-ed versions of these iconic characters look creepy and wrong. Oh, and they have dead eyes. The CGI is never very convincing and the real actors eye lines are usually off just enough to make it appear as if they are looking near Scooby Doo instead of right at him. So just stop it.

Everyone who went to see Vampires Suck. $18.5 million in its first five days? Really, America? What is it about Seltzberg’s “Hey, remember this thing?” style of humor keeps drawing you back into theaters? Why do you continue to reward these talentless douchebags? Go watch Spaceballs or Airplane. That’s what a parody movie is supposed to be like. If you keep settling for crap like this, they are never going to make better movies. You are better than this, America.

The scene in Scott Pilgrim vs. The World where he asks Ramona out on a date. When watching a movie like Scott Pilgrim vs. The World, I am perfectly willing to suspend disbelief. I can handle the over-the-top video game style battles, the quick cuts that jump characters forward to a new time and place and even the fact that Scott pulls a flaming sword out of his chest in the final showdown. But Scott’s plan to see Ramona again by ordering something off of Amazon makes absolutely no sense. If she worked for UPS or FedEx, I would get it, but when has Amazon ever sent an employee door to door to deliver their packages for them? Do you realize what that would do to their overhead? It’s just not cost feasible, damn it.

(And if you didn’t understand the above rant, you piss me off too for having not seen Scott Pilgrim vs. The World yet. Did you not read my column from last week? It’s a better action movie than The Expendables. Stop rewarding Sylvester Stallone for mediocrity and go see a movie that is actually good.)

The wires inside headphone cords that always end up getting bent and stop working properly, forcing you to jiggle them around just right to get sound in both ears.

Qdoba. You may have others fooled, Qboda, but I’m on to your little game. I see you for what you truly are – a cheap knockoff of Chipotle. You are the fast food burrito chain equivalent of those “Rolex” watches you buy from NYC street vendors or the movie company Asylum, who keeps churning out films like DaVinci’s Treasure and The Day the Earth Stopped. I don’t want your meat anywhere near my mouth, you imposters.

Sonic. Why are you such a tease, Sonic? I see your commercials on TV all the time advertising your tasty treats and yet there aren’t actually any Sonics anywhere near me. Why get me excited for the prospect of having girls on roller skates wheeling a breakfast sandwich and an order of mozzarella sticks out to me any time of the day if you’re not around to deliver the goods? Dicks.

The fact that Jimmy Fallon is still on television five nights a week.

Louie. Louis CK is, without a doubt, one of the funniest stand-up comedians alive. His act is brilliant. His show, however, is not. There are times when it is incredibly funny, but it misses the mark just as often as it hits it. I keep watching for the moments that are truly hysterical, but I have to keep sitting through some really bad television to get to them. (Did you really have to devote an entire episode to how much your mom sucks? I get it, you don’t like her and its cathartic to yell at a fictional version of her on television. But it’s not entertaining.)

People who stop in the middle of the aisle in the grocery store, ensuring there isn’t enough space to either the left or right of them and their cart for anyone else to get by.

It’s Always Sunny in Philadelphia. This one pains me to write, since I love the first three seasons of this show so much. You were great, Sunny. You were an edgy, unpredictable show that managed to make me legitimately laugh out loud several times an episode. But starting with season four, your jokes became forced and your whole act became stale. You started repeating bits like Green Man and the Day Man/Night Man songs just to placate fans. You headed down The Family Guy’s path of mediocrity and, like that show, your popularity continued to grow as your show got less and less funny. What angers me the most is that you make me sound like one of those indie music-loving wankers who turns on their favorite bands when they make it big. I want to still like you, It’s Always Sunny. I want to be happy for your success. But you just aren’t very good anymore.

Every cell phone provider I’ve ever had or ever will have.

Columns that don’t have a cohesive final paragraph that ties everything together nicely in the end. 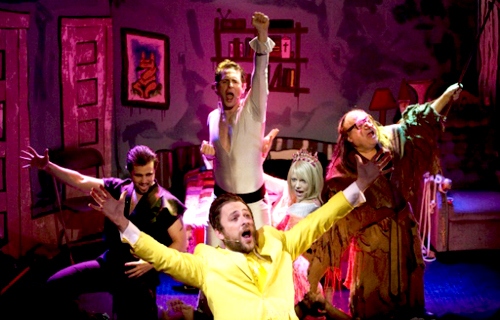 Hobo Radio 616 - Doctor Who?
Silver Linings Playback 55 - Garfield: A Tail of Two Kitties
Hobo Radio 551 - Face-to-fur encounter (Hobo Madness Finals)
Hobo Radio 549 - Big Frito and the Murder Hornets (Hobo Madness Elite 8)
Hobo Radio 458 - I should have been listening before
Hobo Radio 444 - Sorry if we've disappointed any of you at any point throughout our journey
Comments(14)