As you may have heard by now, Family Guy writer-producer Alec Sulkin apparently decided that Friday’s earthquake in Japan was perfect ground for one of his “hilarious” tweets. His response to the fifth-worst earthquake in recorded history? “If you wanna feel better about this earthquake in Japan, google ‘Pearl Harbor death toll.’”

Now, this certainly isn’t the only offensive comment about Japan going around on Twitter. (Hell, if you want to see just how stupid, badly educated and idiotic Americans can really be, go to Karma Japan, a Tumblr that has been weeding out the assholes by collecting insensitive and frankly stupid tweets about how the earthquake was karmic retribution for the documentary The Cove. It’ll really wake you up to the casual, ignorant cruelty on the surface of this nation.) But this one gained a lot of traction because Sulkin is a writer for an inexplicably popular and supposedly funny TV show.

The debate was basically about whether it was appropriate or not to joke about a tragedy immediately after it’s happened. Defending Sulkin were a lot of people speechifying about the grand history of 1970s comedy (one particularly deluded woman reminded us that Lenny Bruce was arrested for his act in the 70s; I hope someone reminded her that Lenny Bruce was actually dead by the 70s) and that comedians have to push the envelope of what’s appropriate. Vilifying Sulkin were those who saw this idiocy comment for what it was: a disgusting comment that reduces people to statistics to be, as Brendan Connelly said, “tallied in a historical spreadsheet of deaths” as if there were “a desirable, karmic distribution to be had.”

But the bottom line, as others pointed out (particularly James Urbaniak on Tumblr), is that there’s simply no joke in that tweet.

First of all, if you do google the Pearl Harbor death toll, you will see 2,350 people died. How about we google the combined death toll from the bombs at Hiroshima and Nagasaki? Somewhere between 150,000 and 250,000. Feel better now? (How about we google some pictures of Japanese internment camps from the 1940s?) Is this supposed to be the punch line to a joke? Because if it is, it’s not funny, it’s tragic, making it a particularly shitty joke. So there’s just as little pay-off to this “joke” as there is a set-up.

It’s just a dumb, racist comment. There’s really no defending it, despite the people who are bending over backwards to do so.

There’s been a lot of defense of Sulkin, as though the fact that he’s a comedy writer should automatically excuse him for his comment. If you look at the man’s Twitter feed, you’ll see a lot of particularly misogynistic tweets, too. (Which is unsurprising, since he writes for Family Guy, the show that has never once considered that there’s a possible scenario where punching a woman might not be hilarious.) I don’t feel the need to excuse those as “just” jokes, either. I understand that comedy writers — even terrible ones — traffic in offensive material. But the great comedy writers use that as a springboard for something revelatory, something universal or to expose something ugly about society. The bad comedy writers only get as far as the offensive part and, well, that’s the whole joke.

It’s not enough to shock people with your callous assholery. Funnily enough, that’s why I despise Family Guy so much: the writers seem to pat themselves on the back for simply being tasteless and shocking, then say job done and put it on the air instead of, say, using that tasteless shock to make a point about something — anything — about human nature. Instead, the joke is just that someone did something tasteless and shocking. And that, to me, is the spirit of Sulkin’s tweet: that he said something tasteless and shocking and expected people to just get that that itself was the joke. He came across like a child smearing his own shit on the walls to shock his mother; no point, just the shock, and the smug satisfaction in the power that comes with it.

It’s not a joke. Either Sulkin is an asshole or he wrote something that makes him look like an asshole. Personally, I would argue that even feeling the need to scurry and find something funny to say about the death of 10,000 people makes you an asshole. And I think Sulkin knows it was an asshole thing to say, because he’s since taken the tweet down and apologized. I think it’s too little, too late — the damage has already been done — but I understand why he’s trying to save face now. But I also think I know where the surprising number of racist Asian jokes come from on Family Guy …

But if we’re talking about comedy, I’m surprised that no one took the opportunity to get some digs in at the show itself. I mean, there were a lot of comments about how “we already knew Family Guy writers were juvenile and unfunny” and about the show’s (and most shows, to be fair) dumbed down view of history and the wider world. But did no one even think that Alec Sulkin should be applauded for at least knowing what a current event even was? This guy writes for a show that still thinks OJ jokes are timely and topical; I think one of the real surprises about his tweet isn’t that he thought remembering Pearl Harbor would make anyone feel better about anything, but that it didn’t appear 15 years too late.

Okay, maybe my joke’s not funny, either, but at least you can figure out what the joke’s supposed to be … 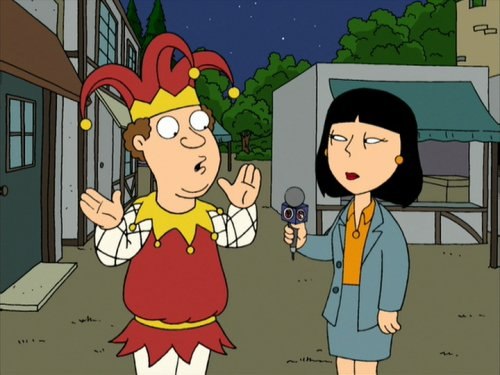