This weekend I went out to see a movie. I haven’t done that in two years, and in that short amount of time, the theatergoing experience hasn’t really changed. It has, sadly, remained the same.

What follows is a record of the stupidity that occurred when I went out on a Sunday afternoon to see a 1:45 pm showing of Thor.

1:30 – We arrive at the theater. When I was a kid, 15 minutes used to be plenty of time. Now I’m worried that we’re not early enough to catch the endless stream of previews. Hey, I like previews, what can I say.

1:32 – Oh, good, it’s still flashing ads on the screen. The commercials haven’t even started yet. Damn, now I have to watch commercials later …

What I need now is for my wife and I to get good seats in the center — we never go for the stadium seating because everyone and their gay uncle is up there making all kinds of noise, and I don’t like crowds. The key here is to get in the back row on the floor, because then no one can sit behind you. Having someone sit behind you is truly irritating. If anything, that’s the real benefit of stadium seating: the people right behind me are eight feet away.

1:37 – The nice thing is that Thor is playing here in 3D, so the majority of people went to that show instead of to this 2D one. So while they’re all self-inducing headaches for Mother’s Day, I get to deal with less people. Less people is always good.

There’s still the sorority sisters back in the stadium area, though … damn, they are obnoxious.

1:40 – The commercials begin. I still resent them. A lot. Besides the fact that they’re all supremely obnoxious — trust me, even if an angel could be sexually attracted to anyone (read your damn bible), they wouldn’t be attracted to a desperate, sweaty little desperado with shitty hair who thinks that Axe Body Spray is a reasonable substitute for deodorant; those angels need to stand in a crowd of those people at a video game demo at a comic book convention and take in the overwhelming smell of body odor and aerosol and tell me they’re really quivering between their legs — I also resent the fact that my ticket price is basically subsidizing an advertising outlet. I’m literally paying to be shilled to.

1:42 – There’s a kid running around yelling “Arriba! Arriba!” I wish he would run this way so I could trip the little fucker. Seriously, parents, what is wrong with you? My parents taught me to be quiet during a movie, even when it’s just commercials. Parents who are okay with their children being indecorous in a movie theater are just not good parents. You aren’t. It’s a fact. Change, or live with the fact that we all despise you and are hoping that your child runs into something and bashes his head open.

1:45 – The previews start. Some of them are good. My wife will later give me hell for actually sort of liking the X-Men: First Class trailer. I don’t know, it looks watchable. She says it’s so self-serious that it looks like a 10 year-old putting on a production of Uncle Vanya with action figures. I think we’re both sort of right.

2:05 – The previews finally end, and the “1:45 showing” of Thor begins. Naturally, at least seven more people walk in to the movie and sit dangerously near me. How is it that, even in this day and age when there is an endless stream of commercials and previews before every show, there are still people who manage to walk in just as a movie is starting?

I hate these people. Their eyes can’t adjust for nearly a full minute, but they still insist on stumbling around looking for empty seats, talking to each other about where they should sit and generally taking their time. Excuse me, but we were on time, we don’t have to put up with how disorganized you are.

Seriously, what is it with these people? Taking their time like show times don’t actually mean anything? And what’s with cinemas, with an ever-growing pre-show program that encourages these people? I pick my seat with care so that I don’t have to be too bothered by the existence of other people, and then you come in and force yourself into my little self-involved bubble? Not cool, man. Not cool at all.

Just show up on time like the rest of us. It’s impolite otherwise. And if you really can’t avoid being late because of outside circumstance, just be quiet about it. I’m trying to watch this superhero flick set up its entire premise, and now I’ve got to listen to you talk to each other about “Where do we sit?” and “Has the movie started already?” And then you invariably sit right in front of me, necessitating that I move from the seat I’ve been sitting in for the last half hour because I could be arsed to show up on time.

I watch movies to escape from you people, not to be reminded that you exist.

2:08 – That kid is still talking loudly and no one’s doing anything about it … Remind me to have the wife’s womb sewed shut. If she isn’t making the same mental note herself right now.

4:15 – The movie ends, thoroughly enjoyed. There’s a tag after the credits, which means people stop filing out to just stand there, slack-jawed and gaping, instead of sitting back down. The sheep look up …

4:21 – In the car and on the way home, and wondering if it’ll be another two years before I venture out among humanity to pay to watch commercials again. Strangely, though, I have the urge to buy an Acura, the official car of Thor, which appears on the screen many times … no, just kidding, product placement doesn’t work.

But I wonder if the Thor video game is any good … 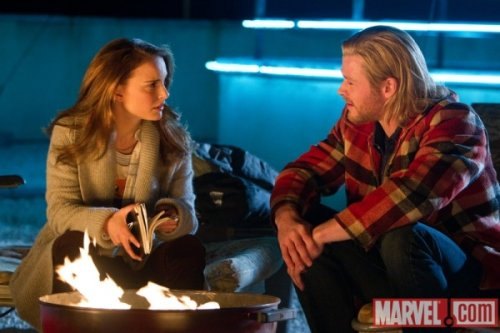