I always thought “planking” was that thing I do to your mom every night.

But thanks to an article on the NY Daily News website, I recently discovered that planking is “an Australian stunt fad that involves being photographed while lying flat on random objects.” And it seems that this fad has made its way across the pond to America.

This trend has apparently been around for years, but has begun to pick up momentum recently. There is an official website called iPlanking.com that offers photos, an official store and even a helpful how-to guide (because apparently there are people out there who can’t figure out how to “lie facedown, hands straight down the sides” without written instructions). And recently, the first ever “International Planking Day” was held. The NY Daily News article also reveals that the trend has found its way to Hollywood, where celebrities like Kristen Bell, Ellen Page, Flavor Flav and Lost creator Damon Lindelof have all posted photos of themselves planking.

Obviously, a lot of people are really enjoying this craze, so what I have to say next is going to be hard for some of you to hear. But, like the child in “The Emperor’s New Clothes,” someone needs to bravely step up and state the obvious. So, for those of you in denial right now, allow me to be the one to break it to you – planking is really, really stupid.

As someone who has lived through snap bracelets, Pogs and the “Macarena,” I can confidently tell you that planking is the single dumbest trend I’ve ever seen. It’s not funny, it’s not cool and no one looks good doing it. You should all stop immediately and just pretend this never happened.

At best, your planking photo looks like you are auditioning for Christopher Reeve’s role in the 1970s Superman movies. At worst (and unfortunately, far more likely), you just look like you are humping whatever random object you are on top of. (Seriously, look at that photo of Lindelof at the bottom of this post – he’s definitely fucking that coffee table.)

Back in my day, we took plenty of photos of people laid out on the ground or on top of random objects. But the people weren’t proudly posing for these shots as part of some meme or game. They simply drank too much and passed out on something and we took great joy in taking photographic evidence of their collapse (often times drawing a variety of pensises and hilarious messages on their faces with Sharpies before taking the shot). These photos weren’t something to proudly post on your Twitter account. No, instead they were something you hoped you never got tagged in on Facebook, where your parents and coworkers would be able to see it.

Back then, people had the good sense to be embarrassed to end up in a photo like that. But now, it’s becoming a badge of honor. I just don’t get it. Now, Flava Flav willingly degrading himself in public isn’t really surprising, but I tend to think of Ellen Page, Kristen Bell and Damon Lindelof as smart, respectable people who usually make sound decisions (overlooking, respectively, those Cisco commercials, When in Rome and Nikki and Paulo). The fact that they have all given into this craze just makes me sad.

Also, as the trend gains more popularity, people are looking for more extreme places to take their photos. Some have already planked in front of famous monuments and various dangerous locales. Last month, an Australian man was arrested for planking on top of a police car. In 2009, seven doctors and nurses at a hospital in England were suspended after taking photos of themselves planking on resuscitation carts, the floor of their ward and even the building’s helipad.

But, worst of all, last month a 20-year-old Australian man actually fell to his death while attempting to plank on the seventh-floor balcony of a high-rise building. It’s a senseless death and one that just has to be impossible for his family members to explain at the funeral. I can just picture the blank stares and confused expressions as the mourners attempt to summon up even a half-hearted, “Really, it could have happened to anyone.” Honestly, if it were my kid, I think I’d just tell people he died from autoerotic asphyxiation. I feel like that’s easier for people to comprehend and will gain the deceased more sympathy.

So I say we stop this trend before more really lame deaths occur. It’s time for planking to go the way of snap bracelets and Pogs. And it’s time for celebrities to go back to posting the photos we really want to see on Twitter – shameless shots of their cleavage. 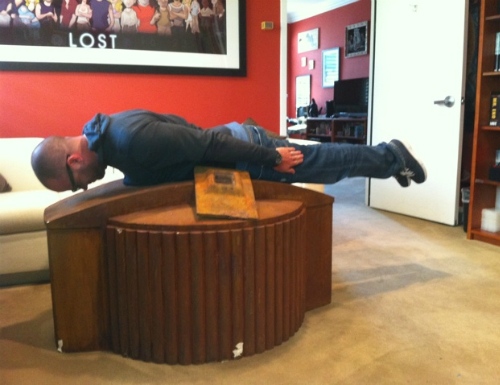