James McAvoy and Michael Fassbender are getting a lot of praise heaped on top of them for their performances in X-men: First Class and rightfully so.

After Brett Ratner “Brett Ratner-ed” the franchise with 2006’s X-Men: The Last Stand and Gavin Hood put the final adamantium nail in the coffin with 2009’s X-Men Origins: Wolverine, this comic book property was in desperate need of a reboot. The only option left, outside of just chucking everything previously established and starting from square one (which would mean losing Hugh Jackman as Wolverine, as well as officially undoing all of the good that Brian Singer did in those first two films), was to do a prequel. The only problem is that most prequels are horrible and pointless films that have no real stakes and tend to rely on ham-handed fan service and constant references to future events over any actual plot or entertainment value.

Miraculously, director Matthew Vaughn and his team of writers found a way to make a prequel that doesn’t suck (which puts him in a category with The Godfather: Part II and … well, nothing else). But Vaughn had an even bigger problem on his hands – he had to find two actors who could live up the iconic performances given by Patrick Stewart and Sir Ian McKellen in those original films. On paper, that seemed nearly impossible since McKellen is just completely phenomenal in everything he does and Stewart was born to play the role of Charles Xavier. (Seriously, I don’t even think he screen tested – I imagine he just showed up on set one day in a wheelchair.) Plus, the on-screen chemistry those two had together was just phenomenal, which sold the emotional weight of their conflict.

Somehow, against all the odds, McAvoy and Fassbender pull off the roles. They have chemistry together in spades. (Seriously, it’s almost uncomfortable how great their chemistry is – I imagine shippers all over the Internet have been hard at work on their Professor X/Magneto slash fiction these past few days, stories that undoubtedly involve Magneto wearing nothing but that ridiculous helmet). But more importantly, they just nail the parts. It actually can’t be overstated how phenomenal Fassbender is; he completely owns the movie. And McAvoy makes the Professor X role his own by creating a more youthful and lecherous Charles Xavier, but one that still feels true to Stewart’s original portrayal.

It’s refreshing just how great the two actors are in the film. It’s just too bad that McAvoy decided to add in one little mannerism that damn near ruins the entire movie.

For some incomprehensible reason, McAvoy decided the best way to show the audience Professor X’s telepathic abilities was to raise his fingers to his temple every time he read someone’s mind. Every. Single. Fucking. Time.

I don’t want to give too much away in case you haven’t seen the film yet, but Charles Xavier uses his powers a lot in the film. McAvoy’s fingers are practically glued to his fucking temple. It reaches Christian Bale’s “Cookie Monster Batman Voice” levels of obnoxiousness. If you turned this into a drinking game, you’d be dead by the second act.

It’s like a bad 1950s sci fi movie. His scenes should all be shot in black in white. All that’s missing are a few crudely-rendered wavy lines or circles on the screen and some eerie music to play in the background to really hammer home the idea that Charles Xavier is reading someone’s mind, lest we the idiotic audience members fail to grasp the unfathomable concept.

Beyond how stupid it looks, I feel like it would hinder your ability to read someone’s thoughts effectively, since they inevitably would just be thinking, “He’s not really doing the whole ‘fingers to the temple’ thing, is he? What a pretentious asshole. Want to know where you can stick those fingers, Professor Douchebag?”

I’m not really sure why McAvoy thought it was a good idea to convey “mind reading” in the most cartoonish and obnoxious way possible. And furthermore, I’m not sure why Matthew Vaughn never said after a scene, “Okay, the finger to the head thing was funny, but now lets do a real take.”

Patrick Stewart doesn’t put his fingers up to his temple to let you know he’s reading someone’s mind in those original films. He doesn’t have to. In fact, all it takes is a squint from Stewart and McKellen saying, “Sneaking around in here, Charles. Whatever are you looking for?” to make it abundantly clear in the opening minutes of X-Men that Professor X is a telepath. It’s subtle and it doesn’t treat the audience like they are two years old. (Oddly enough, McKellen actually puts his fingers up to his temple as he delivers that line, but he does it to be snarky.)

Making matters worse, in First Class Emma Frost has the same exact ability as Xavier and she never once puts her fingers up to her temple to let you know she’s using her powers. January Jones takes a lot of heat for her acting, but this is one time where her apathetic performance paid off.

(Side note: For the record, I actually think Jones did a fine job in the film. All she was really asked to do was have boobs and be bitchy and, frankly, she nailed it.)

While I know that Professor X only gets paralyzed from the waist down, if they make a sequel I’m really hoping that they write in that his ability to raise his hand all the way up to his head has been severely impaired as well. Otherwise, I just have to hope that once Vaughn and McAvoy looked at the finished film, they realized just how obnoxious that gesture really was and decide to just pretend it never happened.

But will they actually fix it in the next go around? How should I know – I’m not a mind reader. 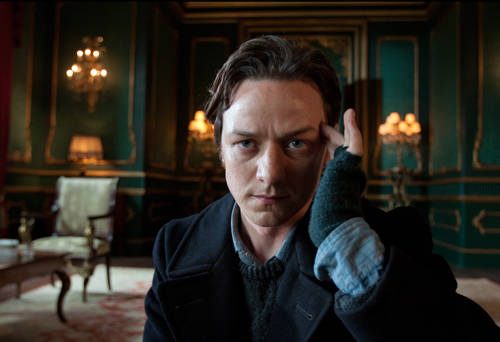