It’s true; the Burger King was taken down in a bloodless coup over the weekend. His forced transition from power was orchestrated by his own company and a newly-hired advertising agency, who have decided that a better way to advertise their fast food is slow-motion shots of vegetables being chopped.

The Burger King is but the latest casualty of the freshness advertising fad. In a world where even 7-Eleven and Target are advertising crisp and wholesome food, in a world where Subway has convinced everyone into thinking the food that sits behind the counter for days and days is healthy and fresh, the Burger King was dismissed as a remnant of the can’t-die-soon-enough hipster culture. Stoners were momentarily disappointed at the loss of a creepy icon, but then a cartoon animal said “titty” on Adult Swim and the resulting giggle fit was enough to make them forget the Burger King had ever existed and necessitated a 3 a.m. trip to Taco Bell.

Though I note the loss of another fast food mascot, I think it’s the best for the Burger King to head into retirement. The man who began as a benevolent ruler of a kingdom of burgers had ignobly ended his career as a creepy stalker, wordlessly handing food to people who should know better than to eat something given to them by a stranger, lying in your bed and awaiting your wakefulness with the rictus of a frozen smile molded onto his plastic face, his dead eyes seeming to communicate a wish to watch the entire world burn into flame-broiled nothingness. The Burger King is simply being released from his misery in a way that, to be honest, he has seemed to crave for the past decade.

Now he can recover in comfort, sitting around the table with other retired mascots, trading memories of the 1970s fast food arms race with Mayor McCheese, or discussing the place of royalty in an increasingly democratic world with the Vitamin King. I have no worries for the Burger King. I believe he once would have welcomed death. Now he can heal out of the public eye, perhaps awaiting another reboot for those of us who genuinely love retro without being so smug about it… Hot Topic kids.

And though the wordless, slow-motion vegetable slicing of the new commercials is virtually unnoticeable, I applaud this new tack in BK advertising.

Not because it somehow changes the actual health quality of the food itself. And not because I somehow have a yen for fresh and clean food (my doctor can attest to that). And not even because I like this idiotic trend in America where we pretend that food is magically healthy just because we say it is.

No, I applaud this new direction because the Burger King commercials of the past 10 years have been truly, maddeningly awful.

If this means no more hipsters with flutes extolling the virtues of a bowl of everything on the menu mashed together, I’m all for this. No more assholes in the drive-thru choosing to fight back at the grind of American life by throwing a temper tantrum because he can’t have a Whopper. Yes, Americans love the Whopper. I think about that every time I go to a Burger King and hear someone order a Big Mac …

I’m still trying to forget those idiotic “Whopper Virgins” commercials, where Burger King scoured every corner of the planet for a bunch of ethnic stereotypes who had never eaten a Whopper before. At the very least, it inspired a funny Saturday Night Live sketch. But it was also a condescending way to beg people to eat a Whopper instead of a Baconator.

And most insulting of all to anyone with a modicum of self-respect, there was that horrible commercial where, to the tune of Helen Reddy’s “I Am Woman” — an anthem declaring feminine self-empowerment — a bunch of the worst male stereotypes ran riot in a city dismissing fine dining as “chick food” and complained “I Am Starved” and demanded blue collar respect through the incredibly masculine act of eating a Breakfast Croissan’wich.

It would almost have been funny if it had meant to be a parody of the dick-brained Maxim reader, trolling Xbox Live and waiting for that Axe Body Spray to finally lure in the honeys, already — that scared Chuck Pahlaniuk reader whose terror of and frustration towards women has twisted into a searing hate of anything remotely feminist, and who regards his own sub-literate Neanderthal rage as the very essence of masculinity in order to soothe and defend his tear-ridden impotency and his Family Guy-addled lack of motivation. But that horrible commercial did no such thing. Instead, it lauded that immaturity: the apotheosis of the stereotype. It said, very clearly, that real men have BK Stackers their way, god damn it.

So, honestly, if these sleek new commercials can entice anyone to eat Burger King without using stalking, whining, painful attempts at hipness, utter condescension and abject sexism, then retiring the Burger King is the best thing that can be done. We’ll see what happens when the freshness fad is over, but for now, at least that’s one more irritation off the airwaves.

Might I suggest McDonald’s consider a similar course of action and get those hand-jiving weirdoes and that guy who eats off of someone’s else’s spoon out of my face, too? 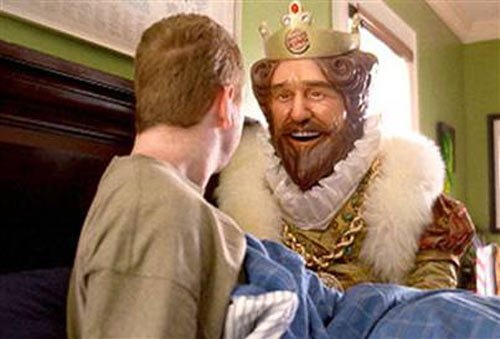