A few years ago, some genius ad execs trying to be hip and edgy released an online campaign for McDonalds that featured a guy leering at a Big Mac with the tagline: “I’d hit it.” The ad agency thought they were appealing to today’s youth by using cool modern slang. Unfortunately, failing to understand the real meaning of the phrase they were using, these modern day Mad Men had the poor unsuspecting model in the ad telling the world that he would fuck a Big Mac.

From time to time, I find myself wondering whatever happened to those ad execs. Were they ever able to escape the endless snickers and hushed jokes that went on behind their backs whenever they left a room? Did they ever live down the shame of trying to sell the world on a bizarre food fetish that only they and Jason Biggs shared? More importantly, was any company ever foolish enough to hire this ad team again?

I’m assuming that the answer to the first two questions is no and no. As for question three, while I can’t prove it, I have my suspicions that this same genius ad team may now be working for The CW, promoting the return of their show The Vampire Diaries.

You see, right now in New York and LA there are two large billboards advertising the return of The Vampire Diaries. The billboards feature a black background with white and red text that simply reads: “Catch VD.”

And that’s it. The words “Vampire Diaries” never appear on the billboard. There is no mention of The CW or the date and time of the show’s return. Just: “Catch VD.” If you are unfamiliar with this ad campaign – and, let’s face it, since this is a CW show we are talking about, chances are most people are unfamiliar – as you drive by these billboards, the only logical conclusion you can reach is that someone paid a lot of money to encourage you to get a STD.

Now, if these ads ran in Baltimore, Maryland, most people would probably just assume the local tourism board had finally started embracing the city’s number one export. But I imagine the people who pass by these billboards on Sunset Boulevard and Times Square are simply left scratching their heads in confusion.

I think it’s safe to say that, at this point, it’s not a very effective ad campaign.

However, this is only phase one of the campaign. Phase two, which will be implemented shortly, is to roll out a second set of billboards that feature three members of the cast and lists the show’s title, network and time slot. The second billboard features one of the show’s actresses in bed with two of her male costars. And, once again, it features the tagline: “Catch VD.”

Phase two is certainly more effective than phase one in that it actually gets the word out about the show. But I think its effectiveness ends there. How is this supposed to help sell the show? Sure, you have your attractive young cast members in bed together in provocative poses, but you are essentially telling the world that these stars are riddled with diseases.

(Fun side note: While I have no clue who the two other actors on the billboard are, I do recognize Ian Somerhalder from Lost. I thought being crushed by a plane and choosing death over having his leg amputated would be the worst decision he ever made, but clearly I was wrong.)

Of course, what separates this ad campaign from the old McDonalds ad is that they obviously know what they are doing here. They know what people think when they hear “VD.” The double entendre is intentional.

Though that’s not stopping The CW from playing coy. In an official statement, their spokesperson said: “VD simply stands for Vampire Diaries, and anyone who thinks otherwise should probably get themselves checked out.”

I imagine the agency’s defense of this ad campaign would be that it’s eye catching. We are so inundated with ads these days that it’s easy to just start tuning them out, so if an ad is actually able to grab your attention, then that’s a good thing. And “Catch VD” certainly grabs your attention.

But it doesn’t make you want to show. If anything, all it will make you do is think twice about ever shaking Ian Somerhalder’s hand if you ever met him in person. So how is that a good thing?

Still, while I feel like the billboards are a huge mistake, I do hope they actually succeed. With any luck, The Vampire Diaries will get a huge rating boost for their premiere and all the credit will go to these billboards. Then, next season as you drive along Sunset Boulevard, you’ll see giant billboards proclaiming “Gossip Girl makes it burn when you pee” and “Hellcats: It’s like herpes for your eyes.”

The comedic possibilities are endless. So here’s hoping this VD never goes away. 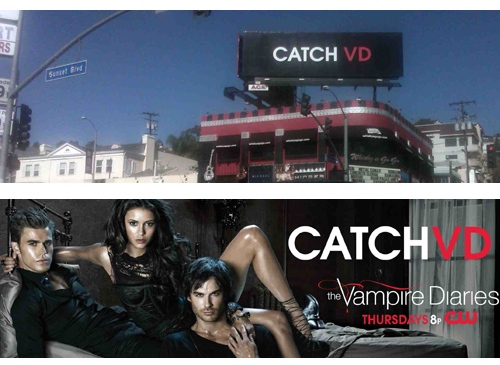