The bottom line is: it’s lazy. The characters are vague and underdeveloped, most of them stereotypes you’ve seen before in countless films (the evil rich guy, the inhumanly efficient and clever hero, the kooky African American criminal, etc.). The plot features a few twists, but you see them coming a mile away. Nothing in the film is very original, most of it just seems like a collection of things that were done (and in most cases done better) in other films. The protagonist and the villain have a literal chess match with each other at the beginning of the film – that’s how clichéd the writing is.

The story itself has a Law and Order “ripped from the headlines” vibe to it. Alan Alda’s character, Arthur Shaw, is a takeoff on Bernie Madoff, an extremely wealthy New York businessman who swindles countless investors out of their cash in a complex Ponzi scheme. Awaiting trial, Shaw is sentenced to house arrest in his lavish penthouse apartment inside The Tower, a highly protected and posh apartment complex.

However, the staff of The Tower entrusted their pensions to Shaw, so they lost their retirement funds along with everyone else. So the hotel manager, Josh Kovacs (Ben Stiller), conspires to steal the cash he’s convinced Shaw has stashed somewhere inside his apartment. For this mission, he recruits his brother-in-law/coworker (Casey Affleck), a recently evicted former Wall Street type (Matthew Broderick), a Jamaican maid who can crack safes (Gabourey Sidibe) and an elevator operator who has studied to be an electrician (Michael Peña). 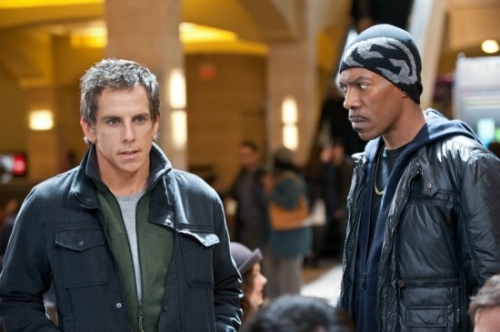 However, none of them have the street smarts needed to pull of this caper, so Kovacs turns to his old childhood acquaintance Slide (Eddie Murphy) to help them out. Slide is a two-bit hustler who has acquired quite a rap sheet over the years, so Kovacs thinks he’s their best bet to pull off the heist. And Slide is more than happy to help out once he discovers how much money is potentially inside the apartment.

While the film is lackluster, Eddie Murphy is highly enjoyable in it. He said in a recent interview that he wanted to start taking on edgier roles after years of doing family-friendly films and while Tower Heist isn’t really edgy or funny enough to work, it at least shows that Murphy still has the chops to pull off that type of role. He makes the most out of the material he’s given here and easily earns the bulk of the film’s laughs.

I also really enjoyed Téa Leoni as Special Agent Claire Denham, the FBI agent investigating Shaw. Leoni seems to end up in quite a lot of underwhelming comedies, but I do think she’s charming and capable of being funny. She’s not asked to do much in this film, but she does have one enjoyable scene where she gets really drunk with Kovacs. Drunk Téa Leoni is adorable.

The rest of the cast does the best they can with the material they are given. Alan Alda actually adds a lot to the character of Shaw that I don’t think was there on paper, making him seem more nuanced and interesting than he should be. Gabourey Sidibe and Michael Peña both earn a few laughs with their line deliveries. Ben Stiller is fine, though unremarkable. Casey Affleck, however, who has shown he has some real acting chops, seems like he’s on autopilot in this film.

While the story is lackluster, director Brett Ratner does at least give the audience a few visually interesting set pieces. The heist itself takes place on Thanksgiving day, so the massive Macy’s Thanksgiving Day Parade takes place in the background, which is fun to see. Plus, there are a few exterior shots involving characters hanging from a window at the very top of the apartment complex that looked quite cool (and made me just a little queasy).

But outside of a few funny moments and a handful of visually-pleasing scenes, there’s really no reason to watch Tower Heist. It’s a perfectly serviceable movie to view on an airplane or on cable one lazy Sunday afternoon, but there’s absolutely no reason to spend your hard-earned money to see it in the theater. 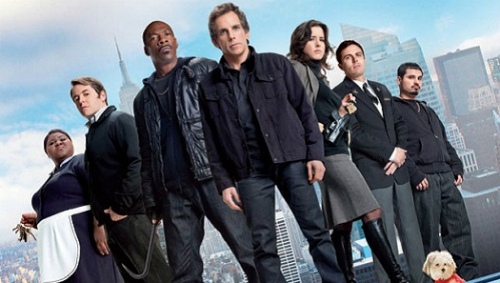