This week’s inductee into the “Overrated Hall of Fame” is … The Breakfast Club weed scene.

I was showing the movie A Breakfast Club to my students this week. You’d think a 26-year-old teen movie would bore the hell out of today’s high school seniors, but these kids were riveted. I’m not talking preppie little white kids either. I have 80 percent black students and only one honors class. The majority of my kids are the lower level types, which I specifically ask for because those are the very kids to whom a teacher can show A Breakfast Club without fear of any parents calling the principal to report my slacking ass.

Every single kid was engrossed in the movie. Most had never seen it, despite its almost daily showing on some 200-something channel on your local cable package. I’d look around and see the usual sleepers and fuck offs actually leaning forward on their desks. If someone dared talk, he’d get shushsed by six of his wanting-to-fuck Molly Ringwald peers. It’s an amazing phenomenon and it speaks to the timeless genius of that rare piece of 80s culture not deserving of being incinerated at ground zero of a nuclear strike.

But there is one part of this movie that bothers the hell out of me. No, not the fact that Carl the janitor is a good-looking, articulate gentleman with a wry, immediate wit, which I’m sure describes every custodian at your workplace. It’s not the complete inattention to the potential liability issues of leaving five horny high school kids in the library with no direct adult supervision. It’s not even the fact that possessing a firearm in school, or pulling a false fire alarm, or assaulting and injuring a fellow student, would result in a punishment no greater than spending a Saturday in the school library writing a punitive essay.

No, what bothers me most about this movie, what I find the most implausible, is the kids’ reaction to the weed they smoke. Other than the first couple of “high” scenes, the rest of their post-blaze-up behavior rings false.

Of course, being a teacher in a public high school, I must state right here and now that I am basing my judgment purely on observations and extensive research, for I have never, ever partaken of the drug cannabis. My ideas of what constitutes the normal “stoned” (that is the correct word to describe the effects of marijuana, right?) behavior are based solely on what I’ve read, what I’ve seen in movies and what my pastor and fellow church deacons tell me every Wednesday when we volunteer at the Just Say No center. Okay, that should suffice lest anyone in charge of my school system see past this Ned Bitters pseudonym and begin termination proceedings.

That very true confession being out of the way, I will take blogger’s license and write the rest of this as if I have, indeed, actually indulged in the inhalation of marijuana smoke, a.k.a. toking up, getting my high on, getting cheeched, toasted or ripped and other such euphemisms with which I, myself, am not personally familiar. (You got all that, Personnel Department?)

Right after the kids blaze up, their behavior is spot-on high. They laugh too much. They talk too much. They make no sense. That’s typical baked behavior.

But then things take a turn for the implausible. The conversation not only turns serious, but it also makes sense. It’s intelligent and interesting. It has depth. I’ve been around many high people, and I cannot once remember some stoned motherfucker making sense. But these kids are laying bare their greatest insecurities and vulnerabilities with extreme eloquence.

The stoners I’ve known are never eloquent. They ramble incoherently about grandiose plans they’ll never actually follow through on. (“Yeah, man. I’m just gonna quit my job and walk around the southwest for a year meeting Navajos and shit. I wanna get into Indian culture and take my mind to like another plane of consciousness. Or go to Denny’s maybe.”)

Or they discuss, with more seriousness that one might find in national security meeting, the relative merits of Kit Kats vs. Reese’s Peanut Butter Cups. Or they talk about their love of humanity on a grand, all-encompassing scale. In other words, everyone who gets high is immediately full of shit.

But not these kids. Heartfelt, lucid confessions roll out one after another, and even more amazing, the other kids actually listen. When I’m high [note above disclaimer, all you Central Office readers], I’ll do my share of babbling on in nonsensical fashion, and I know my weed-mates are nodding encouragingly while not really listening to the string of inanities coming out of my at-that-point very dry mouth. (Research, baby. Research.). I know I don’t listen to their theories on infinity or the impending zombie invasion. No one listens when they’re high. When stoned, you either talk or wait to talk. But not in A Breakfast Club. Actual conversation ensues, and all tokers know that one of the best reasons to get high is to avoid real conversation.

Then we have the bizarre scene when Emilio Estevez’s character, Andrew L. Wrestler (L. is for Lunkhead, of course), emerges from a smoke-filled room and goes on an aerobicized display of athleticism that would land him a silver medal in London this summer. He’s vaulting book stacks, running up walls a la Bo Jackson (Google it, all you young whipper-snappers) and throwing violent air punches.

If you, dear reader, have, unlike me (take note, Mr. Superintendent), sinned against God and nature by putting a tightly rolled marijuana cigarette to your lips and sucking in the sweet, smoky release said cig offers (so they tell me), then you know how hard it is to believe this scene. Hell, a person smokes weed to stop feeling that way. Instead, Andrew runs around the library as if his dutchie was laced with PCP. No one in the history of highness has acted like that when stoned.

Where was some half-stoned gaffer on the set who should have alerted the people in charge about this obvious error? Where was Estevez brother Charlie Sheen to warn John Hughes that such behavior is more often the result of six snorts of coke and four shots of Jack Daniels, which he could have demonstrated right then and there?

Finally, the high doesn’t last very long at all. Within an hour or so of blazing up, they are back to their normal, whiney selves, bemoaning shitty parents, the travails of negotiating the brutal halls of a public high school and – my favorite – the crushing, soul-deflating pressure of being rich, popular and good-looking in that public high school.

Come to think of it, maybe there’s more overrated stuff in this movie than I thought. I’d go into that right now but, uhhh …I gotta go not get high. 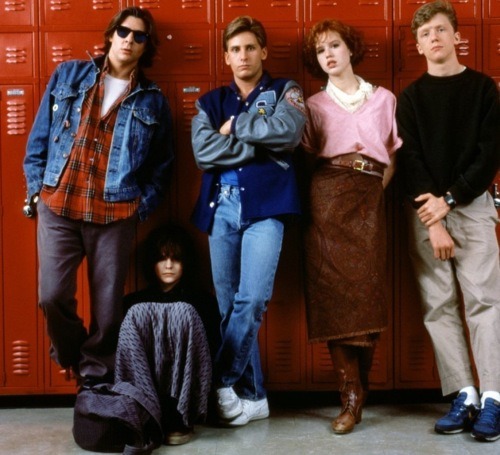